With DC FanDome just around the corner, the marketing efforts for the online convention has ramped up in recent weeks. It has been confirmed that over 300 guests will join the fun while the official schedule of the event has shown that over 30 panels about current and future projects of DC will be showcased.

While the focus of many fans have been centered around the DCEU films and Arrowverse shows, a panel dedicated to the gaming realm of DC was confirmed ahead of the virtual convention. Warner Bros. Games Montreal, developers of Batman: Arkham Origins , will have a 20-minute panel during DC FanDome, and the company is expected to reveal the title of the new Batman game.

Now, it seems that Warner Bros. Games has started to tease fans with the announcement as evidenced by a recent tweet.

Update: Another new teaser has been released from the Twitter account r3dakt3d . The brief video shows the elongated text "Enter Code 761". It's been pointed out by Batman Arkham Videos

It's been pointed out by Batman Arkham Videos that entering "761" after clicking and holding the button on https://r3dakt3d.com/ will reveal a teaser image for the mystery game, as shown below:

A new Twitter account in the form of r3dakt3d just released a short and ominous teaser about the upcoming Batman game. This was followed by a tweet from the official Twitter account of Warner Bros. Montreal which also featured the same teaser video.

The 25-second video showed a blink-and-you'll-miss-it tease of the logo of a secret society called the Court of Owls.

Meanwhile, Twitter user Batman Arkham Videos pointed out that a new site was also launched today which hints at an official announcement for tomorrow, August 18, at 11AM EST/8AM PST.

WB Games Montreal has finally started teasing their new game in preparation for the reveal at the #DCFanDome. A new site, https://t.co/p35jUaJSI7, has been launched with hints at the announcement for tomorrow August 18, 8:00 AM (Los Angeles) / 11:00 AM (New York) / 4:00 PM (UK). pic.twitter.com/hTvzwkNdS5

For those unaware, Warner Bros. Montreal has been teasing this Batman game for quite some time now. Last year, the company shared a video that commemorated Batman's storied history in various forms of media, but it also showed four mysterious images that made fans (and gamers) create their own theories.

@WBGamesMTL is proud to celebrate Batman’s 80th anniversary with rest of the world during #BatmanDay #Batman80 pic.twitter.com/4VGz9kBWxj

In addition, DC comics writer Scott Snyder also shared a previous tease of the Court of Owl's involvement in the next Batman game by retweeting the tweet of Warner Bros. Games Montreal along with the hashtag, "#bewarethecourtofowls: "

With that in mind, it's clear that the several teases from WB Montreal will finally be revealed during DC FanDome, and this freshly-released video might have just confirmed the big villain that Batman will face during the game. For the uninitiated, the Court of Owls is a secret society from Gotham that controls the city from the shadows, and uses assassins called Talons to keep their interests in check. 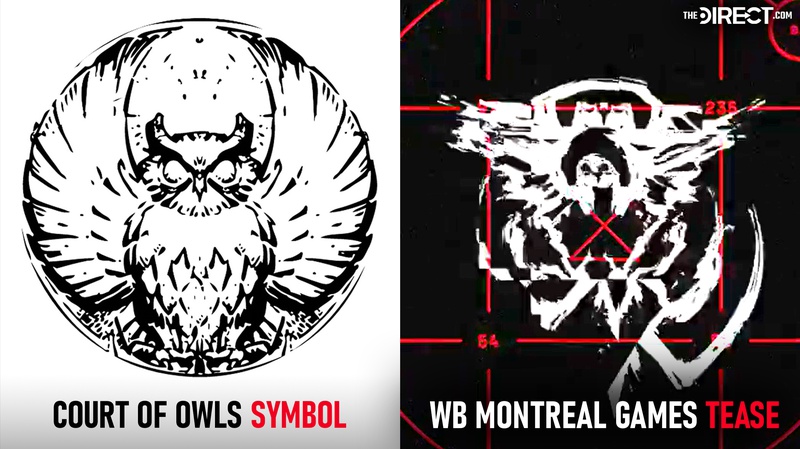 Previous teasers from WB Montreal have also surfaced in the past months that revealed another set of symbols alluding to the other known factions of Gotham such as the Sacred Order of Saint Dumas and the League of Assasins. It is likely that an all-out war between the aforementioned factions could take place during the game, with Batman at the center of it.

There is no doubt that the combination of conspiracy and espionage along with the presence of the Court of Owls will surely elevate the next Batman game into much greater heights. Hopefully, more concrete story details and a potential release date will be revealed during this week's DC FanDome.