Anthony Mackie on Hopes For Bucky & Sam Romance: 'Homosexuality Has Been Exploited' 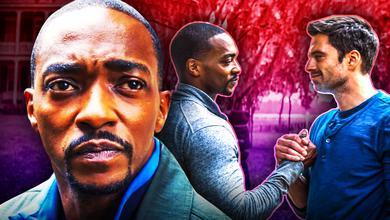 MCU fans have gravitated heavily to Marvel Studios' efforts with Disney+ stories in Phase 4, which is continuing in a big way after the first two episodes of Tom Hiddleston's Loki. Immediately preceding this multiversal madness was the much more grounded journey of The Falcon and the Winter Soldier which centered on Sam Wilson's evolution into the new Captain America.

Five of the show's six episodes shined a spotlight on the relationship between Sam Wilson and Bucky Barnes which has been brewing steadily since they first appeared together in 2014's Captain America: The Winter Soldier. The two grew from being reluctant partners to close friends by the time they defeated the Flag Smashers, giving a new depth to their bond after starting as mutual acquaintances of Steve Rogers.

However, through all this, there were certain signs of something more brewing between them, at least, according to a portion of the fan base. This led one of the show's co-stars to comment on how the outcries for a new kind of MCU relationship backfired in a way.

The Falcon and the Winter Soldier star Anthony Mackie spoke with Variety about the relationship between Sam Wilson and Bucky Barnes in the series. Specifically, he touched on how this era makes it difficult for two characters like this to simply be friends that love each other rather than being in a romantic relationship with each other.

Mackie admitted to feeling that there's an "exploitation of homosexuality" in 2021, making "the idea of two guys being friends and loving each other" a strange problem.

He looked back at how guys used to be able to "be friends" and  "hang out, and it was cool," but also at how "something as pure and beautiful as homosexuality has been exploited" by vocal people "trying to rationalize themselves:"

“So many things are twisted and convoluted. There’s so many things that people latch on to with their own devices to make themselves relevant and rational. “The idea of two guys being friends and loving each other in 2021 is a problem because of the exploitation of homosexuality. It used to be guys can be friends, we can hang out, and it was cool. You would always meet your friends at the bar, you know. You can’t do that anymore, because something as pure and beautiful as homosexuality has been exploited by people who are trying to rationalize themselves."

Through all this, Mackie expressed that it's always been important to him to "[show] a sensitive masculine figure" in his work. Although he admitted that "being a superhero and flying around and beating people up" is surely masculine, he spoke of how important "having emotional conversations and a kindred spirit friendship with someone that you care about and love" is as well:

"So something that’s always been very important to me is showing a sensitive masculine figure. There’s nothing more masculine than being a superhero and flying around and beating people up. But there’s nothing more sensitive than having emotional conversations and a kindred spirit friendship with someone that you care about and love.”

Mackie even looked back at the relationship his Sam Wilson had with Steve Rogers, in which "they admired, appreciated and loved each other."

Describing Sam and Bucky's partnership as one "where they learn how to accept, appreciate and love each other," Mackie clarified that it's less of a "bromance" and more of something that's "just two guys who have each other’s backs:"

The current era of entertainment has certainly taken the right steps forward in terms of representation, especially in giving same-sex relationships the platform they deserve. However, Mackie's quotes indicate that there's a point where it becomes more about exploitation than doing things the right way.

The MCU is at the forefront of this movement of representation, already having plans to bring the franchise's first gay marriage to the big screen in Eternals when it debuts in November. What shouldn't happen with this, though, is the destruction or elimination of friendships like the one Sam and Bucky have developed in multiple outings together.

In terms of this specific relationship, both Winter Soldier actor Sebastian Stan and director Kari Skogland have shared their thoughts on how Sam and Bucky's friendship is only platonic.

Even though fans have certainly been vocal about wanting this duo in a more romantic relationship, the relationship they have is still one that should be celebrated. Love is not confined to only those couples who are physically intimate with one another, and there is no need for limitations on people having best friends.

It wouldn't be fair to their characters to put them into a romantic bond simply for the sake of representation, especially when their first Disney+ series worked so hard to tell the story of how they worked through their differences to become partners and friends. As much as Mackie clearly wants people from all walks of life to be seen through the MCU, he still wants it done without forcing the issue.