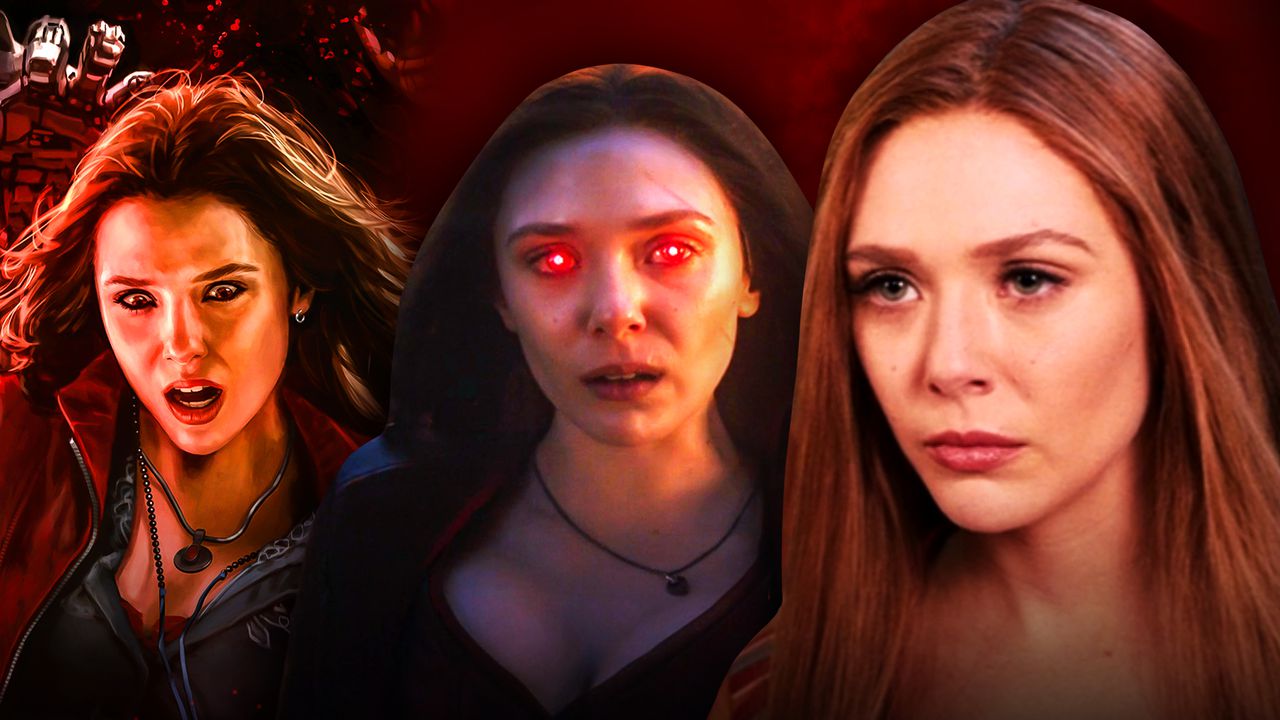 WandaVision is now a third of the way into its nine episode run, but fans still aren't quite sure who the main adversary will end up being in the Disney+ series.

Elizabeth Olsen knows this, and even teased that "at the end of episode three, you still don’t know what or who the villain is." But based on the evidence presented thus far, the answer could be right in front of us.

Many fans speculated that Mephisto or Nightmare could be tormenting Wanda Maximoff. Agatha Harkness could also have a role in the series, possibly masquerading as the nosy neighbor Agnes.

Another more “out there” possibility is that Scarlet Witch will be the villain of her own series. With the town of Westview seemingly responding to her every wish and desire, it is quite apparent that Wanda has an iron grip on the small American sitcom town. Additionally, WandaVision has been hinting at a darkness brewing within Wanda Maximoff, prompting The Direct to present all the evidence that could lead to her assuming the role of the big bad of her very own story.

Wanda's descent into darkness starts off lightly in WandaVision's first episode, but is still significant enough to seem unsettling. As Vision's boss Mr. Hart chokes on a piece of food in "Episode 1," his wife cackles as the hosts look on uncomfortably. As Mr. Hart's gasps for air become too much to bare, Wanda orders Vision to "help him."

Seemingly unable to act until Wanda asked him to, Vision instantly responds to her command. This was the first indication that Westview was fully under Wanda's control, implying that Vision seems to lack any sort of free will in this reality.

Comments from Westview neighbors Herb and Agnes in "Episode 3" suggest that something deeper is going on in the neighborhood. Dr. Nielsen, the doctor who assessed Wanda's unprecedented pregnancy, even directly addressed the fact that they are "trapped," saying that small towns are "so hard to escape."

To put things simply, everything in Westview seems to answer to Wanda Maximoff.

A WandaVision moment that has already become iconic among Marvel fans can be summed up in one word: "No."

A beekeeper bearing a SWORD logo coming to threaten Westview is dealt with swiftly at the end of "Episode 2," with Wanda rewinding the episode's events to get the ending that she intended. Wanda seems dead-set on preventing anything that could thwart her perfect life, no matter the cost.

Compared to her first prevention attempt, Wanda has ramped things up significantly. Not only is Wanda in control of Westview's characters, but the storylines they all follow as well.

The line, "No," is eerily similar to her famous line from the "House of M" comic storyline, "No more mutants," where Wanda altered the mainline Marvel universe to become a universe without mutants. Marvel Studios is clearly taking a page from Marvel's comic books by having Wanda take full advantage of her reality-bending abilities, creating a parallel between these two moments.

Wanda's dedication to the reality that she has formed could be her downfall, and send her into a dark spiral similar to her "House of M" counterpart.

"Episode 2" wasn't the only installment to feature a time reversal, though.

With so many strange occurrences going on in Westview, someone was sure to notice eventually. Unfortunately for Wanda, the detective would turn out to be the one she cares for the most. Vision starts to realize that not all is right in their quaint little town, piecing together some oddities that they have experienced.

When Wanda says she's worried that the town will figure out that they're hiding their superhero abilites, Vision expresses his own concerns about their new home in Westview:

Yes, I know what you mean. But it's more than that, isn't it? Mr. and Mrs. Hart, dinner. Outside with Herb. I think something's wrong here, Wanda.

Wanda looks back at Vision in shock, possibly fearful that her android husband has caught on to her game.

Then, what might be misinterpreted as a Disney+ glitch actually seems to be Wanda secretively altering the episode's outcome to one that she favors. The scene cuts back to right after Wanda shares her thoughts on the town, and this time Vision changes his tune in response, much more hopeful this time around:

"Yes, I know what you mean. The truth is, we are in uncharted water and you know what? I'm anxious too.

While Wanda acts as though she is none the wiser in the storylines of the sitcoms, it very much seems like she is orchestrating these events.

Interestingly, Vision fails to mention the incident with the beekeeper in his initial speech, indicating that her episode rewinds also reverse the memories of those around her.

Ultimately, Wanda only wants to hear what she wants to hear, and she is willing to manipulate others if it means being able to live in ignorant bliss.

A ‘WandaVision’ inspired skit featuring Elizabeth Olsen and Jimmy Fallon was revealed in ‘The Tonight Show with Jimmy Fallon.’
Matt Shakman debunked rumors that 'WandaVision' will have a tenth episode.
Matt Shakman said that the core element of 'WandaVision' is the exploration of loss and "how we come back from [it]."
See All WandaVision News, Rumors and Leaks on DirectFact

When Wanda's Sokovian accent comes out, you know things are about to get real.

Everything came to a head in the final moments of "Episode 3," where Wanda's darkness seems to have overcome her. In response to Monica Rambeau's mention of Ultron killing her twin brother, the Scarlet Witch jettisons the SWORD agent out of her reality — a move that seems uncharacteristically evil for an Avenger.

There was no one around to witness this except for Wanda's pair of crying newborns in the background. And when Vision returns, Wanda attempts to return to her sitcom role, but her performance feels false. As she looks down upon her children, holy, almost angelic music cryptically begins to play.

The music having divine connotations could actually connect to the third episode's commercial, which has the tagline "Release the Goddess Within." Perhaps this slogan was actually referring to Wanda being a goddess of this realm, ruling over it and altering it as she pleases.

The use of Greek imagery in the commercial could also indicate the kind of goddess Wanda aims to be. The Greek gods of Olympus were known to be awful people, to put it simply. The Olympians would frequently get into squabbles and would act selfishly to serve their own best interests. The religious connotations could be likening Wanda to these deities in this moment, implying that she is using her powers selfishly and possibly even at the cost of others.

The citizens of Westview may be in the know of what is really happening to their town, but seem to almost be held hostage in their new sitcom star roles. Herb keeps trying to tell Vision that they are "all..." before trailing off, unable to finish his sentence about why they are all in Westview. Even Agnes seems afraid of the consequences of letting Vision in on their unspoken secret.

Clearly Wanda's neighbors know something, so perhaps they saw firsthand what happens when you don't comply. How this reality came to be is still unknown, so perhaps an exploration of this could reveal what sort of hierarchy Wanda is running.

Like worshippers and their goddess, Westview's residents obey Wanda's every whim, whether they like it or not.

A primary inspiration for WandaVision was Tom King's comic book run on Vision. In that storyline, Vision created a cybernetic family to try to adapt to suburban life and get over his relationship with Scarlet Witch. Concerning coping mechanisms aside, WandaVision might be taking more than just the premise of the comic book itself, but also one of its most compelling characters.

Vision's wife Virginia is one of the focal points of Vision, inadvertently causing trouble. Trying to do her best in assimilating with suburbia, Virginia frequently runs into obstacles that prevent her from leading a normal life. When the Grim Reaper attacks her home and threatens her kids, Virginia absolutely pummels the supervillain into dust. A confrontation with another parent from her children's school also ends in tragedy, and although not directly caused by Virginia, it was her involvement that led to the fallout.

Wherever this metallic mom went in the Vision comic, darkness followed. Though she had the best intentions in wanting to protect her family unit at all costs, Virginia ended up being the accidental villain of the series.

Wanda Maximoff could be something very similar. Wanda is trying her best to live out her sitcom fantasies in peace, but unfortunately for her, there have been some consequences.

Whether she intended for this to happen or not, others have become entangled in this constructed reality. As much as she'd like to, Wanda just can't escape her life as a superhero. So, when she inevitably tries to exit this lifestyle, it spells for trouble. Fans don't know exactly what ramifications the Scarlet Witch is causing in WandaVision, but SWORD's involvement indicates that it can't be good.

In addition to borrowing from the Virginia character, Wanda seems to be adapting some of Vision's storyline as well. Both are using their creations as coping mechanisms for their mental states, with Vision using his family and Wanda using Westview as sources of comfort. While likely not intending to cause harm, the existence of Wanda's creation alone poses to a threat to its inhabitants, and potentially to the rest of the world as well.

Wanda Maximoff has endured much hardship throughout her tenure in the MCU, so can we really blame her for wanting a bit of a break?

Considering the trauma that underlies WandaVision's commercials, the Scarlet Witch seems to be suffering from mental health issues. Westview is being used to cope with this, rather than to address her issues head-on. Wanda will soon have to accept the fact that her actions are an unhealthy way to grapple with her internal struggles, and that will lead to nothing good.

Ultimately, Wanda being the villain of her own series is two-fold. Firstly, she is causing havoc for the surrounding people, even if she doesn't truly intend to. And second of all, Wanda is acting as her own worst enemy, preventing herself from being able to truly deal with her trauma and spiraling down a darker path as a result.

Wanda has gotten wrapped up in her own small-town world, controlling even the slightest details. It would be easy to assign Wanda the role of the villain in a blanket statement, but what appears to be occurring is a bit more nuanced. Vision and the residents of Westview know something is wrong, but are unable to help.

The remainder of the season could see Vision trying to uncover what is going on with Wanda and Westview, only to culminate with him offering his support like the good husband he is. Alternatively, Wanda may tragically have to accept Vision's death in Avengers: Infinity War, and attempt to carry out the difficult task of living on without him.

Wanda and Vision have a rocky path ahead of them in the six remaining episodes of WandaVision, so hopefully it won't come to Vision dying for a third time in the MCU for things to be resolved.