While WandaVision lacks a real “big bad,” the show has one glaring figure actively working against our main character's interests.

Acting Director of S.W.O.R.D. Tyler Hayward has made enemies with fellow agents, as well as audience members everywhere. Despite being introduced as an amicable peer, Hayward has quickly shifted his narrative to negative with his shady behavior. From keeping integral information about Vision secretive to attempting to murder Wanda without consulting his full team, the acting director has established himself as an adversary to Monica Rambeau, Jimmy Woo, Darcy Lewis, and Wanda herself.

The latest episode of this sinister sitcom further emphasized that Hayward has his own agenda, and a recent theory suggests what that agenda could be.

I know. It's crazy. But I can't stop thinking about it! Shoutout Scott Lang.

Before we dive into the parallels between Hayward and Ultron, let's look at the past precedence for what birthed this theory.

As pointed out by Twitter user @jayspatrol , the animated series Avengers Assemble 's third season saw a strong emphasis on the 'Ultron Revolution.' In that season, an official by the name of Truman Marsh serves as the Avengers' government liaison. Marsh first appears in the episode “U-Foes,” and goes on to show face in four of the following episodes.

Marsh certifies himself as a less than cooperative ally with his orders of business. He replaces Hulk with Red Hulk, issues all Inhumans be hunted down and registered, and even creates a rogue team called the Mighty Avengers to work for him after Earth's Mightiest Heroes give Marsh the pink slip. The OGs were jailed, but they were eventually freed when the Mighty Avengers understood what Marsh was up to.

Low and behold, Marsh was never who he said he was, and turned out to be Ultron in disguise.

In the Avengers Assemble show, Ultron took a human form as a government official to take out the Avengers So Hayward could be Ultron in disguise and that’s why he wanted Visions corpse pic.twitter.com/jlk0iwiB3S

While Kevin Feige has emphasized that the MCU is not interested in complete adaptations of comic or animated storylines, he clearly takes inspiration from Marvel's vast library of legacy work.

By comparison, Tyler Hayward and Truman Marsh are very similar characters. Both have ulterior motives that they keep secret from their surrounding peers. Both consider certain powerful Avengers to being dangerous threats. Both have been placed in positions of power that allow them to control the greater narrative.

When we first meet Tyler Hayward in WandaVision , he immediately relegates Monica Rambeau to handle a “missing persons case.” Once that case becomes much bigger than initially anticipated, Hayward gets his fingerprints all over it.

Once S.W.O.R.D. sets up camp around the Hex, Hayward gives the low down on the Westview anomaly situation. He explains how Wanda is the victimizer and should be treated as the threat. When his colleagues disagree with that superlative, he reveals nine-day-old footage of Maximoff breaking into a S.W.O.R.D. facility and stealing Vision's body. Monica looks especially offended that Hayward kept this information from her.

Hayward continues his shady behavior when he sends an old Stark Industries drone into Westview and authorizes an agent to pull the trigger on Wanda. Again, this comes as a surprise to Monica, who was previously operating the drone and had her controls disabled once a kill shot was available. Not only that, but she was unaware that the drone was armed to begin with.

The latest episode of WandaVision gave strong indications that Hayward's business is with Vision, not Wanda. He has a tracking device following Tony Stark's second superbot around Westview, and looks particularly fascinated by the synthezoid when he attempts to break through the Hex's wall.

WANDA AND VISION'S HISTORY WITH ULTRON

As much as fans desire an Ultron return in the MCU, Feige has made clear that Marvel Studios is not in the business of fan service. The MCU is stacked with satisfying callbacks, but they only come when they make sense.

That being said, an Ultron return actually makes sense in this instance.

Wanda's origin is directly tied to the Avengers' second big bad. After escaping Baron Von Strucker and Hydra experimentation, the Maximoff twins enlist in Ultron's army when the genocidal robot pitches them an “Avengers extinction.” Beyond that, Ultron ordered the creation of Wanda's future husband, as Vision's body was originally intended to host Ultron in his final form.

Does that make Ultron Wanda's father-in-law? Sign me up for that Thanksgiving table.

In Avengers: Age of Ultron 's last moments, Vision is the one responsible for bringing Ultron to his end by blasting away the final bot with his mind stone.

Mix a former ally with the son of this evil android, and you have both of our titular characters' origin stories intertwined with Ultron. 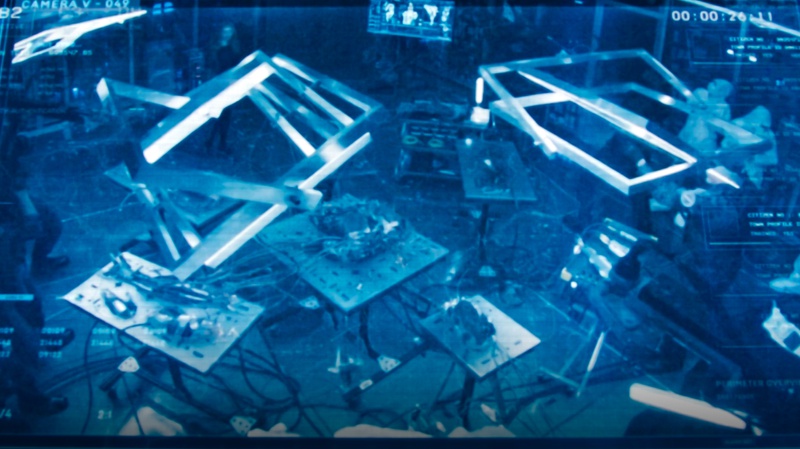 As mentioned, Hayward seems laser-focused on bringing Vision's body back to S.W.O.R.D. headquarters. As he sees it, Wanda stole his property, and he wants it back.

The security footage of Wanda stealing her late husband's body does not have her breaking into a morgue, but rather a lab. Wanda blasts the facility's doors open and collects Vision's parts from a laboratory scattered with scientists tinkering on the deceased Avenger.

Why is this organization experimenting on Vision?

Hayward noted that S.W.O.R.D.'s refocus towards weapons instead of worlds observation came as a result of the Blip, claiming that people were not coming back to work if it meant looking into outer space and poking potential threats.

But what if he's lying?

What if this new weapons focus is a personal decision in order to carry out his immoral motivations? After all, this wouldn't be the first time an MCU organization turned out to be secretly run by bad guys.

Ultron's plans ultimately fell through because he was unable to operate with his intended final form. If he is actually Ultron in human disguise, Hayward's obsession and experimentation on the Vision could come with the grand goal of possessing his Vibranium-woven body, completing the plan he never got to finish in Age of Ultron .

There's one glaring piece of history between Wanda and Ultron I failed to mention: he killed her brother.

In the fight for Sokovia, Ultron took the pilot seat on a quinjet, gunning down a defenseless Pietro Maximoff. Peppered with bullet holes, Quicksilver uttered his famous words to Hawkeye one last time: “You didn't see that coming.”

In Episode 5 of WandaVision , Wanda confronts the S.W.O.R.D. agents on the other side of the Hex. Glaring angrily, Wanda issues one final warning for them to stay out of her home. Monica approaches her former friend, asking her what she wants. After noting that she has all she wants, Wanda redirects her focus to Hayward for the second half of her sinister sentence:

“And no one will ever take it from me again.”

Hayward reacts with a confused look that quickly turns into “oh man, she got me.”

Many interpreted that line to be in reference to Hayward taking Vision from her, but in reality, Hayward is not responsible for Vision's death. What if Wanda knows Hayward's true identity, and is referencing how he once took her brother's life?

Wanda showcased just how powerful she can be in this episode. If she can freeze four thousand people at once, she is more than capable of pulling thoughts from someone's mind. If, in that moment, she discovered who Hayward actually is, many would expect an enraged reaction. In all her craziness, Wanda has actually proven to be more stable than perceived.

Sure, she kidnapped an entire town and is holding them hostage so she can play dress-up with her dead husband. We've all been there.

In all her irrational orchestrations, she actually has had very limited freak outs. Aside from excommunicating Monica from Westview and thwacking Pietro after he brought up Vision's death, Wanda has typically reacted to strange circumstances by simply rewinding and moving on.

Knowing that she has her “perfect life” inside the Hex, attacking Hayward/Ultron does her no favors. The best thing to do in that situation is to communicate her authority to Hayward. Lashing out would only prove his point that she is a threat, but subtly hinting that she knows his true motivations gives Hayward a sense of powerlessness.

Out of all the tremendous theories circulating around Marvel's first streaming series, this is one of the strangest out there. That said, this trip down speculation lane gave many reasons to keep tabs on S.W.O.R.D.'s acting director.

Do you think Hayward will turn out to be Ultron? What do you think he wants with Vision's body? Let me know in the comments below, or tweet me @LiamTCrowley.

Disney+ Makes MCU History With First-Ever Project Without a Villain