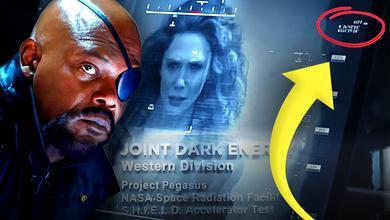 This article contains spoilers for WandaVision.

If there is one thing that fans have learned about the Marvel Cinematic Universe over the past 13 years, it's that every detail matters. These integral elements have birthed an entire sector of MCU fandom that is dedicated to scrolling through every frame of every movie, show, and trailer to find what hidden messages can give them hints into future storylines.

WandaVision has become one of the top “Did you notice?” projects in recent history. With so much mystery surrounding the show, viewers have been hyper-focused on every detail in an attempt to solve that mystery.

In the most recent episode, there is a subverted element that points to a familiar location outside Westview, New Jersey.

WHERE IN THE WORLD IS WANDAVISION?

In WandaVision Episode 5, in an effort to sneak one by Wanda, S.W.O.R.D. sends in an '80s Stark Industries drone in an attempt to reach Wanda without her noticing they are there.

While this scene is full of tension and intrigue, viewers may have missed the fact that the coordinates on the screen are far from Westview, New Jersey.

If the Mojave Desert feels familiar, that's because it is.

The Nevada side of that same desert is the Joint Dark Energy Mission Facility, a location first introduced in the opening scene of The Avengers (2012) and then again shown as the whereabouts for Project P.E.G.A.S.U.S. in Captain Marvel.

Notably, Nick Fury is present during both times that this Mojave Desert location is featured in the MCU.

WE AREN'T IN WESTVIEW ANYMORE

Considering the amount of time Marvel spent establishing the location of Westview in We Interrupt This Program, this detail is particularly noteworthy. Until Episode 4, it was unknown if Westview was actually a real place or if it was a complete figment of the imagination. While it's clear that something within that static barrier is amiss, fans learned through Monica Rambeau and Agent Jimmy Woo that Westview, New Jersey is a real place with real people, all of who seem to be missing.

In the spirit of “everything matters,” fans have reason to suspect that the city of Westview, New Jersey is not as concrete as it seems.

While there is the very real possibility that this coordinate location is a red herring, meant to send fans on the wrong path (especially since the coordinates flip when we cut back to the drone), the connection to historic MCU locations suggests there is a deeper significance.

Another intriguing aspect about the Mojave Desert is that both times the MCU has gone to that location, Nick Fury was there as a S.H.I.E.L.D. agent and the Tesseract had been the primary focus. With early rumors that WandaVision leads into the upcoming Loki series, a show blossomed by the God of Mischief's Avengers: Endgame escape with the Tesseract, these coordinates could hint at a tie-in.

With all the craziness brought in Episode 5, this is hardly the most intriguing detail. But there is something to be said about the specific location pointed out by that drone.