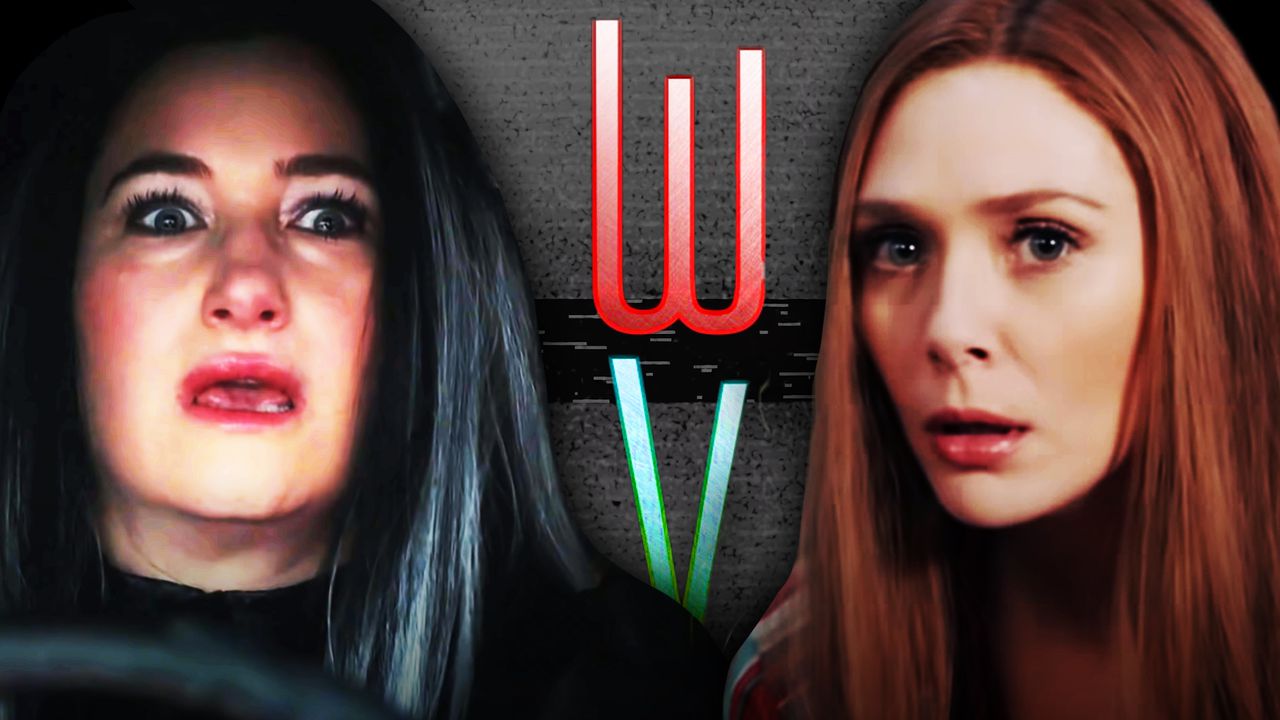 Marvel Studios is very much pushing for WandaVision to be one of the weirdest things they've ever produced. Just the other day, Kevin Feige confirmed in an interview with Empire that the last era of sitcoms that WandaVision will pay tribute to are “talk-to-the-camera, shaky-camera, documentary style" sitcoms like Modern Family and The Office. This will be to the point of directly emulating that style of filmmaking, but even before this modern era of sitcoms, WandaVision will take influence from dozens of classic sitcoms.

By far, the biggest influence will be the classic sitcom Bewitched, befitting a character named Wanda. Fans have already seen this heavy influence in the first trailer for WandaVision, as it shows Wanda using her powers on a bottle of wine, obviously being held up using string and not accomplished used CGI or more advanced special effect techniques.

More photos from Empire have leaked that haven't been officially uploaded online like others. Some of them show Kathryn Hahn's Agnes helping Wanda in the kitchen, while another shows Wanda using her powers.

Superfan @vizwandamaximof on Twitter has posted several images from the Empire issue of WandaVision.

The first image depicts Wanda and Vision, the latter still depicted in his android form, in what can be assumed to be the 60s era of sitcoms, sitting together on their couch looking lovingly at one another.

look at them looking at each other <3 pic.twitter.com/QbRgU8zo2L

The second shows Wanda getting help from Kathryn Hahn's Agnes in the kitchen in the same time period. Agnes will be Wanda's "nosy neighbor," but in all likelihood will be playing the comic book character, Agatha Harkness.

Agnes is holding an assortment of cooking supplies in bags and pots, as Wanda is helping her unload them onto the kitchen counter.

Lastly, and most excitingly, this image shows Wanda using her powers. Like the trailer, it is accomplished using special effect techniques of the era. These "floating" objects, which appear to be cooking recipes, are obviously tied to a string off-camera and made to appear weightless.

If one of those recipes is not paprikash then what’s the point pic.twitter.com/OifzCjbJPC

The last image is extremely exciting as it shows that Marvel Studios is really pushing it with their authenticity to the era that they're emulating. The studio is going so far as to use such primitive and obviously fake-looking techniques to achieve such effects during that time. It would be cool to see other simpler effects used during this era, like match-cuts, reversing footage, perspective shots, and more.

The photo with Wanda and Agnes is interesting too, since it appears that Agnes is the one bringing over all the supplies for what appears to be preparations for a dinner party or other such gathering. Agnes may be the one that is pushing Wanda and Vision to have this gathering.

After all, she does say in the trailer that something "is gonna be a gas," which is her likely talking about this dinner party, as she's wearing the same dress as in this photo. It will be interesting to see how much Kathryn Hahn's Agnes pushes herself on the Vision family and whether she's attempting to help or hinder them.

It isn't just there to add accuracy to the depiction of that era's sitcoms, but as director Matt Shakman said, "You need it to have that weird sense of fakeness."