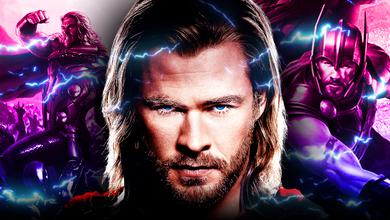 While fans are on the verge of Tom Hiddleston's Loki series on Disney+, the God of Mischief isn't the only son of Odin with another story to tell.

Thor: Love and Thunder starring Chris Hemsworth will be the God of Thunder's fourth film with a stacked cast that includes the Guardians of the Galaxy, Tessa Thompson's Valkyrie, Christian Bale's Gorr the God Butcher, and Taika Waititi's Korg.

But Waititi isn't only reprising his role as Thor's surprisingly articulate companion. He's also back behind the camera following the success of 2017's Thor: Ragnakrok.

In an interview with The Sydney Morning Herald, Waititi touched on his future with the Thor films beyond Love and Thunder, saying, "Who knows if we do another one..."

“Who knows if we do another one after this, but I definitely feel like we put everything — every idea and every single ridiculous concept or gag or stunt or character — into this film. I couldn’t be happier with it.”

As opposed to the first two Thor films, Waititi's Thor: Ragnarok was a drastic departure from the franchise in terms of style and tone.

But fans responded positively to his signature brand of unbridled humor, and it also complimented both Hemsworth and Hiddleston's comedic talents as well.

The director has been open about how this upcoming Thor film will up the ante in regard to its craziness, and his response in this interview about how "every single ridiculous concept" went into this film certainly confirms it.

IS LOVE AND THUNDER WAITITI'S FAREWELL TO THE MCU?

In recent years, Waititi has truly made a name for himself and has a number of projects on his slate including a Star Wars film.

If he feels he put everything into Thor: Love and Thunder, this very well could be his last turn in the director's chair for a Thor film, especially if Thor's story is also approaching its conclusion.

To date, MCU's Phase 4 has focused on elevating side characters into leading roles, as evidenced by WandaVision and The Falcon and the Winter Soldier, and introducing new faces like Shang-Chi and the Eternals.

Considering Hemsworth has been in the MCU since 2011, it's possible Thor: Love and Thunder could serve as a closing chapter for both the God of Thunder and his director.

But then again, just like Waititi said, who knows?