The Suicide Squad panel at DC FanDome brought with it a mountain of new information, unveiling the film's cast of characters and a brand new behind-the-scenes featurette with new interviews and footage. Particular attention was given to the background of Bloodsport, who has been revealed to have a daughter named Tyla played by Storm Reid. He will also be imprisoned in the film for attempting to shoot Superman.

The director has even unveiled new details and tidbits following the panel’s release. This includes the film’s first official poster , depicting the Squad running from an exploding helicopter in all its saturated, vibrant glory. Gunn also made mention of other characters in the film, including the fact that Steve Agee will have a dual role by also playing John Economos.

James Gunn has now taken to social media to unveil more from the film, including new promotional material for DC FanDome...

In a recent tweet , James Gunn has just revealed a new, alternate poster for The Suicide Squad . The poster compiles the character icons, unveiled during the roll call teaser from DC FanDome, into one colorful piece of artwork. 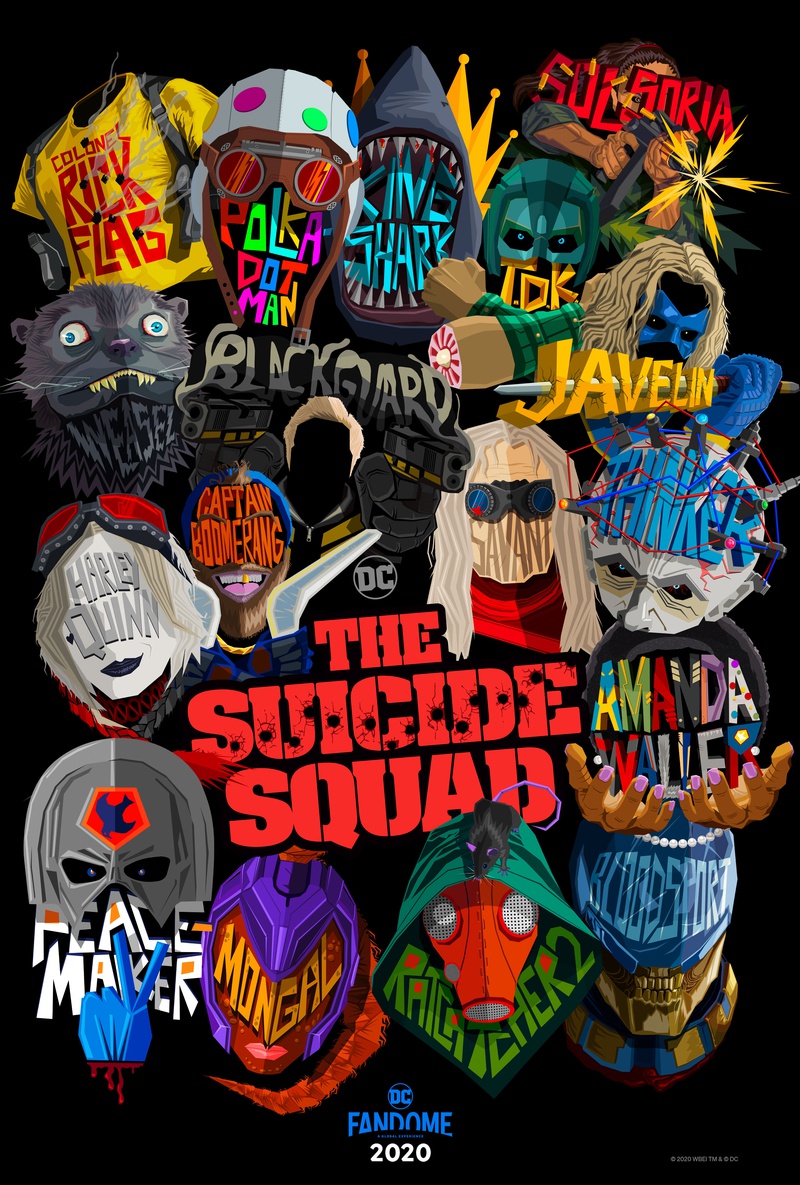 A stylized, graphic look is used throughout the poster, emphasizing the characteristics of each character through their individualized fonts and character icons. Most characters simply have their faces or helmets represented, such as Harley Quinn, Weasel, Bloodsport and Mongal.

Others have a bit more to reflect their character traits. Sol Soria is the only character to have more of her upper body shown, firing a machine gun behind some jungle to indicate her militaristic background. Peacemaker also has a dismembered hand making a peace sign. Amanda Waller has one of the more unique fonts, taking inspiration from different members of the Suicide Squad for each letter to reflect her leadership status.

The Thinker has the nodes on his heads connected, possibly indicating how his power manifests. His face is notably paler than how Peter Capaldi appears in promotional footage. Either this is a stylistic choice for the poster, or The Thinker will experience a physical transformation while using his powers.

TDK is sporting a pose akin to that of Wonder Woman, but notably has flesh exposed from the elbow down. This points to the fact that Nathan Fillion is indeed playing a version of the ridiculously obscure character Arm Fall Off Boy, only under a different name.

Ultimately, this is a fantastic-looking poster and should get fans excited for when The Suicide Squad releases in theaters on August 6, 2021.