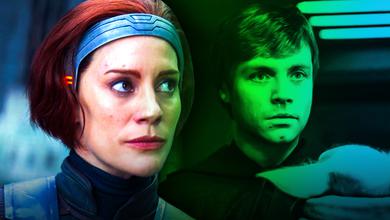 The Mandalorian's sophomore season was full of shocks and surprises, specifically in the form of one Luke Skywalker.

While just about everyone and their grandmother now know about the iconic Jedi's appearance in the Disney+ show, the reveal was kept secret for nearly an entire calendar year. It now appears that not just fans were kept in the dark, but also some actors that were directly involved in the big finale.

Not only does CGI produce some stunning visuals, but it's apparently great at keeping secrets too.

Speaking on the Schmoedown Entertainment Network's Sith Council, Bo Katan actress Katee Sackhoff revealed she didn't know the identity of the Jedi that would appear in The Mandalorian season finale until the episode aired on Disney+.

“I didn't know until I saw it with you guys. I didn't know! They didn't tell us [who it was]. There was an actor there with dots on his face. I mean, [I] kind of [put it together], but at the same time I thought to myself, 'They would've let us know that.'”

Sackhoff continued that they were even told the Jedi's identity was someone other than Luke, but couldn't recall specifically which fake name they were given.

“They said, who did they say it was? I think Robin (Chow) knew who they said it was. But it was a complete red herring. So we didn't know. I knew it was a Jedi. I knew it was an X-Wing. So you start to put things together, but you don't know.”

We all know the great lengths Star Wars goes to protect big reveals, but this is something else.

Way back in 1980 when Empire Strikes Back hit theaters, the massive “No, I am your father” twist came as a shock to not just fans but cast members too. Mark Hamill has spoken about how the original line was recorded as “Obi-Wan killed your father” and was changed in post-production to keep the twist secret. Even Harrison Ford, arguably the biggest name in that flick at the time, was unaware of the Darth Vader lineage.

That being said, Ford's Han Solo wasn't present during the now iconic Cloud City confrontation between Vader and Luke. Sackhoff's Bo Katan was quite literally in the same room as Luke Skywalker during The Mandalorian's Chapter 16, yet she was unaware of whom the body-double would end up being. The magic of CGI, folks.

What's really special here is realizing just how much these filmmakers care about their projects. Keeping Luke's reveal hush hush from cast members is just another way of showing that Jon Favreau and Dave Filoni have a real passion for the full fan experience and that they have no issue keeping tight lips to protect it.

As we know, news leaked of Temuera Morrison and Rosario Dawson's castings as Boba Fett and Ahsoka Tano respectively, months before The Mandalorian's second run would premiere. If Favreau went with the recasting route, the news would've likely made its way to the internet long before he intended it to be public knowledge. The CGI'd body-double allowed for the reveal to be kept quiet until it was meant to be experienced, the way Favreau intended it to be.

Sackhoff is expected to return for The Mandalorian's third season, which is set to premiere around Christmas time later this year.