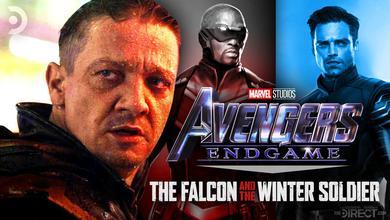 In the aftermath of Avengers: Infinity War, Thanos had succeeded in his grand plan and wiped out half of all life in the universe. This included many of our heroes, including their loved ones like Clint Barton a.k.a. Hawkeye's whole family. In order to cope with this loss and sense of injustice, Hawkeye decided to don a new identity, Ronin.

For the next five years, he would massacre terrorist groups, cartels, and criminal empires, including his last rampage against the Yakuza, a Japanese gang.

It was reported several months ago that Disney+ series The Falcon and the Winter Soldier was casting for various gangs and criminal organizations, including the Yakuza, and more recently, set photos of bikers with the Ogun symbol on their jackets were released. However, there is even more confirmation now that the Yakuza connection could be brought back in The Falcon and the Winter Soldier.

It was pointed out by Reddit user /u/littlvinny on /r/MarvelStudiosSpoilers that The Falcon and the Winter Solider has added two stunt persons on its IMDB page that points to more Yakuza involvement in the series.

While IMDB isn't completely reliable since it can be edited by anyone, it is trustworthy when it comes to roles and positions like this that aren't primary or supporting actors.

The fact that Leon Ngo is labeled as "yakuza bike rider" seems to point to them possibly being affiliated with the gang donning the Ogun symbol seen in previous set photos. Interestingly enough, the Ogun from Marvel Comics is actually linked to Wolverine.

However, just because there will be a stunt performed on a bike doesn't mean that Sam and Bucky will be fighting with this gang or that there will be a bike chase with them.

Simply riding a motorcycle down a street is considered a stunt, so it is still unknown how much they will actually factor into the story or episode. But, from Charles Murphy's earlier report about the shooting location and casting, it seems likely this could all be going down in the third episode of the series.