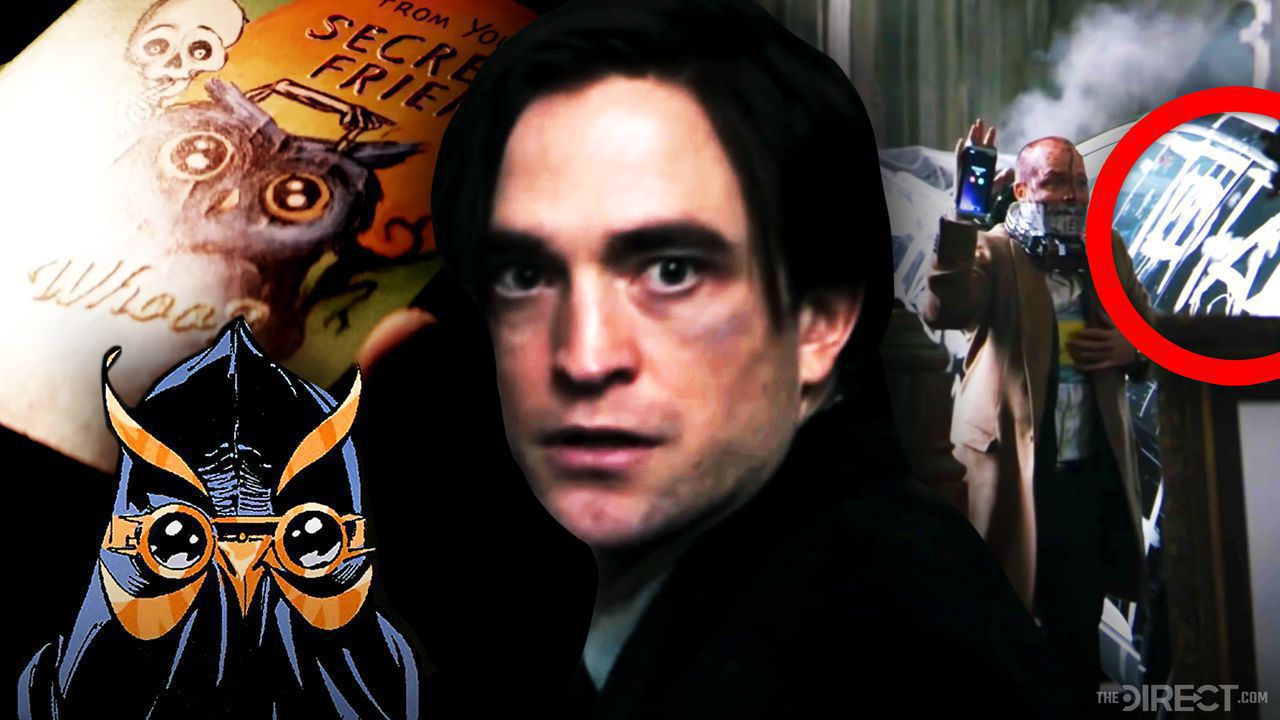 The Batman took the main event slot of DC FanDome, and man did it live up to the hype.

Leading into the panel, Warner Bros. dropped the first official still images from the film, while also teasing big Batman-related surprises at the event. Director Matt Reeves spoke at length about the film's themes, while also teasing some major plot points.

The big surprise turned out to be the first footage from the film in the form of a two-minute teaser trailer. Reeves confirmed the footage was only from "the first 25-30 percent" of the film, but it was enough to make The Batman the talk of DC FanDome.

While Pattinson's Bruce Wayne and locations like the Batcave were spotlighted, some subtle nods went undetected. Without further adieu, here are seven things you missed from The Batman trailer.

In our first moments of the trailer, we see a mysterious figure duct-taping the face of a victim. As Jeffrey Wright's Jim Gordon leads Gotham City Police Department into the crime scene, he recovers a mysterious envelope addressed "to the Batman."

Knowing Pattinson's Batman is only in his sophomore season as the caped crusader, it's possible that his relationship with the GCPD is still in its infancy. We know Gordon and Batman will eventually work side-by-side; however, this clue could indicate the first time the dark knight is welcomed to a crime scene.

Batman's body language further leads towards this possibility. He enters the crime scene very hesitantly, looking like he does not want to step on the toes of those he one day hopes to work cohesively with. Later in the trailer, Batman gets physical with some of GCPD, to the point of needing to be restrained. While he'll walk on egg shells to start, it is only inevitable that the Batman loses his cool with Gotham's law enforcement eventually.

Also interesting is the penmanship. The ink clearly fades in the final letters on the envelope, indicating whoever is responsible for the cryptic clue is a bit amateur. Reeves did note that Paul Dano's Edward Nygma would just be starting out as the Riddler when The Batman begins, which could indicate the elementary handwriting belongs to none other than Nygma himself.

Sticking with the envelope, inside the Batman-addressed paper casing is a card with a mysterious message.

The left flap of the card omits some words, but fans have gathered that it likely asks "what does a liar do when he's dead?" What follows are an array of mysterious symbols, which have already been decoded by a fan.

Twitter user @TheMasterD101 concluded that the symbols translates to "he lies still," which adds up with both the symbol repetition as well as the prompted question.

Again, the penmanship here is noteworthy. The left flap's question has faded ink, indicating the scriber wrote quickly and without a lot of pressure. However, the symbols, the focus of the card, look like they were drawn with strong attention to detail. If there's any villain from Batman's rogues gallery that cares most about his enigmatic traces, it's the Riddler.

Nods to Maroni and Falcone

The driving force behind the Gotham City corruption is the mob.

At the peak are the clashing Maroni and Falcone families, led by Sal Maroni and Don Carmine Falcone, respectively. Director Matt Reeves already confirmed both mob bosses would play a role in The Batman, and this trailer mirrored how they could potentially both be pulling the strings from the shadows.

At the crime scene, newspapers can be seen in the background with nods to both mob bosses.

The first comes in the shot of the painted word "LIES" on a collection of newspapers, with multiple headlines reading "DON'S DONE IT AGAIN" as well as "KING DON!" This could tie to Mayor Don Mitchell Jr., but it could also be Don Carmine Falcone. Falcone has gone by Don in some comic iterations, and his role pits him as the leader of the 'Roman Empire'  of organized crime in Gotham. While a criminal underground, he is a known public friend of the Wayne family.

The second newspaper headline exists framed on the wall, and reads "MARONI DRUG BUST!" The negative nature of this headline indicates Sal Maroni's mob does not have the press favor, perhaps hinting that Falcone controls the newspapers and takes any opportunity to pan his enemies.

At FanDome, Reeves said The Batman would tackle the corruption within Gotham, and what more apparent manipulation than with a wealthy family controlling the media?

The Court of Owls

I could write an entire college thesis on this little card.

In a blink-and-you'll-miss-it moment, the cover of the cryptic card reads "From your secret friend... Who?" Most noteworthy is the cover's imagery: an owl.

This Easter egg is a nod to the popular Court of Owls, a secret society of Gotham elites that control the narrative behind the scenes. Perhaps most interesting is the resemblance between the cartoon owl on the card in the trailer and the head member of the Court of Owls from the comics (as pictured above). The similar color and design of the two has to be more than coincidence.

The Court of Owls is being adapted for 2021's Gotham Knights videogame, so it is unlikely we will see the villainous group in The Batman.

But what if they are involved? The card may just be a nice nod to a famous Batman tale, but it could actually lay the groundwork for a major twist. The Riddler may be the one depositing these clues, but what if he has a secret employer? If there is anyone that wants to expose the machine so they can take back the reigns of control, it would be the Court of Owls.

Later in the trailer, we see many gathered to attend what is likely the funeral for the first duct-taped victim. During this gathering, a runaway car plastered with the message "DEAD ON ARRIVAL" crashes through the building.

The driver who exits the vehicle matches the face of the picture of the funeral's subject: Mayor Don Mitchell Jr.

While Anchorman's Brick Tamland beat him to being the first to show up to his own funeral, Mitchell's arrival raises many questions. Why does the public think he's dead? Who sent him in the runaway car? Does the sender know Batman is attending the funeral?

Mitchell's minutes look to be numbered, as his panicked face along with the 'dead on arrival' message likely means he serves as a martyr for his sender's message.

Also noteworthy is how all the funeral attendees flee except Bruce Wayne. Similar to how Ben Affleck's Bruce ran straight into the rubble in Batman v Superman, Pattinson's rendition encompasses the same fearlessness his predecessors brought to the role.

Later in the trailer, we see a suited up Batman tackling an unidentified figure away from an explosion at the funeral. This likely means whatever contraption the runaway car sender set up will indeed go off, but it may not cost Mayor Mitchell his life. Batman's presence at the funeral explosion also raises the question of how he was able to suit up that fast. Unless he got his hands of some Tony Stark nano-tech, Wayne's quick transformation remains a mystery.

Talk about hiding in plain sight! Director Matt Reeves told us that actor Colin Farrell would be near unrecognizable as Oswald Cobblepot, but I don't think anyone was expecting this.

In a brief moment, Farrell's Penguin takes frame. Reeves indicated that we would see the Penguin before his rise to power, and based on his disheveled look, that appears to bode true.

The shot before our quick glimpse at the Penguin showed Zoe Kravitz's Catwoman lining up a sniper shot. While this may just be an editing trick, Selina Kyle targeting Cobblepot could be a subplot of this movie. We later see Batman confronting Catwoman in a physical encounter, perhaps because she's carrying out justice in a way he doesn't condone.

Batman fans know the caped crusader's no killing policy, and his interruption on Catwoman's assassination attempt may be his way of enforcing just that.

"If you are justice, please do not lie. What is the price for your blind eye?"

The final narration of the trailer comes in the form of a rhyming riddle. While Edward Nygma's main antagonist status may be obvious at this point, it is still important to analyze every clue dropped about it. After all, isn't that what the Riddler would want?

This final riddle points to Batman as the subject, as the singular "eye" likely means one man rather than the entire GCPD. Reeves teased that the corruption would be confronted by others than just Batman, and if the Riddler sees the caped crusader riding with Gordon, he may associate Gotham's vigilante with those running the machine. 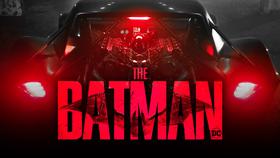 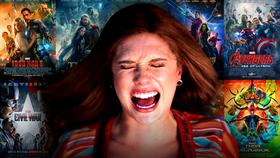