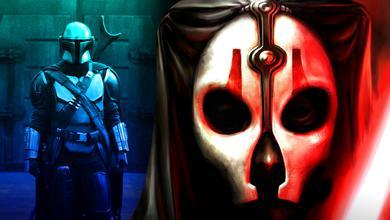 The Mandalorian has proven that it's not afraid to draw from old Star Wars gaming material. A few weeks back, it was revealed that Moff Gideon was in the process of creating deadly Dark Trooper soldiers, who originally debuted in Star Wars: Jedi Knight.

Another popular video game franchise, Knights of the Old Republic, has been well represented in the hit series as well. The culmination of Mando's epic in the sands of Tatooine during Season 2's premiere provided the Tusken Raiders with a fine reward: a Krayt dragon pearl. While this prize was a smaller Easter Egg, KOTOR was once again represented in the latest episode by way of a familiar threat...

In The Mandalorian "Chapter 13 - The Jedi," several HK-87 droids appeared to battle Din Djarin and Ahsoka Tano. These droids, previously introduced in Star Wars: Knights of the Old Republic, served as guards for the local magistrate.

On the side of the droids' heads is the emblem of the Seventh Fleet, which belonged to Grand Admiral Thrawn.

The HK-series droids were quite the threat in Knights of the Old Republic, a line that continued in the new canon and evolved into the HK-87s seen in The Mandalorian. Droids are a reliable guard force for those unwilling to rely on loyalty to maintain their rule, and the HK droids are agile and strong enough to impose the magistrate's will - until they meet their match in Ahsoka and Mando.

What makes these droids fascinating is the Seventh Fleet logo imprinted on the side of their heads. The Seventh Fleet was under the command of Grand Admiral Thrawn during his time while serving the Empire, but much of it was decimated by the Purgil at Lothal. It seems unlikely that the fleet would be making a return, unless Thrawn does prove to be an Imperial warlord, though the vile magistrate serving under the admiral complicates the situation.

More likely is the possibility that the HK droids were manufactured by the Chiss Ascendancy and provided to the magistrate by Thrawn to serve her unknown purpose. If Thrawn is indeed back to serving the Ascendancy, could we one day see his HK-87 droids face down Moff Gideon's Dark Troopers? Star Wars has had a whole host of dangerous warrior droid battkes, but a showdown between these two forces would be a first.