Star Wars: The Knights of the Old Republic Object Makes Appearance in The Mandalorian Season 2 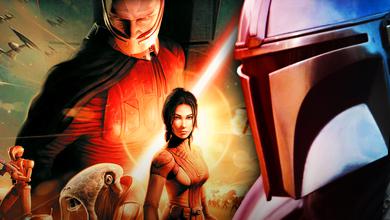 The Mandalorian opened Season 2 with a stockpile of surprises and Easter eggs to tide fans over after a long wait. There has been a substantial amount of teases and rumors about The Mandalorian Season 2 on social media in the past months, leading to various speculation among fans on how the narrative will move forward.

This was further amplified by the rumors that several iconic characters from the Star Wars franchise could soon arrive in the show, adding more hype to the already-anticipated second season. The premiere episode gave fans a surprise character debut in the form of Timothy Olyphant's Cobb Vanth while also teasing the return of Boba Fett, one of the fan-favorite characters from the original trilogy.

A Star Wars show isn't complete without its own set of references to the larger saga. It was pointed out that Vanth's speeder closely resembles Anakin Skywalker's podracer from The Phantom Menace while a creature from Star Wars: The Clone Wars made its live-action debut in the show. Now, another interesting callback has been unearthed from Season 2's premiere episode.

The Mandalorian Season 2 premiere featured a familiar object from BioWare's Star Wars: The Knights of The Old Republic video game in the form of the Krayt Dragon's pearl. The object can be seen at the tail-end of the episode after Mando, Cobb Vanth, and their allies have defeated the Krayt Dragon.

To recap, the pearls are colored stones that can be found in chambers of the gizzard of Krayt dragons. These magnificent objects hold significance to the Tusken Raiders, since obtaining them essentially means a sign of bravery. Meanwhile, for the general public, selling off these pearls will no doubt give them a significant amount of fortune since these objects are worth a hundred thousand credits each.

It's a given that The Mandalorian is a must-see affair for any Star Wars fan, and part of the fun in doing so is the callbacks and references that diehards will find upon watching.  The presence of a Krayt Dragon's pearl could hold no weight for casual fans upon seeing the object, but it's clear that the inclusion of this mighty object will be appreciated by longtime fans of the galaxy far, far away.

Aside from being featured in Star Wars: The Knights of the Republic video game, another famous appearance of the Krayt Dragon's pearl is heavily tied to Han Solo. It was revealed that the iconic smuggler used the pearl to pay his way into the famous Sabacc game in order to win the Millennium Falcon from Lando Calrissian. In a way, this is one example of the interconnected nature of the Star Wars universe, integrating objects and characters into the larger narrative in surprising ways.

At this point, there's a good chance that more callbacks will be made by The Mandalorian as the new season progresses, and this development definitely bodes well for many fans.