Every Jedi Who Appears In Star Wars: The Bad Batch Premiere 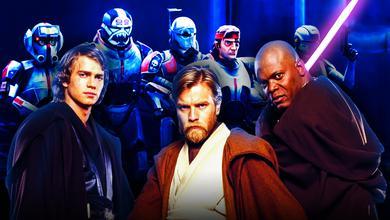 Warning - This article contains spoilers for the premiere of Star Wars: The Bad Batch.

Star Wars: The Bad Batch, Lucasfilm's latest animated series and the sequel to Star Wars: The Clone Wars, appropriately debuted on May the 4th 2021, otherwise known as Star Wars Day.

The series focuses on Clone Force 99, a group of experimental clones who each possess their own unique skill, as they struggle to find their way in the galaxy following Order 66 and the rise of the Empire.

Even though The Bad Batch is a spin-off of The Clone Wars, it can't involve the Jedi to the same extent as its predecessor due to the events of Order 66.

But in Lucasfilm's effort to present multiple perspectives of this pivotal event, several Jedi were included in The Bad Batch's premiere episode titled "Aftermath."

THE LAST STAND OF THE JEDI

One of the main characters from The Clone Wars, Obi-Wan was seen in two separate fights during the episode's newsreel.

He first appeared alongside Anakin Skywalker as they attempted to rescue Chancellor Palpatine, the same event that serves as the opener for The Revenge of the Sith.

He's then shown again fighting battle droids along with Mace Windu in what appears to be a scene from Episode 4 of The Clone Wars final season.

Fans know that Obi-Wan is one of the few Jedi to survive the events of Order 66. His time on Tatooine following Order 66 looks to be the focus of the upcoming Obi-Wan Kenobi Disney+ series.

Anakin is only shown for a moment destroying battle droids on either side of Chancellor Palpatine during his and Kenobi's rescue attempt.

However, it's difficult to deny his presence, especially when the clones turn on the Jedi as fans know the Chosen One is doing the same on Coruscant.

Much like Anakin, Mace Windu only makes a brief appearance fighting battle droids alongside Obi-Wan.

But again, it's hard not to think of him when Emperor Palpatine delivers his address and refers to the attack on his life later on in the episode.

In the actual episode itself, three Jedi are included in "Aftermath." Unfortunately, only one actually survives Order 66.

Known for having been trained by Mace Windu and a member of the Jedi High Council, Jedi Master Billaba has been represented in both live-action and animation.

She was prominently featured at the start of "Aftermath" on the planet Kaller before her clones turned on her due to Order 66. She held them off in order for her apprentice Caleb Dume to escape.

Better known as Kanan Jarrus in Star Wars Rebels, Caleb Dume brings Clone Force 99 to his master's aid on Kaller. He enjoys their presence, and they seem to enjoy his as well.

However, Order 66 changes everything for Caleb.

After watching his master sacrifice herself for him to escape, he runs from Hunter thinking he too is affected by the clone's inhibitor chip.

But despite Hunter's best attempts to get the Padawan to trust him, Crosshair's determination to "follow orders" convinces Caleb that his newfound friends want him dead.

He's last seen leaping over a chasm and disappearing into the woods of Kaller. Although, fans know he will assume the name Kanan Jarrus and join Hera Syndulla against the Empire in the future.

Upon Clone Force 99 returning to Kamino, they learn that the war is in fact over as clones walk past carrying the body of a murdered Jedi.

While the Jedi is covered and their identity unknown, their hand releases a lightsaber hilt that drops on the ground where they stand, further driving home the tragedy wrought by Order 66.

IS THIS THE LAST TIME JEDI APPEAR IN THE BAD BATCH?

Fans recently learned from the show's director and executive producer Brad Rau that The Bad Batch's first season will consist of 16 episodes.

And considering Order 66 occurred within the first few minutes of its premiere episode, the Jedi are (mostly) gone during the time when this series takes place. This means The Bad Batch is solely about the clones and their journey, not the experiences and relationships between the Jedi and the clones as seen in The Clone Wars.

Still, this doesn't mean audiences won't see the likes of Obi-Wan at some point in the series.

It's also likely that Ahsoka Tano, although she doesn't claim to be a Jedi, may make an appearance, particularly due to her relationship with Captain Rex.

But if this is in fact the last time Jedi appear in The Bad Batch, it will be interesting to see how Dave Filoni and the show's writers find a way to integrate the Force throughout the season's run.