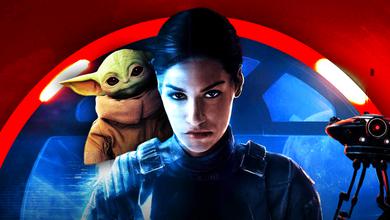 Star Wars has become known for its cavalcade of celebrity cameos that often fly under the tractor beam, especially in the Disney era.

The most recent film, The Rise of Skywalker, saw a number of appearances from actors and acclaimed crew members. Thor: Ragnarok's Karl Urban managed to earn himself a role as a First Order Stormtrooper, with the actor even having a spoken line in the film. Composer Michael Giacchino also had a cameo in Episode IX, gearing up in full crimson as a Sith Trooper.

The Mandalorian is notorious for this practice as well, featuring various Star Wars directors in its first season, only for Star Wars: Rebels creator Dave Filoni to return in the second. Even Luke Skywalker himself has made his way into the Disney+ series, with Mark Hamill voicing a droid bartender.

Now, another actress has made a cameo in the hit Star Wars series, who also hails from the galaxy far, far away...

In an interview with IGN, Star Wars: Battlefront II's Janina Gavankar, who plays Iden Versio in the game, has discussed her secret cameo 'appearance' in "Chapter 11 - The Heiress."

Gavankar has worked with special effects artist Frank Ippolito many times in the past, who made and puppeteered one of the Mon Calamari headpieces in the episode. Due to their history, Ippolito asked the Battlefront II actress if she was willing to help him puppeteer a specific part of the headpiece, as Gavankar explains:

Janina Gavankar's visit on set did not go unnoticed however, with executive producer Dave Filoni questioning why she was on set. After telling him that she was helping with the puppeteering, Filoni's response was "one of those 'of course you are,' kind of things."

Janina Gavankar is best known as the voice and motion capture for Star Wars: Battlefront II's Iden Versio, but now she can add another Star Wars 'portrayal' to her list in the form of a Mon Calamari mechanic. To have a role in the Star Wars universe is one thing, but to have two is even more impressive.

During the time period of The Mandalorian itself, Iden Versio is still around with Inferno Squad. Perhaps Gavankar's appearance on set could convince Dave Filoni or other Star Wars creatives to bring the character back into the fold in later seasons. Iden Versio's journey came to an end following the destruction of Starkiller Base, but her time before then is fair game for her to make a reappearance.

The latest episode of The Mandalorian, "Chapter 11 - The Heiress," is streaming now on Disney+.