Spider-Man: No Way Home is fast approaching its premiere, meaning fans will finally be able to uncover the Multiversal mystery that the threequel is withholding. Bringing back classic villains like the Green Goblin and the Lizard and some old allies in the form of Doctor Strange, No Way Home is quite possibly Tom Holland's most bombastic solo outing yet.

Thus far, the returning foes from past Spider-Man franchises have been heavily used for promotion in the run-up to release, but this wasn't always the film's marketing plan. Though the film has still been marred with rumors and leaks, Marvel Studios and Sony Pictures have tried their hardest to limit potential spoilers from getting out.

One strategy that is employed by Marvel is to digitally remove characters from marketing materials, which some claim is the case for a certain piece of footage featuring the Lizard.

Now, the cast of the Spider-Man threequel has given their explanations on why the Lizard would make such a sudden head turn.

In an interview on Jimmy Kimmel Live!, the cast of Spider-Man: No Way Home sat down ahead of the film's release to answer a few questions.

One topic that arose was the suspicious footage of the Lizard in a Brazilian promo where it appears that he is being punched by nothing, leading many to believe a certain Spider-Man has been digitally removed from the shot. 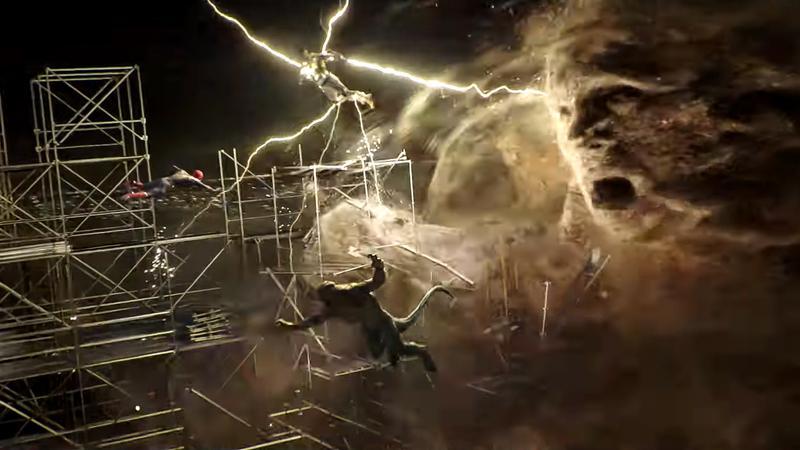 Other members of the cast, however, tried their best to come up with an excuse, with leading star Tom Holland suggesting that "it's a bird" hitting the Lizard in his reptilian maw.

While MJ actress Zendaya stated that it was debris from the statue hitting the villain, Doctor Strange actor Benedict Cumberbatch provided another humorous, odor-related suggestion:

After being pushed for a proper answer, Holland and Cumberbatch both blamed the head turn on a "seagull," whereas Batalon concurred with Zendaya's conclusion:

"There's definitely some debris from the statue, Jimmy. You're reading too into it."

Kimmel suggested that perhaps this was Marvel Studios' way of introducing the Fantastic Four, proposing that Sue Storm's Invisible Woman was the culprit. The rest of the cast had little to say, but Cumberbatch quickly followed up with another joking answer while doubling down on the debris claim, stating it was the hero "Scaffold, the Incredible Pole" that thwacked Lizard in the face.

Did Tobey and Andrew Get Edited Out of Spider-Man Trailer?

With the release of the film so soon, the No Way Home cast would be remiss to reveal the true cause of the Lizard's neck pain just yet. The actors provided plenty of humorous responses, but no concrete answers. Well, one concrete answer.

The most plausible of explanations was the claim of debris hitting the Lizard in the face, which could have fallen off of the statue or the surrounding scaffolding. Perhaps the Lizard is getting socked in the face with a piece of concrete, and just proved to be a tad unlucky here.

What is the most likely scenario, is that Tobey Maguire and Andrew Garfield were indeed edited out of the second trailer. Sony just forgot to also edit Lizard's reaction to a punch that he is likely receiving from Andrew Garfield's Spider-Man.

The movement of Curt Connor's crocodile-like cranium is still incredibly suspect though, really seeming like another web-slinger like Tobey Maguire or Andrew Garfield is behind the assault. Marvel and Sony are still remaining coy on the topic, though official art may have potentially confirmed Maguire's Spidey fighting alongside Holland's.

But who knows? Perhaps Scaffold, the Incredible Pole will in fact be the culprit and the next hero to receive a Phase 5 project.