Spider-Man: No Way Home is just 10 days away, and fans could not be more excited! After months of speculation, leaks, rumors, etc, all will finally be answered soon when people have a chance to see Spider-Man: No Way Home on December 16th! Speaking of leaks, a now-infamous alleged leak of Tobey Maguire and Andrew Garfield surfaced on the internet a little over a month ago. Sony, surprisingly, has responded to said leak.

Will Tom Holland's Spider-Man prove his innocence against Mysterio framing his for murder? How are all of these villains from past Spider-Man movie franchises like Alfred Molina's Doc Ock and Willem Dafoe's Green Goblin making their way into the MCU? Does the presence of these villains indicate that Tobey Maguire and Andrew Garfield will also make an appearance in the film?

There are truly an endless amount of questions surrounding No Way Home. Because of this, some are trying to answer these questions before Spider-Man 3's release date on December 17.

Various plot details and images are constantly circulating online, lurking in the depths of Twitter and Instagram to spoil the movie for the fans who have waited so long to see this epic conclusion to Tom Holland's MCU trilogy.

Now, even the biggest names in the industry are sharing spoiler details, even if they claim they don't know it. YouTuber John Campea is the latest culprit of this after having shared a couple images from No Way Home that he says he thought were fake, but might end up being very real. 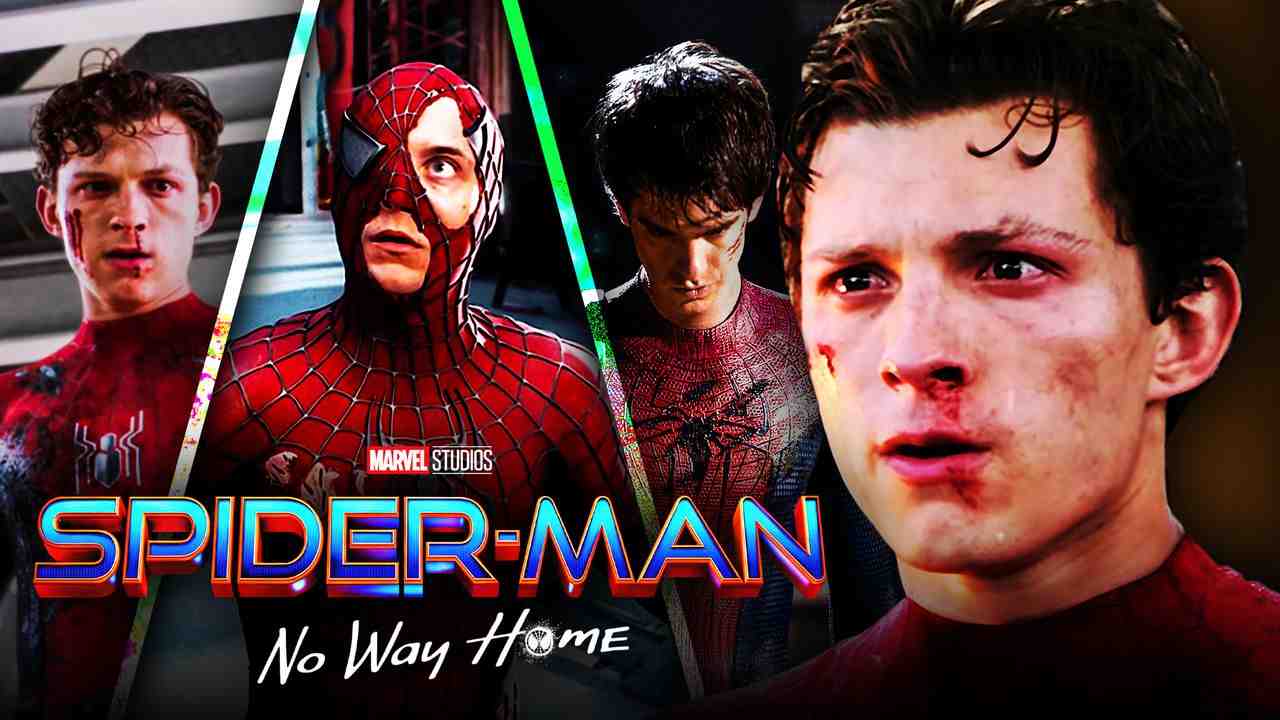 Warning: This article discusses the leak of potential spoilers for Spider-Man: No Way Home

On November 8, YouTuber and film critic John Campea tweeted a pair of bombshells that showed two highly-spoilery images from No Way Home.

The photos appeared to feature Tom Holland, Tobey Maguire, and Andrew Garfield all suited up in their respective Spidey suits. The other photo showed Holland's Peter Parker with Marisa Tomei's Aunt May, Jon Favreau's Happy Hogan, and Charlie Cox's Matt Murdock aka Daredevil.

Campea explained in a recent livestream that, shortly after sharing the images on Twitter, he was contacted by a Sony representative who asked him to reveal how these images came into Campea's possession - a detail he still refuses to disclose, claiming he simply "can't" tell anyone who sent the pictures to him.

While he acknowledged that it was "unethical" to share what he now believes to be genuine leaks, Campea claims this does not justify him also acting without ethics by outing the individual that put him in this situation.

Campea claimed that after he tweeted the images, he got a call "five minutes later" telling him that "these pictures are probably real," which is what prompted him to "immediately jump back on Twitter" to "delete them immediately:"

"I post it, and then five minutes later, I get this call from somebody - I wont say who - saying that, 'Yeah, uh... these pictures are probably real.' I'm like 'are you sure?' And, like... 'Uh, look, I don't know 100% for sure, but I feel pretty comfortable saying that these are most likely real. And I'm like, 'well, shit.'" So I immediately jump back on Twitter, again only about five minutes had passed, and I delete them immediately."

Campea then went on to add that "there were more pictures" than just the two images that he tweeted, citing a total of "four" leaked shots from No Way Home that hit his inbox. He also hinted that the two unshared photos are "the more juicy ones:"

Claiming that he gets pictures of this nature sent to him "all the time" and "they're never real," Campea says he was certain the leaked images were fake when he shared them via Twitter.

John Campea has held fast to his claim that he believed these images were fake until told otherwise from the "studio that has the letter 'S' in it;" however, he wasted no time admitting that he was the one to put the John Campea Show's watermark on the images that he shared:

"I was talking to one of the studio reps today, I'll say studio that has the letter 'S' in it, and they basically said to me, like, 'I assume you thought these things were fake because you put your watermark on it. I don't expect that you would try to steal the Mona Lisa and then leave your business card behind for the cops to call you.' And I'm like, 'yes! If I had thought they were real, and I was going to share them online, I would absolutely not put my watermark on it, so everybody knew the leak came from me.'"

Campea then went on to add that, while he doesn't "mind spoilers" because "they don't affect (him) too much," he acknowledges the larger fan base that prefers to see the content when it's meant to be seen and not beforehand. The YouTuber went on to add that he "hates leaks" and is even quoted recently brainstorming on how to prevent them in the future following Eternals debut:

"Now, something you should know about me. I hate, hate leaks. I don't mind spoilers, myself, for me, but I know that there are a lot of people that are very sensitive to spoilers, and I hate spreading spoilers. As a matter of fact, I put on Twitter ... when everybody was spoiling the end of Eternals, I got on Twitter and said 'I think if you get invited to an advanced screening of something, you should just sign a non-disclosure agreement with a minimum million-dollar fine, that if you sign that non-disclosure agreement, you should get fined a million bucks if you then come out of that movie having signed a non-disclosure and then tell everybody what's in the movie.'

Like, I hate spoilers. Hate them. Even though they don't affect me too much, I hate people spreading spoilers to ruin the enjoyment for other people. I hate that. I would never intentionally do that."

Explaining his reasoning, Campea then brought up what sharing a leak like this would do to his own credibility, citing his "relationship with the studios" as a main reason why he should be believed that he saw these leaks as fake before circulating them:

"The one thing I have to protect more than anything else, besides my relationship with my viewers, is my relationship with the studios. Now look, giving negative reviews and bashing on movies is fair game. Everybody knows that. The studios understand that. Me even criticizing Bob Chapek as the CEO of Disney, that's fair game. He's the CEO of Disney; if he does stupid things, I'm going to criticize him. And I have. Some people accuse me of being too harsh on him. But that's fair game.

John Campea shared that, if these leaks do pan out to be real, and Tobey Maguire and Andrew Garfield are the big No Way Home surprise that fans will see on December 17, then he admitted he "will feel terrible about this:"

"The reality is, if these pictures end up being real, and I don't know that they are, to be honest... Let's say Tobey Maguire and Andrew Garfield are in the movie, and they don't show Tobey Maguire and Andrew Garfield in a trailer soon, I'm going to feel terrible about this. I mean, absolutely. I wish... that I just made the images myself, or that someone else just slapped a watermark on it, or that I was actually in cahoots with Sony and Disney. I got sent these pictures, I thought they were fake, I slapped my watermark on it because I wanted credit for sharing them, put them up. As soon as I heard that they could be real, I deleted them immediately. And I didn't even share all the pictures."

But despite his apparent guilt, Campea then went on to "give (fans) a little tease" of the pictures he had not shared via Twitter. Although, the only clue he gave was that another picture "involves someone in a mo-cap suit:"

If the images that John Campea tweeted are indeed genuine photos from the production of Spider-Man: No Way Home, then he might have just spoiled the greatest guest appearances in any Marvel movie ever.

Even though Tobey Maguire, Andrew Garfield, and Charlie Cox have all been rumored to appear in the third MCU Spider-Man movie for what feels like forever, these photos would be the first confirmation that fans can expect to see Daredevil and two Spider-Men from the multiverse appear in the film.

Campea played it cool in his explanation and made a compelling argument that he wouldn't want to risk his own credibility for the sake of sharing some leaked Spider-Man images. And if the YouTuber's demeanor tells his fans anything, it's that he'd rather just laugh this one off.

But Sony's swift response to the film critic's tweets that helped circulate these images online shows that this is no laughing matter.

To his credit, John Campea is always very mindful of spoilers when discussing new projects. For instance, he saw Eternals several times before it was officially released to the public and didn't discuss any spoilers on his show until after the film's debut weekend.

And as he mentioned, Campea was "dead serious" about the spoilers surround Eternals, suggesting individuals should be fined at least "$1 million or more" if they disclose anything about a new movie prematurely:

"BTW, in light of all the spoilers from Suicide Squad, Eternals and other films... I am TOTALLY ALL FOR press and other audiences seeing a movie early having to fill out a full personal information Non-Disclosure contract under penalty of $1 million or more. Dead serious."

However, if Campea truly did feel terrible about this, then his expressed hatred for leaks like these should motivate him to expose where these leaks truly came from.

A guy like John Campea can't expect a problem that he hates this much to resolve itself without getting to the root cause of the issue. At a certain point, it becomes hard to ignore that the critic has the tools he needs to help prevent this from happening again, but he has chosen to stay silent in fear of being "unethical."

This, combined with the John Campea Show's watermark existing on both images, pose some very tough questions that will likely go unanswered by the YouTuber.

It seems Campea is being genuine when he expresses that he truly thought the No Way Home images were fake when he shared them, but turning around to "give (fans) a tease" of one of the images he chose not to share seems less like the "fair game" he cites and more like he's hoping these leaks do pan out to be fake.

Nevertheless, if Sony really called these leaked images "the Mona Lisa," then chances are that the pics of Tobey Maguire and Andrew Garfield in their Spider-Man suits, as well as the shot of Matt Murdock sitting at Peter Parker's kitchen table, are what the producers of No Way Home have been trying to keep hidden until the film's release.

Find out if these images are the real deal when Spider-Man: No Way Home hits theaters on December 17.