After months of waiting, it finally happened. The long-awaited official poster for Sony and Marvel's Spider-Man: No Way Home has debuted.

In the days leading up to its reveal, similar posters promoting the multiversal threequel appeared on a bus in Australia and while that early imagery also showed Doc Ock's metal tentacles and Peter Parker in his Iron Spider suit, the official poster featured a different background offering the first look at Willem Dafoe's Green Goblin.

While the iconic villain appears to be wearing a similar suit and the same helmet from 2002's Spider-Man, it looks like his signature glider may have received an upgrade.

New Glider for Gobby in No Way Home?

In the original Spider-Man starring Tobey Maguire, Willem Dafoe played Norman Osborn who, in an attempt to save a government contract, tests an experimental serum on himself, resulting in a split personality and enhanced abilities.

As the antagonistic Green Goblin, Norman uses "pumpkin bombs" and flies aboard a military prototype glider to carry out revenge against his company's board of directors and, eventually, Spider-Man.

In an attempt to kill Peter Parker using the glider, Norman inadvertently kills himself. However, he does cameo in both Spider-Man 2 and Spider-Man 3 as one of his son's hallucinations.

Harry Osborn, played by James Franco, eventually follows in his father's footsteps, becoming the new Green Goblin in Spider-Man 3 and sporting a glider with a snowboard-inspired design.

Still, Willem Dafoe and James Franco aren't the only actors to portray the Green Goblin in a Spider-Man film.

In Andrew Garfield's The Amazing Spider-Man 2, Norman Osborn died of a genetic disease that his son Harry, played by Dane DeHaan, also suffered from. In an attempt to cure himself, Harry becomes the Green Goblin and flies aboard a glider with a different design than Willem Dafoe's or James Franco's.

Despite the various goblins who have appeared on the big screen, as far as fans know, No Way Home only looks to feature Dafoe's original Gobby; but just how he's able to return after having killed himself with his glider and alongside Molina's Doc Ock is one of the film's many mysteries.

Now, due to his appearance in the No Way Home poster, there's yet another mystery surrounding the iconic villain, which is how and why he's riding a new glider?

One thing both Norman Osborn and Doc Ock's Otto Octavius have in common is that they're scientists who used advanced tech to their own detriment. In a way, they're similar to Tony Stark and show what the genius billionaire could've become.

While Tony Stark created Peter Parker's Iron Spider suit, stills from the film have shown Ock's tentacles with similar red and gold coloring, suggesting that his metallic arms may have received their own Stark Tech upgrade.

This makes sense, as a scientist like Ock would no doubt be intrigued by the tech available within the MCU; and if he upgraded his arms, why wouldn't Norman Osborn?

After all, much like Oscorp, Stark Industries was a defense company making its fortune from military weaponry. Since Osborn's glider was a military prototype, who's to say that a similar glider hadn't been developed by Stark Industries before Tony's change of heart?

Now, in the 2002 film, the Green Goblin's glider wings are somewhat wide and bulky and the rotors are clearly visible. 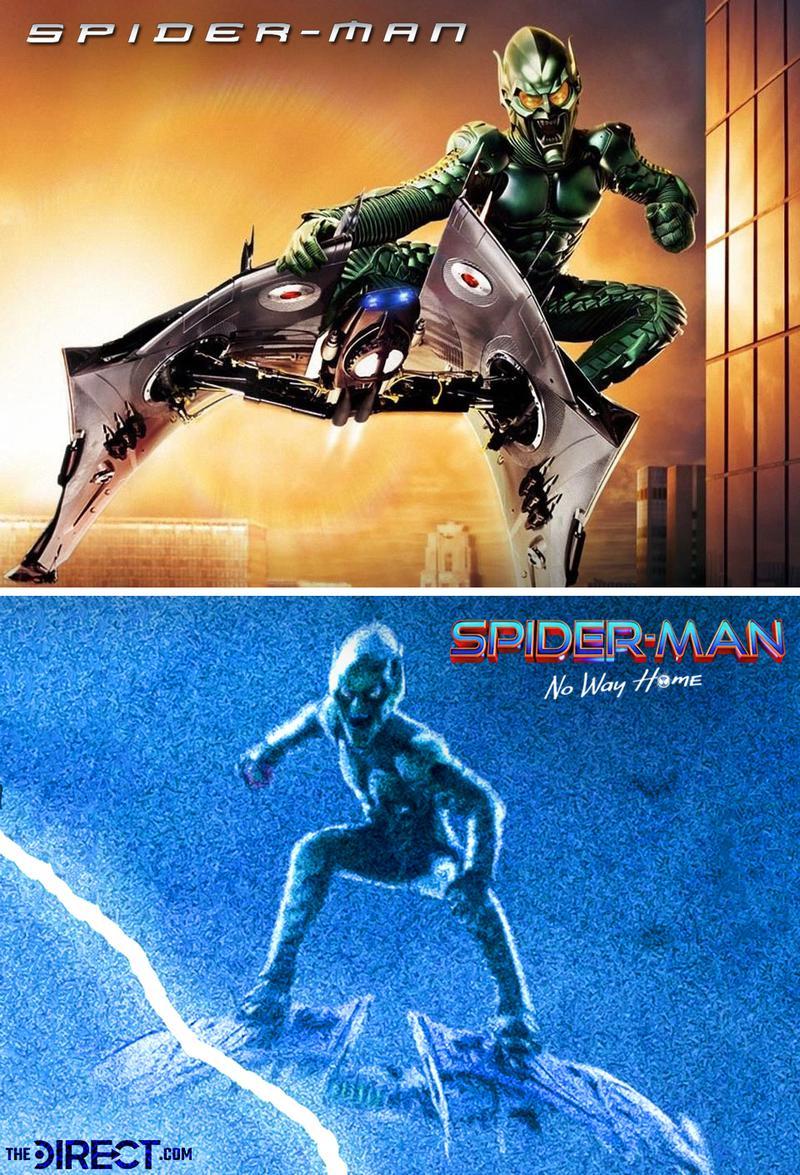 However, in The No Way Home poster, Gobby's glider is more streamlined and even menacing with a new jagged design.

A better view of the new glider from the poster can be seen below:

Green Goblin's Glider Back to Formula?

One constant throughout Spider-Man: No Way Home's promotional campaign thus far is that what little information fans get raises more questions than answers; and to further complicate matters, Marvel has a reputation for including fake visuals in their teasers and trailers to keep audiences guessing.

While fans still don't know how No Way Home will explain Ock and Green Goblin's on-screen presence, it makes sense that they both take on Holland's Spidey with more than what they had in their original films.

This could also explain why Peter Parker will be wearing his new Integrated Suit at some point in the film, and that's probably why fans haven't seen much of it in the film's marketing thus far.

Now that Sony and Marvel have officially revealed the Green Goblin for No Way Home, there's a chance that the anticipated second trailer will finally highlight Dafoe's return in the new footage.