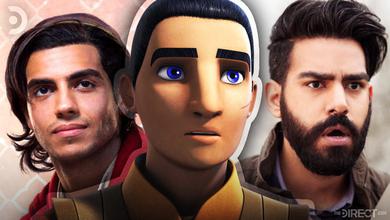 As the Star Wars presence on Disney+ strengthens, so do the opportunities for animated characters to make their live-action debuts. A handful of Clone Wars and Rebels veterans are set to appear in the second season of The Mandalorian in limited roles - Ahsoka Tano, Captain Rex, Sabine Wren, and Bo-Katan Kryze. It's also been rumored that both Ezra Bridger and Grand Admiral Thrawn are coming to live-action, though they won't be joining in on the Mando's adventures.

Reports indicate that Lucasfilm is looking for a performer of color, specifically of Asian descent, but that they are open to other ethnic backgrounds as well. The age range for the part is said to be between 30 and 40 years old, meaning the character's appearance will be taking place over a decade after Return of the Jedi. If the reports are true, this development is still very much in the early phases, and an actor has yet to be selected. Fortunately for Lucasfilm, they won't have to look further than social media to find actors interested in playing Ezra...

Actors Taylor Gray, Mena Massoud, and Rahul Kohli have all indicated via Twitter that they are interested in playing the live-action iteration of Ezra Bridger. The tweets, in response to the reports of the Jedi's impending appearance, can be seen below:

Would love a shot at any character in the SW universe 🙏🏽

It appears that the role of Ezra Bridger is a popular one. The young Jedi grew quite a bit over the course of the four seasons of Star Wars Rebels, and a follow-up to the series' cliffhanger ending was always inevitable. There have been many reports indicating that Rebels animated sequel is on the way, with the first season debuting in the fall, which would seemingly tie-in to Bridger's live-action appearance.

We've got an interesting group of interested actors here. Taylor Gray, while not necessarily one of the ethnicities the casting department is looking for, performed the voice role for Ezra in Rebels and would be an obvious choice for the part. Massoud, of Arabic descent, recently worked with Disney as the live-action Aladdin, and Kohli, with an Indian background, is best known for his role in iZombie.

Each of these actors would be excellent choices for the role for differing reasons. None are of Asian descent, as reports indicated were the preferred background, but with open-minded casting all three have a great deal to offer to Star Wars. Gray would be the most logical choice, as he helped create the character, but Lucasfilm clearly has several talented actors already interested that could make for a great live-action Ezra Bridger in whatever direction they choose.