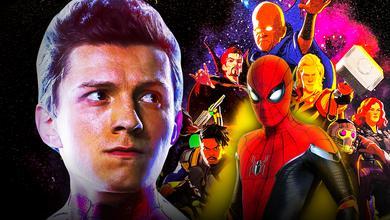 The release of Marvel Studios' first animated project, What If...?, will premiere on Disney+ sometime this summer. It will reportedly feature Chadwick Boseman's last performance as T'Challa, but this time as Star-Lord.

Also, many marvel fans are excited to see Peggy Carter be chosen for the Super-Soldier Serum and become Captain Britain in this multiversal adventure.

Recently, a leak revealed Gamora in Thanos' armor, Ultron with Infinity Stones, and a Hulkbuster suit seemingly made out of scraps from Sakaar. The series is promising to give fans an alternative look at characters they already know and love.

Now, a rumor regarding a new What If...? variation and possibly a new Loki character have been unveiled...

Via The Brick Fan, there are rumored LEGO Marvel Minifigures that reveal previously unknown characters in upcoming MCU projects.

One of these is a version of Steve Rogers that becomes Spider-Man instead of Captain America in a What-If...? episode. Another interesting character included is Throg, a creature with Thor-like abilities that may appear in Loki.

The full list of characters coming from the LEGO leak can be viewed below:

During San Diego Comic-Con 2019, What If...? was announced with a slew of returning actors to voice their respective characters. Chris Evans was not on that list despite Steve Rogers being featured in footage of the Captain Britain episode. However, after Deadline's January report that Evans would be returning to the MCU in the future, it is hard to know if or when the Boston native will portray Rogers again.

Until now, there was no indication a Spider-Man character would appear in this What If...? series. It would be an interesting spin if instead of becoming the Nazi-killing soldier during World War II, Rogers gets bit by a radioactive spider and keeps the streets of Brooklyn safe. The show could lean into someone along the lines of Noir Spider-Man who grew up during a similar era.

Even though this may not be Peter Parker, this would be Marvel Studios' first Spider-Man rendition without seemingly any coordination with Sony Pictures. Back in 2019 when Sony and Disney's Spider-Man deal expired and reports came out that the web-slinger's time in the MCU was over, many fans wondered if Tom Holland could appear on Disney+ through a contractual loophole. Of course, the two movie studios found a new deal, and Spider-Man: No Way Home is set to continue Peter's MCU story this winter.

To find out "what if Steve Rogers became Spider-Man," fans will have to check out What If...? on Disney+ this summer.