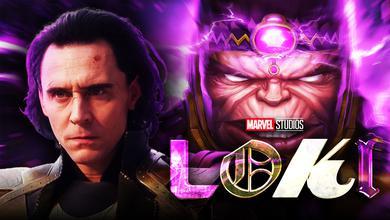 Last year, it was rumored that Marvel Studios was looking to introduce the villain MODOK into the Marvel Cinematic Universe despite him already having an animated show. It seems like ever since the organization was introduced and seemingly destroyed in Iron Man 3, the studio has been trying to find ways of reintroducing it.

Early concept art for Ant-Man and the Wasp even showed AIM making a reappearance in their classic beekeeper costumes from the comics, but this evidently never came to pass.

Hopefully, a newly-discovered Easter egg from the premiere of Loki could indicate that the evil think-tank will soon make a proper appearance in the MCU.

At the end of the premiere episode of Loki on Disney+, a squad of Minutemen arrive in Salina, Oklahoma in 1858 and come across a technologically advanced shovel stabbed into the ground.

The TVA agent scans the odd-looking shovel and says, "Time signature is early third millennium," but upon closer inspection, more details can be gleaned from it.

Specifically, it was manufactured by none other than AIM, otherwise known as Advanced Idea Mechanics. Additionally, the shovel is specified as a "quantum ore" shovel.

This was Easter Egg was first spotted by Reddit user moriarty6969.

AIMING FOR GRAND RETURN IN MCU

However, it's hard to pin down what "early" may mean when looking at a thousand-year time span, but it can be assumed that it's from the 21st century. This means that fans might be seeing a more technologically advanced AIM in a future MCU project.

This could likely happen in Ant-Man and the Wasp: Quantumania since the shovel was designed to dig up something called "Quantum Ore."