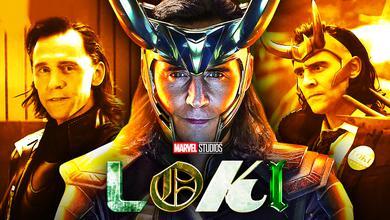 While fans aren't sure exactly what year they'll find Loki next, one thing is for sure — 2021 has been an incredible year for both Marvel Studios and Marvel fans.

With a full slate of films and Disney+ series to come, Loki on Disney+ is the studio's current hit project featuring Tom Hiddleston, Owen Wilson, and a whole new corner of the MCU known as the TVA or Time Variance Authority.

And much like the time-hopping element of the series itself, while Loki has only begun for Marvel fans, it's just now coming to an end for the show's director.

On Twitter, Loki director Kate Herron celebrated the end of shooting with a gif truly worthy of the God of Mischief and admitting that she finished the series "at my parents' kitchen table..."

Herron, who also served as an executive producer for the Disney+ series, also thanked Marvel Studios in her caption which read:

"And that's a wrap on Loki with our finale now gone to Disney Plus!!! I can't believe I finished this show at my parents kitchen table, the same table where I put my pitch together nearly two years ago. Thank you Marvel Studios for changing my life and to our wonderful team."

To date, only two episodes of Loki have streamed on Disney+ with the most recent being Episode 2 titled "The Variant."

Herron's farewell post follows another Tweet that she had posted several days prior where she said, "Last day in the office #loki"

IS LOKI AN EXAMPLE OF LIFE IMITATING ART?

Loki, along with WandaVision and The Falcon and the Winter Soldier, not only faced the challenge of being among the first MCU Disney+ series ever, but they also had to deal with COVID-19 delays and restrictions.

As Herron said in her tweet, she actually pitched the series to Marvel Studios two years ago, long before COVID-19 shut down the entertainment industry and forced Marvel to reshuffle their Phase 4 release schedule.

Her tongue-in-cheek mask warning that she posted for her "last day in the office" is somewhat of a reminder of how differently this journey came to an end for her and the cast and crew from when they signed on.

But in a way, that's life imitating art as Episode 2 of Loki confirmed the God of Mischief isn't as in control as he would like to be while determined to figure it all out anyway.

Regardless, Loki's six-episode run is off to a fantastic start; and now that finale has officially wrapped and in the hands of Disney+, Kate Herron is free to enjoy her success and Loki's time-traveling ride along with the rest of the fans.