As part of Disney's Investor Day event, fans were treated to four new trailers for upcoming MCU series coming to Disney+, including WandaVision, The Falcon and the Winter Soldier, Loki, and What If..?. Each trailer was jam-packed with so many quick instances from its respective series that watching each trailer once just wasn't enough to catch everything that goes on.

Marvel Studios' Loki may be the most intriguing upcoming MCU series, as this show's trailer arguably gave the least indication as to what the series will entail. The Direct has broken each trailer down for fans, spotting key details and clues to what each series will explore, but Loki still just makes no sense (in a very enticing fashion).

In Marvel Studios' Loki, the show will surely give fans some great MCU callbacks, as the story will explore Loki from 2012, right as Phase 2 of the MCU was taking form. Each clue found in the new trailer presents extremely exciting implications for the 2021 Disney+ series, including one that teases Loki's return to his "glory days."

As initially pointed out by The Direct's own Liam Crowley and later brought up by fan Anirban Das on Twitter, a short instance in the new Loki trailer shows Loki standing next to a familiar set piece from 2012's The Avengers, hinting that Loki will be taking another trip back to the events of the first Avengers team-up flick.

As Loki utters the trailer's title "Glorious," he appears to be standing next to the same mirror shown in Stark Tower in 2012's The Avengers, as seen in the comparison of the two shots below. 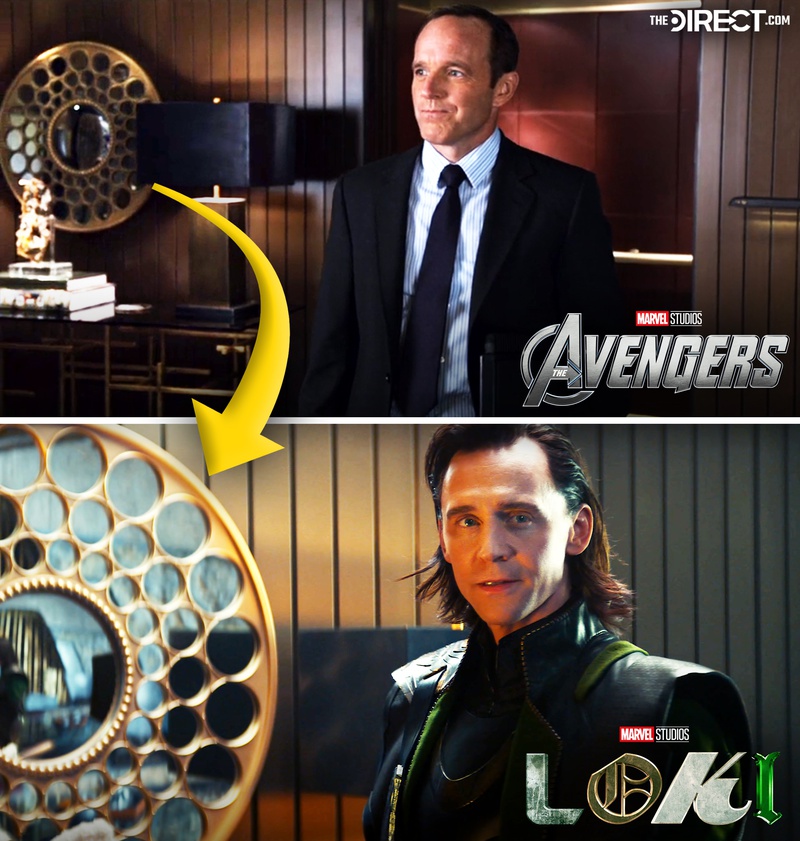 WHAT IS LOKI DOING BACK IN STARK TOWER?

This single shot presents several implications. Earlier on in the trailer, fans were shown Owen Wilson's Mobius M. Mobius going through key events in Loki's past, and one of the shots shown was when the Avengers defeated Loki at the end of The Avengers. Perhaps Mobius is interrogating Loki and asking him to answer questions about his malicious acts in the 2012 film, and when Loki refuses, Mobius is somehow able to take Loki back to these events to live out what exactly transpired.

In this shot, Loki is also dressed in the same attire that he wore in 2012's The Avengers, possibly hinting that instead of Mobius giving Loki an outside perspective when recapping the events of The Avengers, Loki's conscience might actually be transported back into the body of the 2012 Loki to give Mobius a better look. This scenario seems unlikely because the Loki series will directly follow the events of 2012's The Avengers since the Loki in this series is the Loki that had just escaped from those events during the time-traveling adventure Avengers: Endgame. However, such insight to Mobius could give him a better idea of what exactly Loki was up to on Earth.

Retrospectively, a completely different scenario is that this show could explore the question that many fans have had since The Avengers released: Was Loki acting on his own behalf, or was he under the influence of a higher power?

It's quite possible that after Loki's run-in with the Time Variance Authority, Loki's defense is that he was under the control of Thanos, possibly through the Mind Stone that was encapsulated in Loki's scepter, and that he shouldn't be held responsible for what happened in The Avengers. In order to prove this, Loki may have to take the TVA back through his recent history to show them he was being manipulated, and that he should not be held solely accountable for his actions. Classic Loki move, right?

It makes sense. If Thanos was able to operate for his entire existence without any known interference from the TVA, then maybe Thanos knew how to evade them, which would explain why they wouldn't have any knowledge of Thanos' wrongdoings throughout the years. If Loki can walk the TVA back through his recent experiences, it could actually clear the path for Loki to be off the hook.

Based on new action sequences and quick hints in the new Loki trailer, Loki seems to be put on some sort of quest in the series. Many believe this quest is one to escaping the grasp of the TVA, but what if that quest is actually to clear his name? Fans everywhere will finally get to see this all play out when Loki releases in May 2021 exclusively on Disney+.