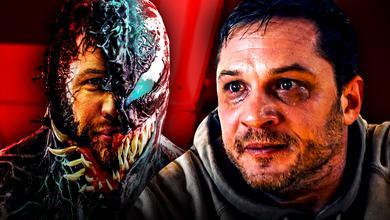 Marvel's Phase Four slate is absolutely packed with films and TV shows, but not every Marvel film coming out in the next few years is included in the Marvel Cinematic Universe. Sony and Disney made nice over Tom Holland's Spider-Man return, however, Sony is still pushing its own agenda with its Marvel properties.

One of these is Venom: Let There Be Carnage. Tom Hardy's second outing as the Spider-Man villain has finished filming and is ready to go, despite a few shifted release dates. Most recently the film was delayed a week to September 24, 2021, and it looks like the Venom sequel might stick to this release date due to the release of some surprising new merchandise.

In a surprising marketing move, the official Disney Shop has listed a Venom: Let There Be Carnage official T-Shirt for sale. The black shirt is plain with the Venom 2 logo and is available in a variety of sizes for $26.99.

"Prepare for a battle between two most sinister villains with this all-cotton crew neck t-shirt. Screen art of the Venom: Let There Be Carnage logo makes a powerful style statement wherever you wear it."

IS DISNEY AND SONY'S PARTNERSHIP GOING BETTER THAN EXPECTED?

This merchandise listing is a surprising one considering Venom 2 is a Sony-produced feature rather than a Disney one. It could be possible that the Sony/Disney deal that was negotiated over Spider-Man back in 2019 actually covered more than was advertised.

Disney has owned the merchandising rights of all Spider-Man-related properties since 2011. However, the House of Mouse hasn't retailed many movie-specific Spider-Man properties on shopDisney until recently.

This deal could just be marketing for now, but it could also hint at the groundwork being laid for more crossovers between the Disney and Sony-owned Marvel projects. Fans have wanted to see Tom Hardy's Venom and Tom Holland's Spider-Man crossover in a film for a while now. While a t-shirt listing is far from a crossover announcement, the studios did just make a deal to bring Spider-Man movies to Disney+ which is another indication that the partnership between the studios is going well.

This merchandise drop is also a good sign that Venom 2 is on track for release. Spider-Man: No Way Home received a similar merchandise listing last month and if marketing for both these films is beginning to ramp up, it's possible that trailers aren't far away.