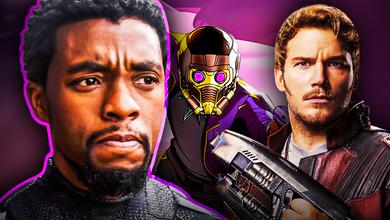 While a lot of attention is on Loki right now (just as he likes it), following close behind the God of Mischief's Disney+ series will be the animated anthology What If...?. So far, fans have only been given snippets of information and a short trailer to give some detail about what Uatu the Watcher's visions of alternate MCU histories will look like.

One confirmed storyline the show will look at revolves around the late Chadwick Boseman's T'Challa/Black Panther. Rather than finding Peter Quill, the Ravagers will instead find Prince T'Challa and the future Black Pather will take up the mantle of Star-Lord.

Some new merchandise gives a peek at what T'Challa will look like in his space-faring adventure.

A GLIMPSE AT T'CHALLA AS STAR-LORD

Courtesy of Wal-Mart, a new wallet features artwork of the Prince-turned-Ravager. T'Challa's Star-Lord, who will be voiced by Chadwick Boseman in What If...?, is shown wearing Peter Quill's distinctive helmet and wielding his pistol but has a look of his own inspired by Wakanda.

The wallet's other side showcases a logo depicting the helmet and also a necklace similar to the one T'Challa wore in Black Panther.

T'CHALLA IS FAR FROM EARTH BUT REMEMBERS WAKANDA

This new look is very obviously Star-Lord, but it carries a distinct feeling of Wakanda with it. Clearly, Chadwick Boseman's T'Challa hasn't forgotten his home during his travels, as he sports a necklace that heavily resembles the one he wore in the main MCU timeline as Black Panther. The gold lining and claws on his jacket also have a notable Wakandan feel to them and help distance him stylistically from the more rugged appearance of Peter Quill.

Quill had his Walkman to connect him to Earth, but largely took on the culture and style of the Ravagers he traveled with. It seems T'Challa might not lean into the Ravager culture as much as Quill and instead maintain a more regal air.

It remains to be seen what will become of Wakanda in the Prince's absence or if it will be touched on at all, though the presence of Erik Killmonger in the series' key art gives a hint to a possible look at what becomes of the secluded kingdom without T'Challa to take the throne. T'Challa will take up his new mantle when What If...? airs in August 2021.