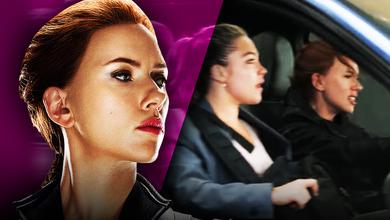 2021 opened with Marvel Studios returning to prominence thanks to two Disney+ exclusive shows, WandaVision and The Falcon and the Winter Soldier, that premiered in January and March, respectively. Even with the success of both programs, however, fans eagerly await the franchise's return to the big screen, upon which it built its legacy with 23 movies to date.

The 24th theatrical entry is Black Widow, Scarlett Johansson's first solo MCU movie, coming to theaters in July after delays dating back more than a year. Multiple trailers have shown off plenty of action set to come in this prequel, highlighting Natasha Romanoff's upbringing before she became a formidable member of the Avengers throughout the Infinity Saga.

With the film now less than two months away from its debut, the promotional tour is sure to be kicking up to give fans a new tease of what's coming. This comes in a big way tonight, courtesy of the MCU's upcoming Phase 4 movie star..

The excitement is already palpable as MCU fans get the first full clip from the franchise's 24th movie, and the first to come in over two years. While no specific plot details come from the 71-second scene, Marvel Studios gives a taste of the action and comedy that will come in the summer blockbuster.

Natasha Romanoff is seen in a blue SUV with Florence Pugh's Yelena Belova, with Belvoa yelling "Okay, anytime now, please" before Johansson simply yells "Shut up!" back at her co-pilot. The two proceed to drive all across the city in both forward and reverse, fleeing from an unidentifiable female assailant on a motorcycle through the streets of Budapest.

After the car's windows are shot out, the two get into this heated exchange during their escape:

Yelena: "Okay, you got a plan, or should I just stay duck and cover?"

Natasha: "My plan was to drive us away!"

Yelena then kicks the car door wide open and uses it as a projectile to take care of the motorcyclist chasing them before sarcastically telling Natasha "You're welcome."

The two Russian sisters are clearly dealing with a troublesome situation in this scene, and there are already questions about who exactly is after both of them in the footage. Whatever the answer is, it's clear that Marvel Studios is bringing the same level of quality and care to this film that fans enjoyed in every movie that came before it.

This should be the first of multiple clips for Marvel to release from the Black Widow flick between now and July, and it quickly brings back the anticipation for the movie that's been in promotion for 18 months. While it expectedly doesn't reveal too much in terms of the story, it's enough to get fans back into the swing of waiting for the next MCU outing.