In the numerous lull periods of Star Wars content throughout the years, the ever-present animated TV shows have kept the fandom entertained and satisfied. What many probably didn't anticipate, however, is that these series would become some of the most cherished pieces in the franchise, gaining enormous supporters throughout the Star Wars community.

Now that the final season of the revolutionary show, Star Wars: The Clone Wars, is airing its last chapter on May 4th, The Direct thought it would fitting to count down the best episodes from its sister program, Star Wars Rebels. With 75 different choices, we narrowed the list down to 12 separate volumes and a few honorable mentions below...

Note: Two-parter episodes are counted as one entry on our list.

"The Honorable Ones" (Season 2, Episode 17): This episode further erased any notion that Star Wars is “black and white.” The backbone of this show was always family, and the perfect spark to begin Kallus' turn as Fulcrum was to see the affinity shared amongst the crew of the Ghost.

"Hereos of Mandalore" (Season 4, Episodes 1 and 2): Seeing more Mandalore is always a good thing, and "Heroes of Mandalore" is no exception. Sabine Wren's arc that started in season three is completed by this gritty tale. The passing on of the Darksaber to Bo-Katan Kryze could also be a key scene for The Mandalorian's second season.

"Zero Hour" (Season 3, Episodes 21 and 22): Both parts of the season three finale act as The Empire Strikes Back to the show, and a great deal of this is due to the gripping forces of the Empire, which come head-to-head with the seemingly hopeless Rebellion. Furthermore, the Bendu unhinges, proving he was indeed the one in the middle and a badass. 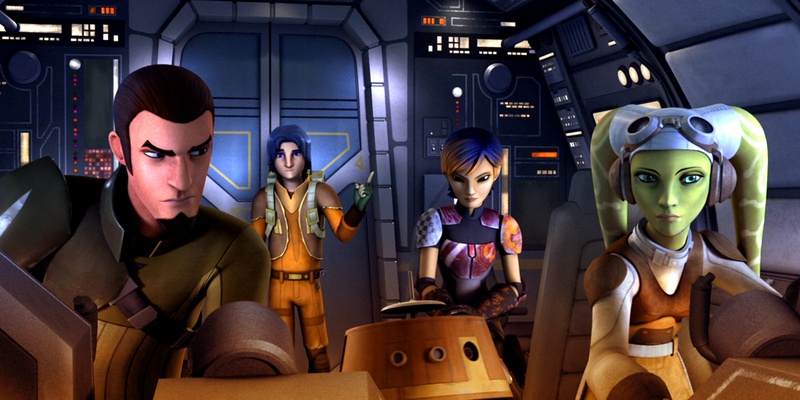 “All troopers, focus your fire on…on the Jedi.” – Agent Kallus

There’s no better way to start this list than with the very first episodes of Rebels. What an outstanding introduction to confident heroes, new locations and aliens, and the promise of another fantastical adventure in Star Wars. It established that there was still a shred of hope in the galaxy, whether it was with renegades who steal from the Empire or with the Aladdin-like street rat in Ezra Bridger. And if spectators weren’t hooked by the characters or narrative “Spark of Rebellion” offered, then they surely were by Obi-Wan Kenobi’s coded message that was merely mentioned in Revenge of the Sith. The message flawlessly lays the groundwork for the philosophical themes the show would eventually delve into. 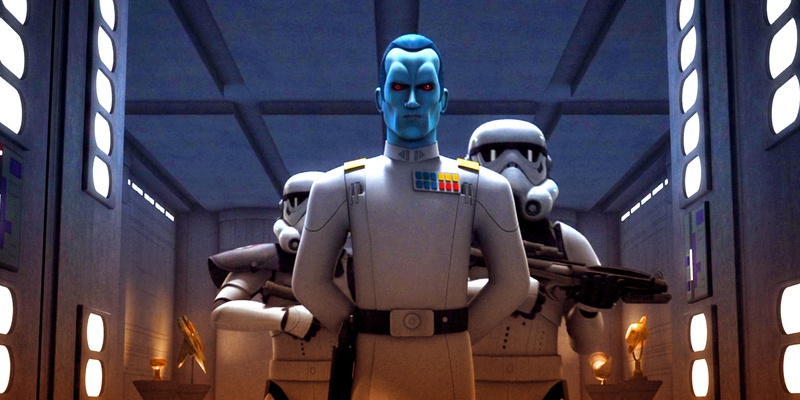 One of the more delightful surprises from the show was the turn of Agent Alexsandr Kallus, who served as a central villain for the first two seasons. Coming off a brilliant set up in “The Honorable Ones,” this episode helps in expanding the perspective of being an Imperial spy under the guise of cunning tacticians like Grand Admiral Thrawn and Colonel Yularen (by the way, what a cameo!). The interaction between Kallus and Ezra consists of stellar comedic timing, but the gravity of the situation never ceases. “Through Imperial Eyes” carried an unique and significant look at Thrawn’s endurance of effective strategies. 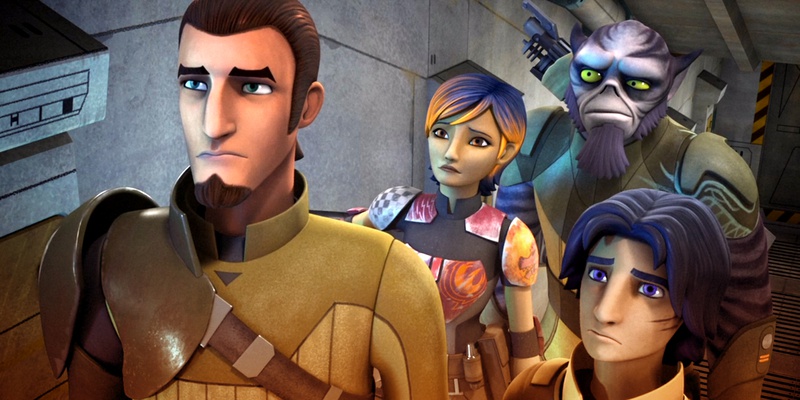 “No... because I have nothing left to fear!” – Kanan Jarrus

The conclusion to the first season of Rebels was one exhilarating joyride. This adventure was full of action, suspense, and signalled a vast future for the series. Viewers got their first look at other rebel cells at work in the galaxy, and worshipped Ahsoka Tano’s return to Star Wars after her unfortunate, but expected departure in The Clone Wars. And what good’s a padawan without her master, or former master in this case (cue the mechanical breathing). After Jason Isaacs’ sinister Grand Inquisitor met his fate, who better to bring back than the legend, Darth Vader. 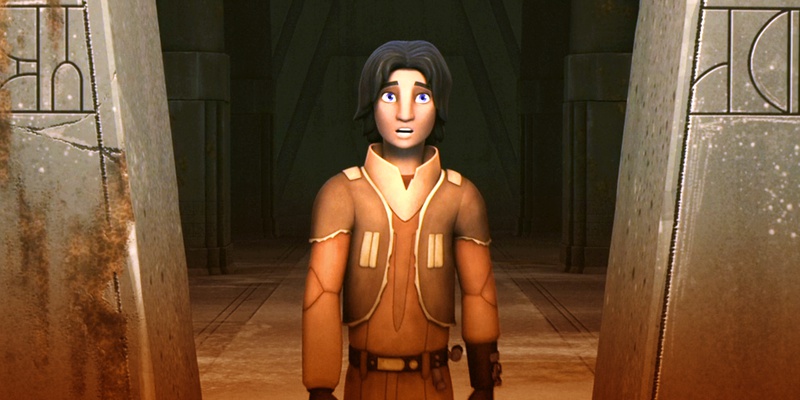 “Alive. They feel alive like I do now.” -Ezra Bridger

For some fans who may have felt apprehensive to consistently watching Rebels, “Path of the Jedi” was exactly what the series needed to kick it into a higher gear. A cool element of the episode, and the entire series, was watching the master and apprentice learn together, and who better to teach them than Yoda. It was remarkable to see Yoda’s presence take the form of the sparkly apparition he saw from Qui Gon Jinn in The Clone Wars. He guides both in coming to terms with the journey that lies before them. Ezra recognizes his center while Kanan discovers his true purpose for teaching. Little did fans know at the time that their storylines would become two of the best in Star Wars. 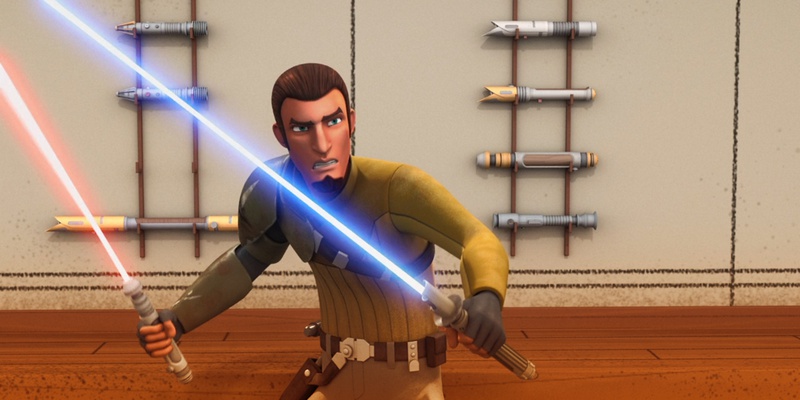 “You abandoned me! You failed me! Do you know what I've become?” -The voice of Anakin Skywalker

“Shroud of Darkness” set the stage perfectly for season two's finale. Once again, Yoda drops some wisdom on Ezra. It’s fascinating to see Yoda in the process of transitioning from the Jedi warrior of the prequels to the well of knowledge he is in The Empire Strikes Back. And Kanan officially becomes a Jedi Knight! Kanan understanding his role as a master and surrendering to the powers outside of his control was an insightful final trial that many of us in our own galaxy can identify with. Ahsoka confronting her greatest fear, that her old master is now a Dark Lord of the Sith, profoundly impacted her psyche before their confrontation on Malachor, and that slight wave from Yoda at the end meant so much as a fan of The Clone Wars. It represented their shared grief, respect, and hope. 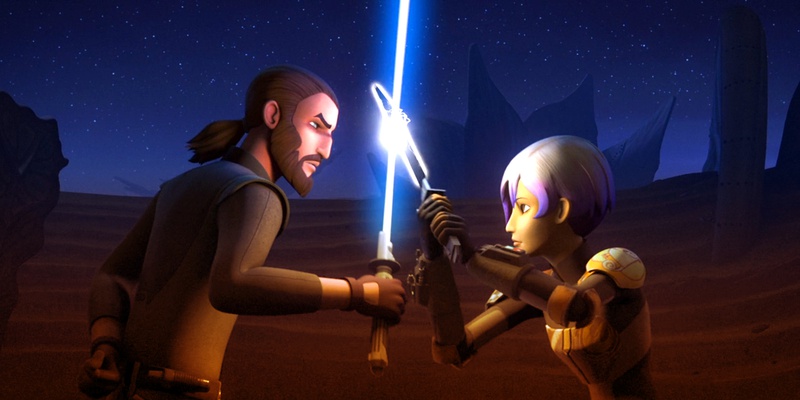 “I know this might not be what you want to hear. But for what it's worth, I would follow you.” -Fenn Rau

It’s worth noting that “Trials of the Darksaber” provided previously unknown information regarding the Darksaber, which was intriguing to say the least. But the focal point of the episode, by far, is the character growth of Sabine. Kanan relentlessly breaks down her walls piece by piece. Everything builds to this climactic scene where she unleashes her sorrow, but uncovers her will to push forward. Additionally, the musical cue for Sabine is excellent, and it strikingly echoes the intensity on screen. It’s such a compelling exploration into her past, and something for which Rebels will always be remembered. 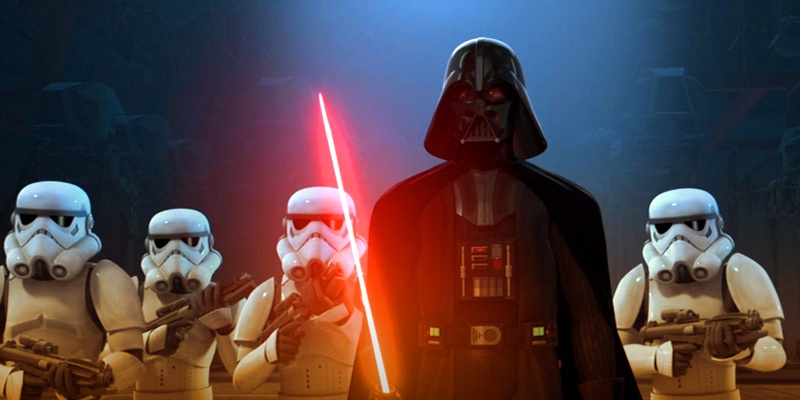 For many reasons, “The Siege of Lothal” was a gateway for Rebels to step into the larger scope of Star Wars. The crew of the Ghost has become part of a larger rebellion, even with Kanan’s resistance to taking part in another war due to his traumatic experience during the Clone Wars. The fandom sees a familiar face among the group in Ahsoka Tano, who gets the first hint that Anakin Skywalker may be alive, but not in the way she believes. Speaking of Anakin, Darth Vader is back in action more than ever. He accepts the task of hunting the insurgents, per the Emperor’s request, as this installment alludes to Vader being a formidable villain in the second season. 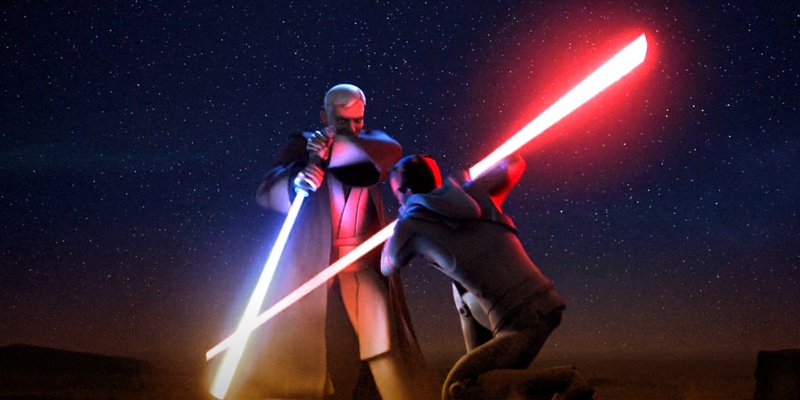 Excitement was through the roof for “Twin Suns,” for it was the ultimate face-off for one of the most intense rivalries in Star Wars. Observing a shrewder version of Kenobi only using words to cut down every barrier Maul built to mask his insecurities felt appropriate and warranted. Their duel is masterful, and while I could explain it, just listen to Sam Witwer break it down. Also, getting to hear Aunt Beru call a young Luke Skywalker as he runs across the Tatooine horizon with twin suns setting behind him is poetry in the greatest sense of the word. This chapter supplied the riveting conclusion to the duel of the fates, and Rebels delivered. 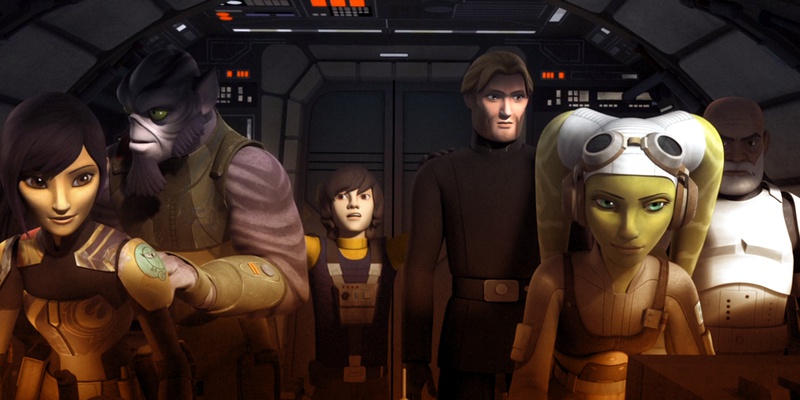 “Ezra's out there somewhere, and it's time to bring him home.” -Sabine Wren

Cue the tears. It’s challenging to find the right words that summarize the countless emotions felt in this astounding series finale. This episode brought the entire family together to liberate a world that’s at the heart of Rebels, harking back to the roots of the show. Ezra faces his inevitable destiny, collectively bringing everything together that he’s learned about the Force. In his closing scene, he truly embodied what it means to be a Jedi. “Family Reunion and Farewell” combined everything great about Rebels to create the definitive ending for these rebels that additionally teased a potential future series. 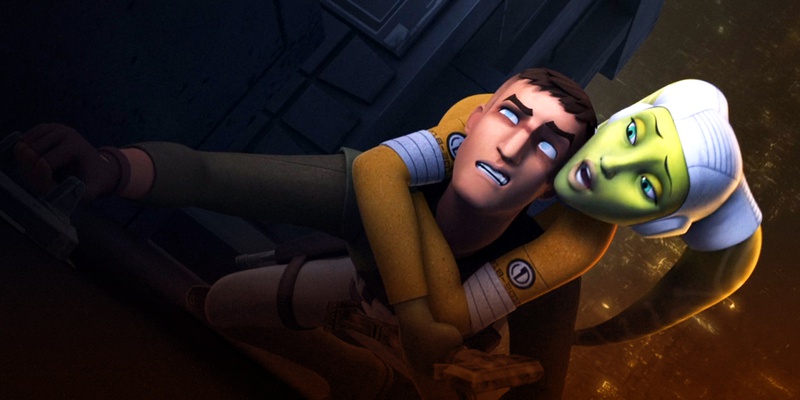 This one is always tough to go back to, but the storytelling is beautiful. Kanan and Hera’s back-and-forth throughout is not just lovely, but so genuine. Rebels always portrayed these two similar to that of a married couple looking after the children, and the audience really gets to see that here. The immense passion and affection they have for each other could warm the coldest heart, and it makes the ending far more painful. Throughout the fourth season, the show directs Kanan’s journey to this sacrifice. He continuously grows closer to the Force and realizes the moment where he’s needed most. From a wayward soul to a Jedi Knight, his arc came full circle. 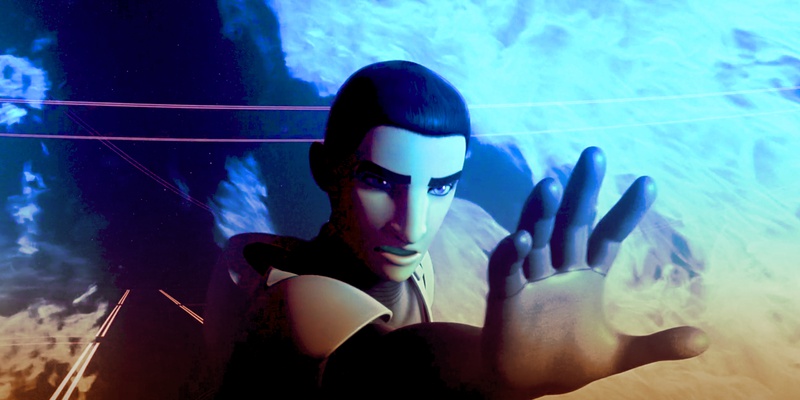 “That’s the lesson. I didn’t see it, but now…” -Ezra Bridger

“A World Between Worlds” exponentially expanded the Star Wars universe by crafting a Force-centered realm that introduced an unprecedented facet in Star Wars mythos: time-travel. In a place completely outside of space and time, audiences were bombarded with classic lines from beloved individuals of the franchise that touched every Star Wars-loving heart. They certainly cheered when witnessing the return of both Ahsoka Tano and Ian McDiarmid’s Emperor Palpatine. The character development, however, gets widely overlooked. Kanan’s will led Ezra to the portal for one last lesson, which is seen played out in subsequent chapters. This episode featured the penultimate trial in Ezra’s evolution as a Jedi, and serves as a reminder for why this galaxy far, far away is cherished across multiple generations. 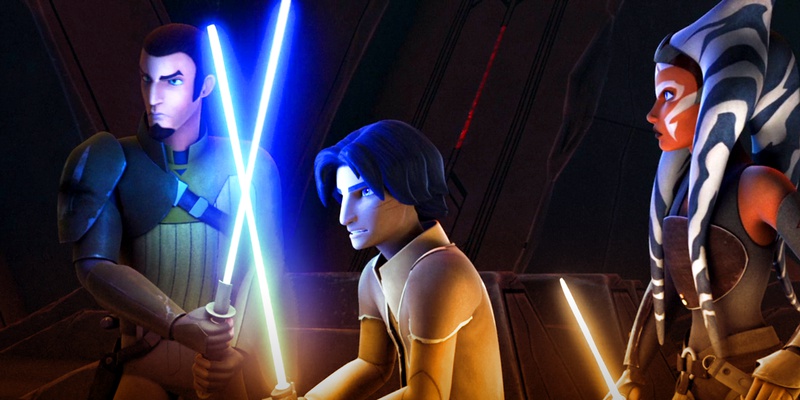 “I won’t leave you. Not this time.” -Ahsoka Tano

Sorry Yoda, there isn’t another. There is no other choice for number one on this list. There was no other episode that could top the anticipation built up for this Season 2 finale seeing that fans had been waiting for this epic moment since 2008.

The Sith temple on the mysterious world of Malachor was a perfect setting for Maul to come back to Star Wars and mark a new transition for Ezra. A blind Kanan trusting the Force to defeat Maul was another massive shift into unexplored territory for the Jedi knight. The crucial piece of this tale, however, resides with Ahsoka and Darth Vader. Their battle, coupled with Kevin Kiner’s emotive score, is phenomenal, but the subtle bits of dialogue keep scene grounded. Nothing in the entire show can surpass the jaw-dropping moment of Vader saying “Ahsoka” in the voice of Matt Lanter. This scene cemented the notion that nothing except the love for his children could turn Anakin back to the light, not even the past affection for his former padawan. “Twilight of the Apprentice” was pure, unadulterated Star Wars.