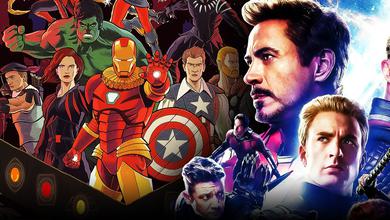 The Marvel Cinematic Universe has become a modern-day marvel in terms of its use of world-building and inter-connectivity through franchises. The 24 MCU projects that have released since 2008 have all been based in one way or another off the source material from Marvel Comics as the heroes have been adjusted and adapted to fit the mold of big-screen blockbuster epics.

One of the best aspects of the MCU is how many styles of storytelling are utilized from project to project, which can especially be seen at the start of Phase 4 from WandaVision to The Falcon and the Winter Soldier. This has always been the case in the comics as well, with different writers adding their own flair to each individual character on the pages.

This continues to be the case in Marvel's newest release, which brings the comics and movie universe together.

A new release from Marvel's website reveals that all four Avengers movies from the MCU are being reworked into Shakesperean plays by Quirk Books. The book will be available on September 28, and it's written by Ian Doescher, who also penned "William Shakespeare's Star Wars."

The description cites the book as one with "authentic meter and verse, stage directions, and entertaining Easter eggs:"

William Shakespeare’s Avengers: The Complete Works reimagines all four films as plays by the Bard of Avon, complete with authentic meter and verse, stage directions, and entertaining Easter eggs. Fans will experience their favorite scenes, characters, and lines in a new—yet fully faithful—way, through monologues and dialogue by everyone from Captain America to Groot (’Tis I!).

It's safe to say that this is an unexpected combination of literary history and the modern era of comic books.

The one moment in MCU history that lends itself to this mash-up is the first time Tony Stark met Thor in 2012's The Avengers as Iron Man joked about the God of Thunder's Shakesperean way of speaking. Before brawling over Loki and the Tesseract, Stark uttered the classic line "doth mother know you weareth her drapes," but this book is taking that dialogue to an entirely new level of expansion.

Chris Hemsworth's Thor will obviously play quite seamlessly into this story, especially as it recreates the first Avengers movie in which he still expressed himself like a full Asgardian. However, it will be interesting and exciting to see how Doescher recreates the rest of the characters in these movies to fit the style of the iconic William Shakespeare.

Will Thanos' monologues be that much more regal as he obtains the Infinity Stones? How much will Doctor Strange's arrogance shine through as he gives more lavish dialogue? These are just two of many questions fans are surely asking after this book's announcement to the world.

No matter how the story turns out, it will surely be a new take on the MCU as it's recreated as an epic stage play.

"William Shakespeare's Avengers: The Complete Works" will be available for purchase on September 28, 2021.