There are only three guarantees in life: death, taxes, and unresolved DCEU teases.

From Batman's "knightmare" of a post-'Apokoliptic' world to Joe Manginello's Slade Wilson teasing a legion of doom with Lex Luthor , the DCEU is littered with unaddressed elephants in their room.

Perhaps the most intriguing unresolved DC tease came in 2016's Batman v Superman: Dawn of Justice , when Bruce Wayne walks past a retired Robin suit. In a moment that got the entire internet buzzing, Dick Grayson's tattered costume is graffitied with an all too familiar menacing message...

HBO Max's Snyder Cut of Justice League is expected to be loaded with fan service, and director Zack Snyder has insinuated a big reveal. Replying to fans on Reddit , Snyder acknowledged that his cut of Justice League will "hint" at the backstory of Robin's death. 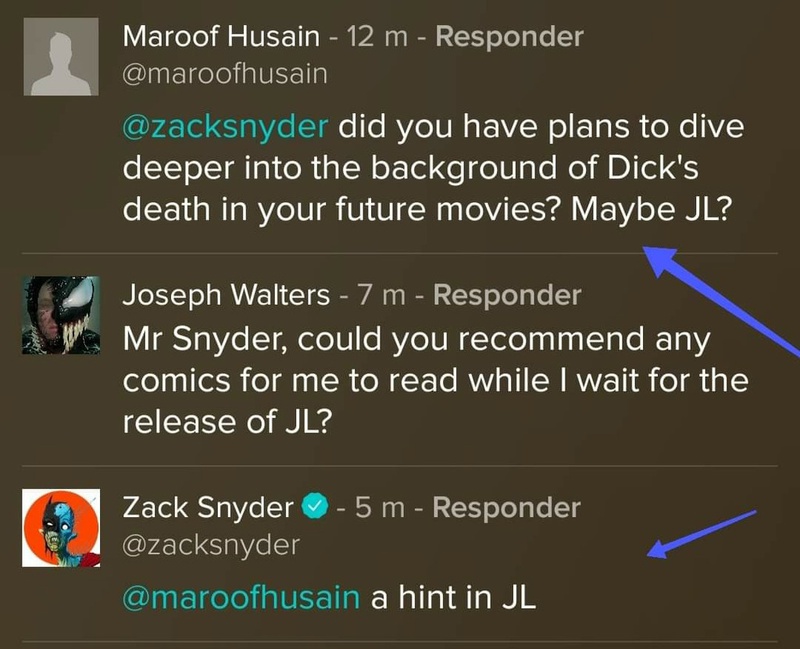 While Ben Affleck's tenure as the caped crusader has ended , there is still a lot of story to explore.

Taking an unconventional approach, Snyder elected to introduce Batman to the Man of Steel world as a 20-year veteran rather than retelling his age-old origin story. Because of this, Affleck's Batman was riddled with two decades worth of lore that fans hoped would be explored in a solo-outing, especially concerning the mysterious death of Robin.

Fans will recognize Joker killing the Jason Todd iteration of Robin as the driving plot point for the popular Batman comic storyline "Death in the Family." While Snyder says he intended for the DCEU Robin to be Dick Grayson , there's no saying that the Jason Todd-driven storyline couldn't have been adapted for Grayson.

Bruce has dialogues discussing "wind-up penguins" and "freaks, dressed like clowns," but his most fascinating line comes in a conversation with Alfred: "20 years in Gotham, Alfred. How many good guys are left? How many stayed that way?"

This line could have been teasing the former Robin's transformation into the anti-hero, Red Hood , where the former Batman sidekick takes on a violent life as a mysterious vigilante. While the ship has likely sailed on that storyline ever happening with Ben Affleck's Batman, it could be used for a future Robert Pattinson-led flick.

Snyder's Justice League is set to stream on HBO Max in 2021.