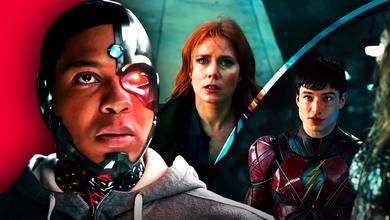 DC Films is currently going through a bit of a tough time with the mixed reactions from Wonder Woman 1984's release on HBO Max, but the Warner Bros.-led team remains optimistic for the near future. This is largely fueled by the upcoming release for the Snyder Cut of Justice League, which has been a hot topic of discussion for most of the last couple of years.

Amongst the drama that Warner Bros. has dealt with the past twelve months is the Ray Fisher/Joss Whedon/Walter Hamada saga. After Fisher initially made claims of abuse on the set of Justice League nearly six months ago, he has been adamant about holding everybody at Warner Bros. accountable for their reported actions and finding justice in the process.

That being said, Fisher is still passionate about the Snyder Cut of Justice League after the bond he formed with Zack Snyder. He reiterated this fact with a recent reveal on social media.

In a video on Instagram live, via Reddit, DCEU star Ray Fisher announced that he will be a part of the promotional tour for the Snyder Cut of Justice League before it premieres on HBO Max in March.

Even after his removal from 2022's The Flash, Fisher is intent on doing his part for the Snyder Cut's debut. When asked by a fan if he'll be part of the press tour for Zack Snyder's Justice League, Fisher shared the following:

"There’s no way you can stop me from doing press for Zack Snyder’s Justice League. There’s no way, there’s no way. What that all looks like, as far as the logistics and how those things get handled, I don’t know that just yet, but I expect that there will be some significant promotion in some way. I can’t imagine a movie that has been as highly anticipated as this not going whatever distance they can to promote, unless there’s something else going on behind the scenes."

FISHER ISN'T DONE WITH CYBORG YET

Even though Ray Fisher has been vocal about his issues with Warner Bros., his relationship with Zack Snyder is clearly what keeps bringing him back to the DC Extended Universe.

Fisher originally took on the portrayal of Cyborg for a short cameo in Batman V Superman: Dawn of Justice before his role expanded for the DCEU's team-up movie, Justice League. After Joss Whedon took over directorial duties for Snyder, things seemed to turn sour in a hurry before the original movie released in theaters in 2017.

Before the disturbing abuse started, Snyder and Fisher clearly developed a strong bond as they brought Cyborg to life with the rest of his DC teammates. Fisher has been outspoken and supportive of Synder bringing his vision for Justice League to life over the past few months, and that passion will continue now that the Snyder Cut is so close to arriving in full, though it remains to be seen exactly how much involvement Fisher and other cast members will participate in promotion for the HBO Max project.

The Snyder Cut of Justice League will debut on HBO Max in March 2021.