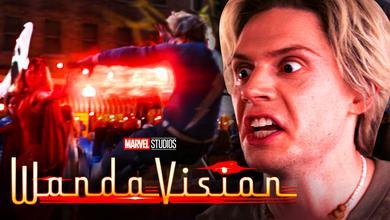 Since Evan Peters appeared as Pietro Maximoff in WandaVision rather than having Aaron Taylor-Johnson reprise his MCU role of Wanda's dead brother, people have been suspicious of Quicksilver's presence in Westview.

Episode 4 of Disney+'s sinister sitcom series ended with Pietro at Wanda's doorstep, leaving fans without a single answer as to how or why this happened. The most popular theory among viewers involved Peters still playing the role of Quicksilver from Fox's X-Men films and arriving in Westview somehow via the multiverse. And after a full episode of Pietro in WandaVision's sixth installment, this theory still stands with minimal holes poked in it.

But it also seems like there's something off about the recently-arrived speedster, and it's got nothing to do with the old X-Men movies.

There have been several hints within the MCU's first Disney+ show that this "Pietro Maximoff" is not who he says he is, and it's starting to look as though casting Evan Peters specifically for this role in WandaVision was a great way for Marvel Studios to keep their fans guessing.

PIETRO GETS SOME SUSPICIOUS MCU MERCH

A new Funko figure was recently unveiled for WandaVision's "Pietro Maximoff," which resembles Evan Peters' character from the show's sixth episode in his full Halloween getup. And it looks like he found his water balloons as well.

Wanda and her family also each have a frightful Funko figurine of their own, but Uncle Pietro's is curiously just a bit different from the rest of the group's.

Despite Pietro's Pop! donning his spooktacular comic-inspired costume like the rest of the Maximoff bunch, the descriptive "Halloween" indicator is not included next to his name as it is on the rest of the collection's packaging.

Even more curiously, Pietro's name on the box has quotation marks around it, setting it even further apart from any other Funko figure made for the new Disney+ show.

So what's the big idea here? Why isn't the speedster's new Pop! just labeled as "Halloween Pietro" to match the rest of his family, unless he isn't actually a part of the Maximoff family at all?

"UNCLE P" AND THE TWINS

Oddly enough, this isn't even the first time quotation marks have been used when talking about Pietro in WandaVision. Billy seems a bit more cynical towards Pietro than his twin brother Tommy. He refers to Pietro as "a man child" — and yes, he uses air quotes. That description couldn't be more different from the Pietro Maximoff that audiences met alongside his twin sister Wanda in 2015's Avengers: Age of Ultron, raising suspicions that Wanda may be letting an imposter crash on her couch.

Not by coincidence, there's already been plenty more chatter that Pietro isn't the real deal after WandaVision's sixth chapter dropped. A lot of that noise can be credited to Billy's opening line in the episode when he says that "Halloween is a magical holiday all about family, friends, and the thrill of getting to be someone else for a day!"

Obviously, this could be some heavy foreshadowing. What's curious here is where Billy would've gotten such a strong impression about Halloween from, despite this being his first fright fest. With the influence that Pietro has had on Wanda's twin boys in their short time together, it wouldn't be a stretch to suggest that Billy is actually regurgitating how Pietro described the haunting holiday to him.

This could mean that Pietro was actually the one looking forward to stepping into someone else's shoes for one frightful night. And who does he dress up as?

There's further reason to follow this train of thought when you look at what the Maximoff family is wearing for Halloween. Wanda and Vision are dressed in comic-inspired renditions of their superheroic attire but explain that they're actually supposed to be a Sokovian fortune-teller and a Mexican wrestler — respectively. The boys also resemble comic-accurate versions of themselves in a playful ten-year-old fashion.

It's Pietro's Halloween threads that stick out like a sore thumb. Made complete with duct tape, cut-off jeans, and a lot of hairspray, his crude Quicksilver costume seems like it would almost be a bit disrespectful towards Wanda's dead brother if he wasn't the one wearing it. Nevertheless, Pietro's costume isn't questioned nor is it ever explained, adding more fuel to the flame that appearing as "Pietro Maximoff" in Westview was the real costume all along.

THE DEVIL IS IN MORE THAN JUST THE DETAILS

Some may argue that "Pietro Maximoff" is in quotation marks on the speedster's first Funko figurine because his name in the X-Men films was "Peter" rather than "Pietro." While that is a good thought, it doesn't explain why his last name is included in quotes as well, as "Maximoff" was still Peter's surname in the X-Men universe.

Now let's look again at what's not on this Funko Pop!'s box art. Pietro's packaging is missing the "Halloween" indicator that was included on the other three boxes for Wanda, Vision, and Billy and Tommy. This could have been done because it will already be obvious enough by the end of WandaVision's debut season that the appearance of Wanda's dead brother was nothing more than a Halloween costume for Evan Peters' character.

Perhaps instead of including an indicator on the Funko box that this was a gag for Halloween, putting the name "Pietro Maximoff" in quotes is meant to recall something much bigger that Evan Peters' character will accomplish with this devilish disguise. If it plays out that way, then this will be yet another traumatic experience to add to Wanda Maximoff's long list, and will surely be a pivtoal plot point in WandaVision that will be immortalized into a three-inch vinyl figure labeled "Pietro Maximoff."