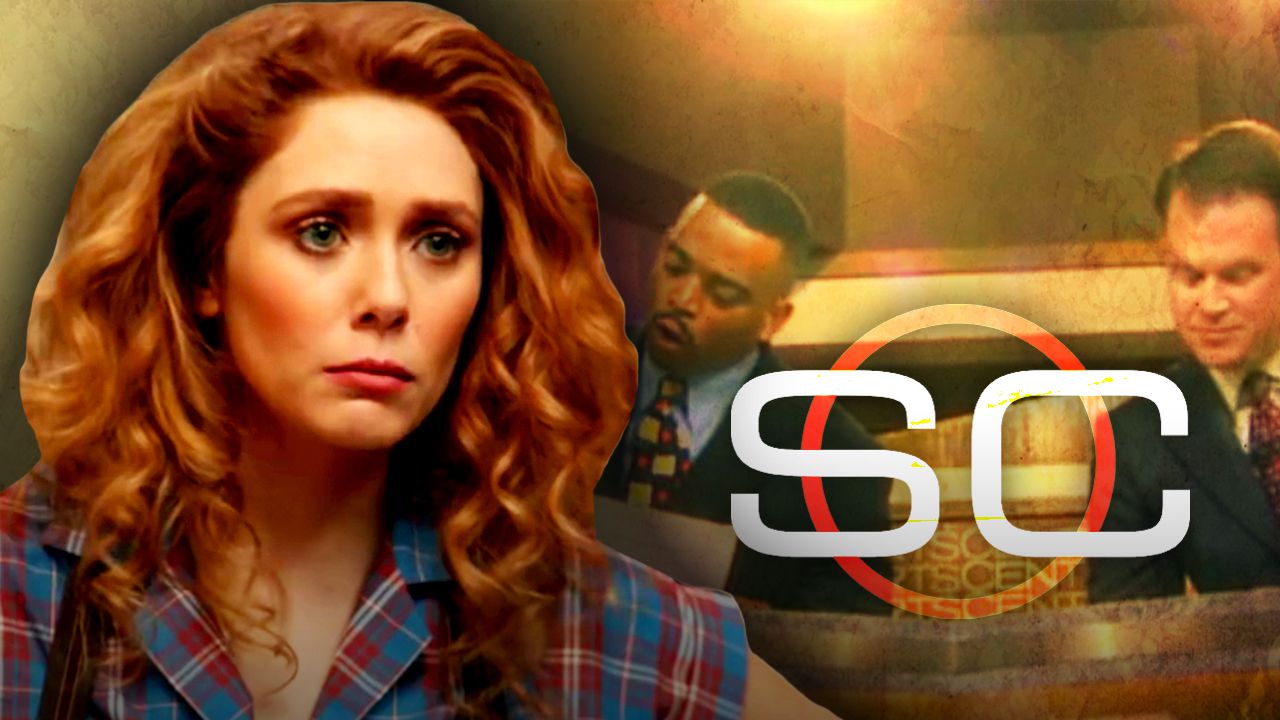 The marketing for WandaVision thus far has been a show in itself, keeping fans right on the edge of their seats for weeks on end, yet revealing only enough to keep audiences craving for more.

Thanks to the massive success of Marvel Studios, Disney also lets WandaVision marketing seep into tons of different niches. Whether it be on a giant billboard or as a cute little emoji that's hitching a ride on a hashtag, it's almost hard to avoid all the promos for the new Marvel thriller.

Now it seems that sports fans aren't safe from Wanda Maximoff's influence either, as the Scarlett Witch is seemingly flipping through the decades of sports broadcast in a new tie-in commercial for ESPN.

This new WandaVision promo features quite a few screens in what appears to be a newsroom or broadcast center, all depicting different moments within the new Disney+ series. The feed then phases to the now-famous line from Wanda to Vision: "We just don't know what to expect."

And then Wanda turns on SportsCenter.

After the WandaVision sizzle intro ends, the screen turns focus to a 1970s TV set, showing ESPN in its debut year on-air. The program is anchored by none other than George Grande, who is famous for hosting the first-ever broadcast of SportsCenter alongside Lee Leonard the day ESPN launched as a television network.

Grande is only able to utter "Welcome to ESPN's SportsCenter" before the screen phases to the next sequence, seven years ahead.

Similar to ESPN, a particular set of twins were also born in the '70s era of WandaVision, and have quickly become a main focus of the show. Interesting.

After getting a quick glimpse of what SportsCenter looked like in its earliest days, the screen phases and the TV updates to a mid-80s television set — something MCU fans will recognize as Wanda Maximoff changing the decade that Westview is living in. The year is now 1986, still within the first ten years of ESPN's early TV life.

The 80s news clip opens with the late John Saunders announcing a "trip around the world of hockey." The camera then quickly closes in on broadcast legend Chris Berman as he begins to report on the the-upcoming 1990 "Olympic dress rehearsal" before he's cut off by more of Wanda's time-hopping.

What's interesting is that a graphic with the words “UNITED STATES vs SOVIET UNION” is shown beside Berman before the feed cuts out. 1986 was the second-to-last Olympic Games that the USSR would attend before falling in December 1991. 1986 was also the year that the Soviets agreed to dissolve the Warsaw Pact.

Now we've jumped to the end of the next decade in 1997, which just so happens to be a wild year for the sports world.

Linda Cohn and the beloved Stuart Scott co-anchor this late-90s rendition of SportsCenter as Scott promises to get back into some NFL action before we hear his iconic "Booyah!"

In '97, Tiger Woods won his first Masters Tournament, the Florida Marlins won the World Series in just their third season as an MLB team, and Michael Jordan and the Chicago Bulls earned their second NBA championship three-peat.

And speaking of the NFL, the '97-98 season saw the Houston Oilers relocate themselves to Tennessee, and the Broncos updated their uniforms and went on to give the AFC its first Super Bowl win in fifteen years.

Oh, and this was also the year that boxing legend Mike Tyson bit off a piece of Evander Holyfield's ear in the third round of their WBA Heavyweight title bout. Wild year indeed.

Most notably, though, 1997 was also the year that ESPN gained the exclusive rights to air all Sunday Night NFL games. If ESPN took more control of sports broadcasting in the 90s, one can only wonder if Wanda's ability to control Westview will be amplified in the 90s as well.

Now we've jumped a whopping 24 years into the present day — a symbolic year of healing for sports everywhere.

The feed opens with cohosts Sage Steel and Matt Barrie going back and forth as Barrie claims he's right, while Steel argues that he "always thinks he's right." What's interesting is that the sequence then immediately cuts back to WandaVision footage, showing Vision explaining that he thinks something is wrong in Westview. This could possibly be alluding to the fact that Vision won't give up on his suspicions about his new hometown.

Athletics of every age, nation, and tongue are having to find new ways to compete while also safely navigating through the COVID-19 pandemic, which has proven itself to be a daunting challenge.

The full SportsCenter tie-in commercial for WandaVision can be viewed below:

#Wanda’s got sports in Westview now? 👀

It's not a coincidence that the 1979 birth of SportsCenter coincides with the 70s episode of WandaVision that saw the birth of Wanda's twin sons. It's also not by chance that the 1986 ESPN broadcast focused on the United States' tension with the Soviet Union, as SWORD is seen wrestling with the Scarlett Sokovian in the 80s era of Westview.

With this in mind, what can audiences expect from the upcoming 90s episode? The year 1997 that fans were quickly shown in this tie-in commercial was a year that was jam-packed with huge sporting events. Barriers were shattered, records were broken, ears were lost. There wasn't a dull moment.

This could make it a safe assumption that the 90s installment of WandaVision will mirror that. As the Disney+ series enters the last third of its debut season, tension couldn't be higher both inside and outside Westview. Wanda has seemingly reinforced the Hex she keeps around her new hometown, her kids just lost the dog the same day they found it, and Vision is questioning his own existence. Something has got to give soon, and Episode 6 may bring the start of the show's real action.

What can't be overlooked is that the year 2021 was included in this tie-in commercial as well, and the focus was put on a playful argument between SportsCenter's two hosts. They may have only been joking, but no sport was even mentioned in this current-day clip, hinting that it may be their conversation that demands the attention in this shot.

The clip transitioning straight from Matt Barrie claiming he's right to Vision thinking something is wrong is surely no accident — no, the coming focal point of WandaVision will undoubtedly be on the suburbanized synthezoid questioning everything he thinks he knows about his newfound life in Westview. If this is any indication of where the show will be once Wanda's reality has reached the present day, then the Scarlett Witch and her reanimated husband will be at greater odds than ever before.