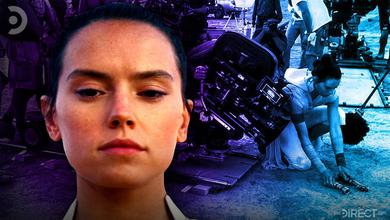 With a greater focus on upcoming Disney+ series being pushed by Lucasfilm, some attention has still been given to the Skywalker Saga and its latest entry Star Wars: Episode IX - The Rise of Skywalker.

The film will be receiving a non-canon epilogue of sorts, coming in the form of The LEGO Star Wars Holiday Special. This special will follow Rey and BB-8 travelling to different eras of the Star Wars franchise, before trying to get back to celebrate Chewbacca's Life Day festivities.

Several upcoming books will also delve into vehicles and weapons featured in The Rise of Skywalker. The Star Wars Vehicle Collection Book has in-depth descriptions and pictures of many of the ships and speeders from across the galaxy. The Lightsaber Collection chronicles the legendary blades of popular Star Wars characters, including the saber belonging to Leia Organa.

Episode XI is known to have somewhat of a troubled production, but a new image from Rey's last scene gives an idea of the effort that is poured into these films...

In a new Instagram post, The Rise of Skywalker's cinematographer Dan Mindel shared a new image from behind-the-scenes, of Daisy Ridley and the film crew shooting the last scene of the film.

The post was accompanied by the caption "Real time inserts with the actors on set."

An insert is a supplementary shot that is filmed from a different angle to a main shot, often to provide context or create more interesting visuals. In this case, the insert is the shot of Rey burying Luke and Leia's lightsabers on Tatooine. An interesting note is that close-up inserts like these do not often require main actors being in the scene themselves, so Daisy Ridley's involvement throughout is sure to be a treat.

This image slightly differs from the scene in the movie, as Rey places the saber hilts on a piece of cloth in order to wrap them up, before she plunges them deep beneath the sands. This could indicate a slightly alternate version of this scene, or simply be preparation to ensure that the sabers are captured in shot.

The location for this image lists this as taking place at Wadi Rum, a valley in Jordan which was used to double as Pasaana. It seems as though at least some of the final scene was filmed here to double as Tatooine as well, as Kevin Smith previously mentioned that some filming for the last scene also took place in London.

The photo demonstrates the sheer scale of the production and the amount of people required, even for a seemingly simple shot such as this. Whilst fans' opinions on the film may vary, the production crew's hard work and dedication can not be denied.