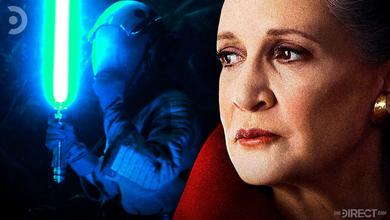 The Lightsaber Collection was one of many new books to be announced at a Comic-Con at Home panel. The book will chronicle a vast array of lightsabers wielded by various significant figures across the Star Wars universe.

Several images have surfaced from the book, with the Star Wars website providing official looks at some of the entries. These include those of Jedi Masters Yoda and Mace Windu to the iconic lightsaber held by the fallen Jedi Knight Anakin Skywalker, only to be passed down to Luke, and then to Rey. The book also goes into detail about blades held by the Sith, with one image displaying Asaaj Ventress' dual curved lightsaber hilts.

One of the big surprises from Star Wars: The Rise of Skywalker was seeing Leia being trained by Luke whilst wielding her very own lightsaber. This weapon would then end up in the hands of Rey and Ben Solo to be used in their final confrontation with Emperor Palpatine.

A new image has now been released, giving a close-up look at one of the galaxy's most popular characters blades...

In an exclusive report from Gizmodo, fans can now get a close-up look at Leia Organa's lightsaber from Star Wars: The Rise of Skywalker for the very first time:

The article also featured a brief description recounting Leia's time with her lightsaber and her Jedi training, as well as new portrait artwork showing her wielding the saber:

"After the collapse of the Empire, Leia Organa briefly undergoes training to harness her Force powers on the jungle moon of Ajan Kloss. Her brother, Luke Skywalker, acts as an instructor, and Luke seeks to pass down the same lessons he learned from Obi-Wan Kenobi and Yoda. But Leia senses only tragedy at the end of her path, specifically the unshakable conviction that her training will lead to the death of her son.

Leia quits the program and leaves her lightsaber with her brother, who keeps it with him during his years of exile on Ahch-To. As a Force spirit, Luke guides Rey to Leia's hidden saber, which Reys uses to defeat Palpatine on Exegol. Rey later buries the weapon on Tatooine to honor Leia's memory.

Leia's lightsaber is a work of art, defined by elegant symmetry and silver and gold hues that evoke Leia's regal upbringing on Alderaan. Curved metal grips are spaced around the midsection surrounding a crystal heart that projects a blue blade. The narrow neck and ringed emitter of the saber bear similarities to those on Luke's green-bladed lightsaber."

The description, unfortunately, does not reveal too much that was not already explored or explained in The Rise of Skywalker, such as recounting Leia's training on Ajan Kloss and the subsequent leaving of the Order in an attempt to prevent her son's demise.

This new image does give a detailed look at the various intricacies of the lightsaber's hilt design, though. The description also notes the similarity of the hilt's emitter to Luke's second lightsaber from Return of the Jedi, a detail that may have gone unnoticed without this close-up view.

More detailed looks at other lightsabers, including those of Ben Solo, Ezra Bridger and the mysterious Darksaber, can be explored when The Lightsaber Collection hits store shelves this fall.