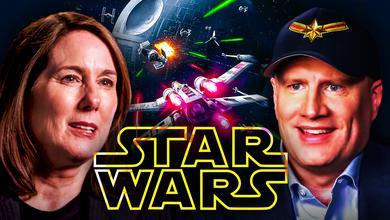 There's a great deal of work to come for Lucasfilm as the company pumps out several new Disney+ series, but the studio has been very tight-lipped on the franchise's theatrical future.

During Disney's Investors Day event last December, Lucasfilm President Kathleen Kennedy revealed that Patty Jenkins will be directing the next film in the galaxy far, far away. Rogue Squadron, set for a Christmas release in 2023, will follow the story of a group of fighter pilots. Taika Waititi's previously announced film is still underway, though the release window remains unknown.

To the excitement of many Star Wars fans, it was revealed in 2019 that Kevin Feige would be producing his own Star Wars movie, but little has been shared about the project since. One thing that has been announced is that Loki writer Michael Waldron will be writing the screenplay, one of many opportunities he'll be having after signing a big contract with Disney.

While it's impossible to say what kind of story Waldron will be delivering, one thing is clear: he's very excited.

In an interview with Vanity Fair, writer Michael Waldron expressed his excitement for his forthcoming work in the Star Wars universe with Lucasfilm president Kathleen Kennedy:

“You’ve heard all my references here. Star Wars! Indiana Jones! [Kathleen Kennedy], she’s made so many of my favorite movies. So to get to collaborate with both of those entities is a dream come true.”

Despite his major role going forward with the MCU, it was actually Star Wars that grabbed Waldron first:

“I grew up a pro-wrestling guy, probably more of a Star Wars guy. But my love of Marvel came from the movies.”

Writer Jeff Loveness, a collaborator of Waldron's on Rick and Morty, shared his confidence in the latter's ability to bring Star Wars back to its cinematic glory, saying that "he [Waldron] can be the guy to really kickstart the cinematic grandeur of those movies:"

“I think he can be the guy to really kickstart the cinematic grandeur of those movies. That's probably laying it on a little thick, but I really think he's the guy to do it.”

Rick and Morty co-creator Dan Harmon cautioned that Waldron will have to tread carefully to please the Star Wars fanbase:

Harmon maintained that the approach to the project will be critical, mentioning how "if you don't take it seriously enough, you're definitely doing it wrong:"

“If you take it too seriously, you're doing it wrong. If you don't take it seriously enough, you're definitely doing it wrong. It needs that total joy of the greatest franchise ever, along with a kind of swagger. I do think that Waldron would make a good match for that, but I don't know if he would make a good match for the machine that's carrying that stuff.”

HOW WILL WALDRON NAVIGATE THE STAR WARS UNIVERSE?

There's no doubt that Michael Waldron will be bringing his all to this project.

Kevin Feige has proven himself an extremely capable producer, and with the pre-existing working relationship the two have with Loki, he and Waldron undoubtedly have a solid foundation already for the movie to come. Couple that with Kathleen Kennedy's track record as a producer, and this film has a chance to be something very special.

Many of the new writers and directors in the Star Wars universe have come from MCU, such as Waititi, but most of them originally found their inspiration to work in film from George Lucas' space opera. Like Feige himself, Waldron was a Star Wars die-hard first, and if he can contribute something to the franchise in the way that Jon Favreau has with The Mandalorian, Lucasfilm will have identified the right kind of fan to helm new projects.

It would be wise of Waldron to heed the words of his Rick and Morty collaborators, however.

Star Wars fans are not as forgiving as Darth Vader when it comes to controversial projects, and J.J. Abrams and Rian Johnson are now well aware. Harmon's quotes seemed to specifically speak to the reception of The Last Jedi, which sparked an unending war within the fandom regarding Johnson's handling of Luke Skywalker among many other things.

The need for the right kind of seriousness and swagger certainly nailed the complaints about J.J. Abrams' efforts with The Rise of Skywalker, an experience that many Star Wars fans would gladly not repeat.

It's often said that nobody hates Star Wars more than Star Wars fans, but that isn't really the case at all. Any backlash that the franchise receives comes from people who love the world George Lucas created so much. While everyone has different ideas of how things should go, so long as projects stay true to the heart of Lucas' world and serve as compelling additions to the overall narrative, the reception will be just fine.

Waldron certainly has his work cut out for him, but he's collaborating with a stellar group of people and has been put in the ultimate position to succeed. It will be some time until more details about the film are shared, perhaps not until next May's Star Wars Celebration, but a memorable film of any kind will be well worth the wait.