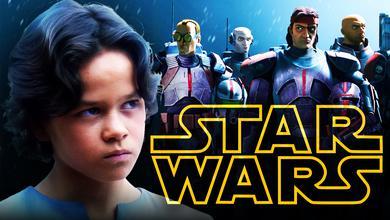 While Star Wars: The Bad Batch, Lucasfilm Animation's new sixteen-episode series, has centered on experimental Clone Force 99, the show has also provided context for other Star Wars projects and characters from, Return of the Jedi creatures to locations from the Jedi: Fallen Order video game.

In the series' ninth episode, Omega's capture by bounty hunter Cad Bane leads Clone Force 99 to question the young clone's identity and why the Kaminoans are so intent to get her back.

And surprisingly, her background not only revealed her identity, but also new information about a popular, original trilogy Star Wars character.

BOBA FETT HAS ANOTHER NAME

In the episode titled 'Bounty Lost," Tech reveals that Omega wasn't modified like the other clones and is a "pure genetic replication" of Jango Fett — the bounty hunter fans first met in Attack of the Clones and who served as the genetic template for the Republic's clone army.

When Hunter asks if there are other clones like her, Tech says, "To my knowledge, there's only one other. A male clone code-named Alpha, later referred to as Boba."

In Attack of the Clones, Lama Su tells Obi-Wan Kenobi that Jango requested an unmodified clone from the Kaminoans to raise as his son. And in that film, Jango refers to the clone as Boba.

While Boba Fett appeared in Star Wars: The Clone Wars animated series, he made his original trilogy debut in The Empire Strikes Back before seemingly meeting his end in Return of the Jedi.

However, Season 2 of The Mandalorian revealed that the hunter survived the sarlaac and is set to star in his own Disney+ series — The Book of Boba Fett.

Until now, fans were unaware that another clone like Boba existed and that his original name was, in fact, Alpha. Of course, this explains why Omega has her name, with Alpha meaning the beginning and Omega meaning end.

Considering Lucasfilm has a whole series dedicated to Boba Fett, it's clear the studio has a story to tell about this character - and apparently, they've already started.

The fact that Boba Fett originally had a different name, as well as a sister, is huge considering his cult fan following dating back to the late '70s.

But in a way, it's only appropriate that an animated series revealed this information, since the character technically made his debut in the abominable, animated Star Wars Holiday Special in 1978.

Temuera Morrison, who now plays the live-action Boba Fett, has already shared that The Book of Boba Fett will focus on the character's past. Who knows how many other reveals about the bounty hunter Lucasfilm has in store?

In addition, this episode of The Bad Batch showed more of the Kaminoan cloning experiments and that they're after Omega's genetic material. It's a story point that mirrors that of The Mandalorian and Moff Gideon's need for Grogu (Baby Yoda).

But it now seems like the two stories are more closely connected than fans originally believed.

A leaked crew shirt from The Book of Boba Fett that showed Grogu has led to speculation that Grogu may be part of The Mandalorian's spin-off. Perhaps Boba learns that he, Omega, and Grogu have all been wanted for cloning and plans to do something about it?

With seven episodes left in The Bad Batch Season 1, and with The Book of Boba Fett set to release later this year, fans won't have to wait too long to find out.

Star Wars: The Bad Batch airs on Fridays on Disney+.