When Marvel Studios and Sony Pictures reached an agreement in 2015 to bring Spider-Man into the MCU, they made it clear that they would be starting fresh. This meant a new Peter Parker, a new story, and new Avenger friends along for the journey. Regardless of this being the third take on the web-slinger, Marvel President Kevin Feige emphasized that this new telling would be a reboot, but not a replay.

Peter Parker's core values have been retained through Tom Holland's portrayal, but they've come with a refreshed layer. From Jacob Batalon's Ned Leeds replacing the usual Harry Osborn in the best friend role to Robert Downey Jr.'s Tony Stark sneaking himself into the Uncle Ben mentor position, the MCU's take on such a well-established hero has ridden a near perfect balance of bringing back the familiar while introducing the new.

That's not to say the aforementioned absent aspects won't see the light of day eventually. With a new trilogy of Holland Spidey flicks on the way, there's every possibility a Harry Osborn could show face on a college campus.

Characters like Harry remain in Peter's future, while others are permanently in his past. Specifically, not much is known about the MCU's Uncle Ben, other than subtle hints of his existence. Despite not being mentioned often on screen, Spider-Man: Homecoming writers nearly included a big nod to the iconic character.

While he's yet to show face in the Marvel Cinematic Universe, Ben Parker almost had a subtle presence in 2017's Spider-Man: Homecoming.

"We wrote a scene where May takes Peter to the closet and they choose one of Ben's old suits which she still hadn't thrown away."

That scene was ultimately cut, as Homecoming left any traces of Uncle Ben's existence on the cutting room floor. Responding to a fan who noted they intended on skipping the movie if Uncle Ben died on-screen again, Goldstein stressed that the writers' room had "no interest" in running back the character's death.

"Exactly. We had no interest in rehashing Uncle Ben's demise."

Through two live-action MCU Spider-Man films, Uncle Ben has only been acknowledged once.

In a brief frame from Spider-Man: Far From Home, Peter smell-tests his socks as he packs for Europe. He tosses his belongings into a suitcase labeled "BFP," the initials of one Benjamin Franklin Parker.

That scene emphasized that the MCU hadn't erased Uncle Ben from Peter's backstory, but rather had kept him in the shadows. This scrapped Homecoming scene would've been a blatant nod to Ben's existence, which could have led to too many cooks in the mentor department.

Homecoming continues where Captain America: Civil War left off, with Tony Stark firmly in the father figure position. Peter's relationship with Tony is so strong because of how much he confides in him, and vice versa. After all, it's the emotional memories of Peter that motivate Tony to run diagnostics on that inverted Mobius strip.

Cutting this scene stressed a full focus on the Tony and Peter dynamic, but that's not to say an Uncle Ben presence won't happen eventually.

To Peter Parker, "suiting up" usually means red and blue spandex. The high schooler only rocks formal wear for rare occasions, like a Homecoming dance, a Stark Internship photo op, or a court date.

Spider-Man: No Way Home will follow Peter's desperate attempts to reclaim his anonymity, but first, he has to clear his name. Regardless of the validity of Spider-Man's "Public Enemy #1" label, law enforcement acts accordingly, and Peter is primed to go through the criminal justice system motions.

Trailer shots showcase Peter presumably heading to court before he is greeted by Alfred Molina's Doc Ock. Before switching to his Iron Spider attire, Peter rocks a gray wool blazer along with a baby blue button up. If this formal wear is "one of Ben's old suits" like Peter almost wore in Homecoming, things get a lot more interesting. 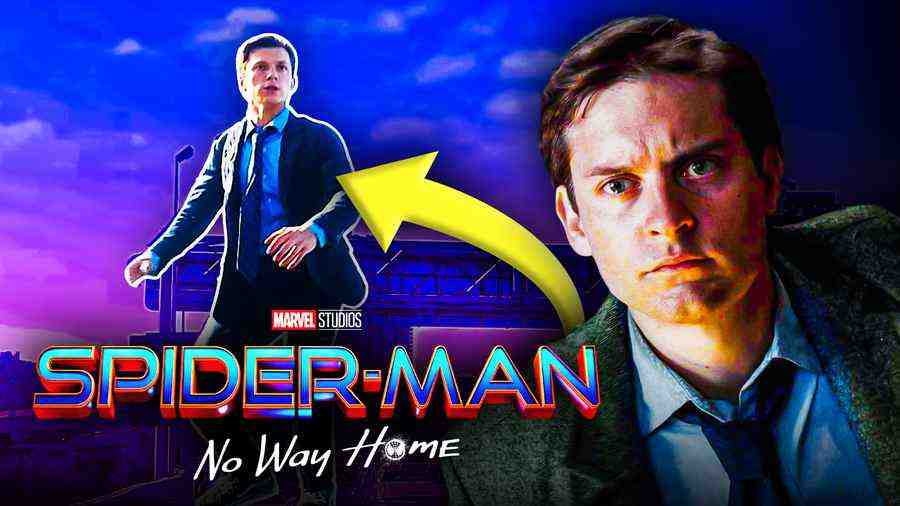 It didn't take long for fans to notice this formal wear is the exact get-up Tobey Maguire dons at the beginning of 2007's Spider-Man 3.  All signs point to Maguire showing up in No Way Home in a Multiversal reprisal of his Spider-Man role, but what if his face is already familiar to Holland's Peter Parker?

What if in another universe, Tobey Maguire is Peter Parker, but in the MCU, he's Uncle Ben?

Tobey Maguire being an Uncle Ben Variant has been a long-running fan theory, but Goldstein's comments are the best indication that it has any possibility of happening.

Spider-Man: No Way Home swings into theaters on December 17.