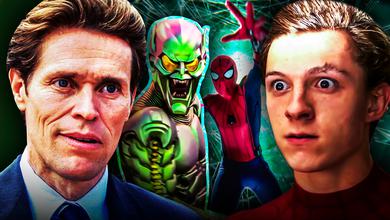 Even with three major theatrical outings coming from the MCU between July and November this year, no Marvel Studios movie has been the center of more discussions and speculation than Tom Holland's Spider-Man: No Way Home.

Rumored to house the event that starts to break the multiverse wide open, the web-slinger is set to team up with Benedict Cumberbatch's Doctor Strange for possibly the most ambitious solo film plot in MCU history. The two will do battle with Alfred Molina'a Doctor Octopus straight from 2004's Spider-Man 2, and he's just the tip of the iceberg.

Other villains reportedly set to join the movie include Electro, Sandman, and more, all being reprised by actors from either Sam Raimi's trilogy or Marc Webb's duology. No confirmed plot details have revealed what their intent is or how they will fit into the story, but fans have already theorized about the MCU potentially bringing together a live-action Sinister Six in this massive threequel.

Pushing this even further is a new rumor concerning what could be the movie's true big bad.

WILLEM DAFOE VS TOM HOLLAND IN NO WAY HOME

On Collider's The Sneider Cut podcast, host Jeff Sneider fueled rumors of Willem's Dafoe's Green Goblin from 2002's Spider-Man appearing in Tom Holland's Spider-Man: No Way Home by mentioning that he's confident that Dafoe will be the "main villain" of the MCU film.

As such, Dafoe's Norman Osborn would be leading a cross-franchise version of the Sinister Six, comprised of himself, Alfred Molina's Doc Ock, Jaimie Foxx's Electro, Thomas Hayden Church's Sandman, the Lizard, and Rhino.

Talk about a heavyweight match-up for the ages coming in this movie!

Rumors pointed to Willem Dafoe's return in Spider-Man: No Way Home as early as December 2020, when announcements for the film first started coming through the flood gates. Regarded as one of the better live-action Spider-Man villains, fans have been vocally excited about Dafoe potentially returning as Norman Osborn aka. Green Goblin.

Should Dafoe's Goblin come back the way Molina's Otto Octavius will, it would make sense that he'd act as the de facto leader of the Sinister Six with the resources he has at his disposal. He's the richest and most powerful villain out of his suit, and he was menacing and ruthless donning the suit and glider as well.

No matter what actually happens in this film, fans have their eyes and ears wide open for more information hopefully coming soon. Sony's social media accounts recently added the No Way Home title card to their profile banners, which could be an indication of considerable marketing coming in the foreseeable future.

In that light, leading actor Tom Holland's birthday arrives on June 1. That's nothing definitive, but it's certainly a date to watch out for after the way Marvel celebrated Shang-Chi actor Simu Liu's birthday.

Spider-Man: No Way Home will release in theaters on December 17, 2021.