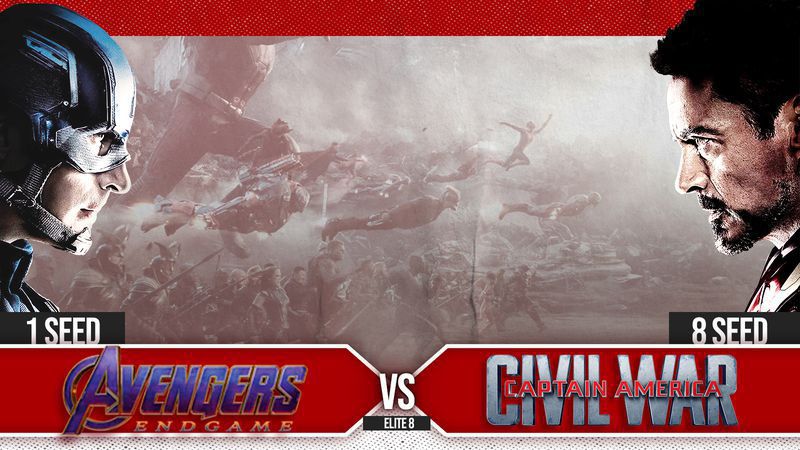 Once again, two major heavyweights face off in our last battle in this round of the MCU Madness Tournament. Two wars. One between the heroes we love and another between an alien army and our full Avengers roster. #8 Captain America: Civil War takes on the big dog, #1 Avengers: Endgame. Ding. Ding. Ding!

In Captain America: Civil War, we see two sides of the same coin fighting for what they believe is right. While this is simply the exclamation mark on the greatest character franchise in the MCU, many have looked at this film as Avengers 2.5, and we’re here for it.

I Don’t Care… He Killed My Mom

Many criticize superhero movies for their unrealistic lack of repercussions to the rest of the world. Well, it feels like Joe and Anthony Russo are speaking directly to that audience with this movie. An adaptation of the most legendary comic book event in recent history that asks the question: Who holds superheroes accountable? This is the movie that displays the face of the MCU with the heart of the Avengers. And we as an audience had to pick sides and join either Team Cap or Team Iron Man. (Remember how great the commercials were?)

The storyline impact of this movie is not only obvious but still impactful. After being brought together because no one hero could defeat Loki, our heroes are now divided. And while we have been teased with “cross-overs” in other movies (Iron Man 2, Winter Soldier, Ant-Man), this is the first true team-up movie without an Avengers title. When this mega-film worked with so many moving pieces, it opened the doors for similar films like Ragnarok, Infinity War, and Endgame.

A character arc is such a tough thing to achieve when your main character spends most of his time hurling a shiny shield at his problems (even though we love it). But here we see Steve Rogers, a man built to serve his country, declining to fall in line in favor of what he believes in. And Tony Stark, the billionaire once deemed unfit to join the team, cooperating in an effort to fulfill his destiny, saving the world. And at the end of the day, an argument can be seen for both sides. To do all of that while creating dream splash page stills and introducing two characters that will go on to lead billion-dollar movies, makes this movie seem much bigger than an 8-seed.

The culmination of 11 years of world-building and storytelling comes down to 182 minutes of action, drama and every emotion you can ever imagine. The result is the biggest movie of all time and one that boils down to 1 word… payoff.

In the first twenty minutes, we see Captain Marvel carry Peter Quill’s ship back to Earth, saving Tony Stark and Nebula. This is followed by a full-on attack of the Mad Titan where Steve Rogers goes to space and Thor cuts off Thanos's head. And then we see the 3 words that brought silence to movie theaters around the world, “5 YEARS LATER”. To approach the final chapter in this book in such a unique and bold way is just the tip of the iceberg of things this movie accomplishes. We then experience a Time Heist that takes us through the MCU, one of the most tear-jerking sacrifices in movie history, and finally THE biggest sacrifice in movie history. My editor asks me to keep these short so I will not even try to break down the weight this story hold, but just know it means a lot to Marvel fans everywhere.

In Spider-Man: Far From Home, we have only scratched the surface of the long term effects this movie has on the MCU. But the Russo brothers set this up in a way to make Endgame a tribute to the Marvel Cinematic Universe. A better way to look at this is what the MCU’s impact on Avengers: Endgame was. This film is a testimony to Kevin Fiege, Marvel Studios and everyone involved. That group of artists was able to go into the last game of the series and throw a perfect game. It takes an army, but it also takes 21 extraordinary films before to make it happen.

When you build a movie on top of a universe of stories, you are met with expectations that are seemingly impossible to achieve. But like I said before, the theme of this movie is "payoff". In Avengers: Endgame we simultaneously see the end of an era and the beginning of a new chapter all at once. I have yet to meet someone who feels that this movie left them wanting. And while I know we are not supposed to say any movie is perfect, especially ones that introduce time travel, this movie is as close as you can possibly get. Thank you, Fiege, Russos, Downey, and everyone involved. We Love You 3000.