This was the round that decided the fate of the Final Four in the MCU Madness Tournament . Entering the Elite 8 were two origin films, two Captain America movies, the third installment of a bottom-tier franchise and THREE Avengers movies. Both Chris Evans, Robert Downey Jr., and the Russo Brothers lead the way for 5 of the 8 films while only Guardians of the Galaxy does not involve any of the original 6 Avengers. These were some of the most tightly-contest battles so far. Let's see how we did.

And just like that, Captain America: Civil War, the most star-studded "solo film" in the Infinity Saga, is eliminated. While this may be a result of seeding or just the fact that ALL of these movies are at an elite level, it seemed fitting to see Avengers: Endgame take down Civil War. The movie that tore our heroes apart is one of the best. But the one that brings everyone back together gets the nod. Avengers: Endgame moves on to the Final Four.

Captain America: The Winter Soldier and Captain America: Civil War are the reasons that the Cap trilogy is the best comic book trilogy of all time (@MattRoembke, come at me Christopher Nolan fans!) But it is unfortunate that both of those films ran into the final two Avengers chapters of the Infinity Saga. The Winter Soldier proved that Marvel can make a top tier "small-scale" movie, while Infinity War proved that no one can do a team-up movie like Marvel Studios. Avengers: Infinity War moves on to the Final Four.

This was truly a battle of classic vs. new hotness. For many fans, The Avengers is what introduced them to the visual, comical and dramatic foundation that comes with virtually all MCU movies. And for many of those same fans, Thor: Ragnarok is the movie that perfected that foundation. But at the end of the day this could be seen as a battle between villain Loki and hero Loki. And while we all love Loki in Thor: Ragnarok, we will always prefer the wrongdoer burdened with glorious purpose. The Avengers goes against Avengers: Infinity War in the Final Four.

DO YOU BELIEVE IN MIRACLES!!! While this is our very first upset in the MCU Madness Tournament, this was one that might not be a complete shock to everyone. Guardians Vol. 1 holds the number one spot for many MCU fans (including the one writing this blog). But no one can deny the incredible impact Iron Man had all the way back in 2008. The two highest-seeded non-Avengers movies were neck-to-neck all the way through. But the one that started it all gets the win here. It's Iron Man vs. Avengers: Endgame in the Final Four.

AND THEN THERE WERE FOUR... 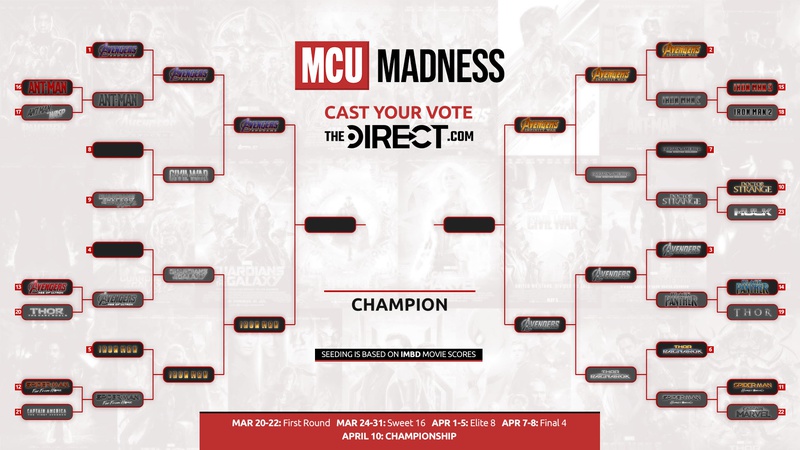