In Round One of the MCU Madness Tournament , the nine highest-rated movies in the Infinity Saga received a bye. This left the back end of our field to battle it out for a chance to advance to the Sweet 16. We were faced with some tough matchups, pitting fan-favorite characters and films against one another. Our readers voted on which movies they think deserved to move on and face the elite of the Marvel Cinematic Universe. Here are the results.

In our first matchup , we had the Sorcerer Supreme take down our favorite green rage monster… and it wasn’t even close. In this battle of origin stories, The Incredible Hulk seemed to never have a chance being that it was released to mixed reviews eight years prior to its opponent. When the movie that is most criticized for its CGI downfalls goes against one of the greatest visual sequence films of the decade, you can’t expect much of a fight.

#10 Dr. Strange moves on to face #7 Captain America: The Winter Soldier in the Sweet 16.

Our second matchup was the first and only Phase 3-exclusive matchup of the tournament with the result of Spider-Man: Homecoming taking down the scrappy 22nd seed Captain Marvel. Many believed that the story of Carol Danvers should have been ranked much higher in the tournament, so it got a pretty tough draw. Seeing a movie that grossed over one billion dollars go down in the first is a testimony to the fact that much of the world is still crazy about Spider-Man.

While Homecoming is one of the stronger movies coming out of Round One, it has to go up against a Tier A MCU film in the Sweet 16. #11 Spider-Man: Homecoming moves on to face #6 Thor: Ragnarok.

And if you did not buy into the Spider-Man hype in the last matchup, here he is in his MCU sequel taking down Captain America: The First Avenger. This is one of our closest matchups yet as the Cap origin movie is as strong a #21 seed as there could be. But just like we saw in the matchup between Spider-Man: Homecoming and Captain Marvel , taking down the Webhead is no easy task.

The final movie of the Infinity Saga will take on the franshise's very first film in the Sweet 16. #12 Spider-Man: Far From Home goes against #5 Iron Man.

As the only Avengers movie that did not qualify for a first-round bye, many expected the MCU’s second team-up film to move on pretty easily, and it did . Thor: The Dark World is anything but a top tier movie, but going against one of the more criticized films in the universe gave it hope. Ultimately, Avengers: Age of Ultron won with ease.

#13 Avengers: Age of Ultron will move on to face #4 Guardians of the Galaxy in the Sweet 16.

Kings vs. King. Wakanda vs. Asgard. And Vibranium vs. Mjolnir. And the billion-dollar fan-favorite of Phase 3 wins out. Thor is one of the building blocks of the MCU and one that most fans generally enjoy. But putting virtually any Round One film against Black Panther seems like a built-in bye.

While there were no upsets in Round One of the tournament, #14 Black Panther seems to have the best chance to pull it off against #3 The Avengers in the Sweet 16.

And in our Shellhead vs. Shellhead matchup , we see the character analysis of Tony Stark vs. a full-blown celebrity Iron Man, and the heart and soul of Tony Stark wins out. Both of these movies received a wide range of positve and negative reviews from fans and critics alike. But at the end of the day, the winner is the movie that answers the age-old question: What happens when you take the man out of the suit? Iron Man 3 proved to be the victor, although Iron Man 2 did put up a fight in its Round One defeat.

And our final battle is our closest one yet. But it is the origin story to ultimately take down the tag-team film in our Ant-Man movie matchup. The 16/17 battle was bound to be close, and it seems like fate that both films fall to the same character franchise. While we cannot knock Ant-Man for surviving Round One, one wonders if the same result would have come had these movies been swapped in the rankings.

#16 Ant-Man will see no such home-field advantage as it goes against our #1 overall seed Avengers: Endgame in the Sweet 16. So essentially, we all have to answer the tough question… which one is the better Paul Rudd movie? 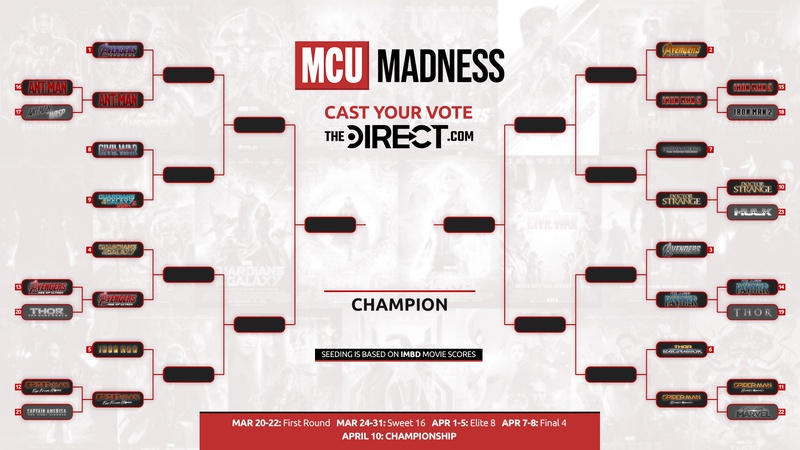