The Sweet 16 of the MCU Madness Tournament featured some of the most beloved comic book movies of all time. We had two Spider-Man films, a variety of different team-up movies and the debut of the Guardians of the Galaxy into the MCU Madness Tournament. But even with all of these great MCU films battling for a spot in the Elite 8, it was exactly those movies who won out: the elite. Here are the results for the Sweet 16 followed by a look ahead to the next round before the Final Four.

This one was heavily predicted to be a blowout and that’s exactly what it was. So instead of telling you why Avengers: Endgame is so fantastic, let’s focus on why this wasn’t Ant-Man ’s fault. Ant-Man is celebrated for being such a small story and focusing on a great cast of characters. That type of film never stood a chance against the spectacle that is Endgame . But one last time... at least I got the van.

Another Avengers mega-film, another blowout. But there is a difference between the fun and charming Ant-Man and the deep dive character analysis that is Iron Man 3 . The Tony Stark saga ends with a polarizing film that leaves a calming yet awkwardly false sense of finality with Iron Man. Infinity War ends on arguably the biggest cliff hanger in movie history. That’s one of many reasons it advances to the Elite 8.

We have not yet seen an upset in the MCU Madness tournament and many thought this would be the one. But after a shocking 77 to 23 win, The Avengers takes down Black Panther with a surprising amount of ease. This results seems to be moreso a showing of how fun The Avengers was in 2012 and less about it being “better” than Black Panther . You never forget your first love. And for many, this is it.

This was a matchup between the two movies that give us our first real looks at the McGuffin of our universe, The Infinity Stones. One is a fun, space-filled adventure introducing us to new characters that we will fall in love with by the end. The other is a battle between man and machine that follows our favorite heroes through their moral differences. The Direct audience went with the fun space adventure as the Guardians advance.

This is our closest matchup in the Sweet 16, and it is fitting that they both act as the bookends of the Infinity Saga. Iron Man pulls this one out as the history of the MCU gets the nod over its future. Much like in the Avengers versus Black Panther matchup, this is a testimony to the foundation of the MCU and how it built what the rest of these movies were able to grow upon.

A huge factor in this tournament is the “re-watchability” of these films. Whether it's for the feel-good comedy, good storytelling or amazing action, fans tend to pick the movies they want to watch over and over. Thor: Ragnarok is considered by many as the most rewatchable movie in the MCU. After beating out the fan-favorite 11-seed Spider-Man: Homecoming , it becomes the new favorite to get an upset in the Elite 8.

Many saw this one coming in this battle between the grounded and physical against the multi-dimensional sci-fi thriller. Captain America: The Winter Soldier is widely regarded as one of the soundest movies in the MCU. Great plot, great villain, amazing close-up action and a whole lot of Scarlet Johansson being a badass. Captain America: The Winter Soldier will look to make some noise against Avengers: Infinity War in the next round. All of you Winter Soldier stans better be ready to support the MCU’s first spy thriller.

Our final matchup of the Sweet 16 was the heavily anticipated 8 v 9 matchup. Both of these movies received a first-round bye and both feature a wide variety of fan-favorite characters. And while Guardians of the Galaxy, Vol. 2 is able to do things as well as any other movie in the MCU (if not better), it stood no chance against Captain America: Civil War . Almost every hero you love, plus the debut of Spider-Man AND Black Panther. Who could possibly compete with a movie that has so many incredible things going on at once? ( Avengers: Endgame has entered the chat.)

AND THEN THERE WERE EIGHT... 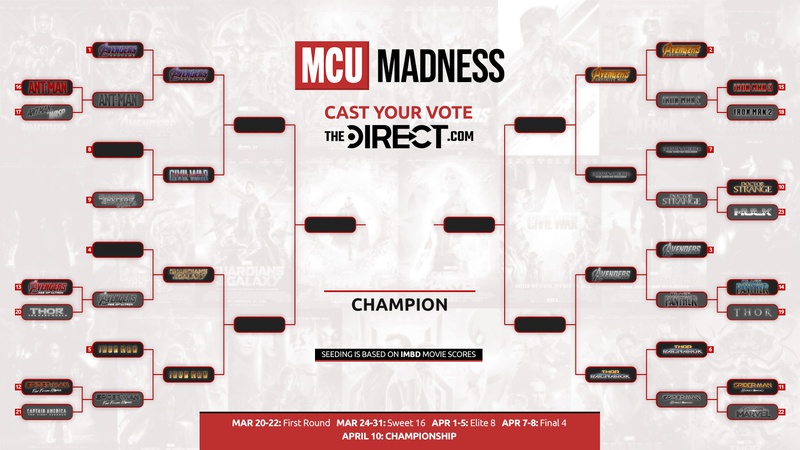