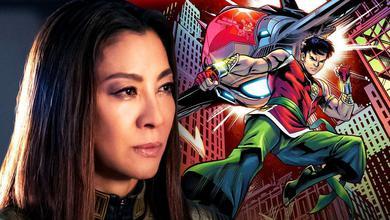 Warning: This article contains potential spoilers for Shang-Chi and the Legend of the Ten Rings.

Fans will have to wait a little more to watch Shang-Chi and the Legend of the Ten Rings in theaters since the film was delayed to July 2021. Bannered by an impressive Asian cast, Shang-Chi is set to introduce the Master of Kung Fu as well as giving a proper on-screen, live-action debut to The Mandarin.

Production for Shang-Chi is well underway in Australia after several months of corona-induced delays. As expected, plot details are still being kept under wraps, but previous rumors suggest that it will be an MCU film like no other. There were rumors of several flashbacks sequences that could dive into the origin of Tony Leung's Mandarin even further, while the presence of an Asian village and the casting of archers to the mix could hint to the overall outlook of the film.

Even though Shang-Chi leans more towards the grounded territory of the MCU, the presence of the Ten Rings of Power of Mandarin could potentially pave the way for more mystic forces. Now, a new piece of evidence may shed some light on how this plot element will play out in the film.

Insider Charles Murphy of Murphy's Multiverse uncovered evidence that the huge set that was being built in Sydney will be featured as The Valley of the Sleeping Dragon, otherwise known as the resting place of Fin Fang Foom. Murphy's source revealed that the Valley is "set as a hilly, seaside location with a temple at its center with the green screen serving as the seashore itself:"

"Our source describes the Valley of the Sleeping Dragon set as a hilly, seaside location with a temple at its center with the greenscreen serving as the seashore itself. The other huts each serve their own purposes but the other noteworthy feature is the large, bamboo structure known as the battle dome which is surrounded by an area where the village’s warriors hone the skills necessary to protect Fin Fang Foom."

Murphy also speculated that the previous casting rumors that had ties to the Genghis Khan flashbacks might refer to the elite protectors of The Valley of the Sleeping Dragon, and their source indicates that "while they are keeping a shapeshifting alien that looks like a dragon tucked away they might just have their own dragon to help them fight off invaders:"

"These elite warriors have devoted their lives to keeping at bay what is described as an ancient evil bent on the destruction of mankind. But, it seems, they are not alone in keeping this ancient evil asleep as our source indicates that while they are keeping a shapeshifting alien that looks like a dragon tucked away they might just have their own dragon to help them fight off invaders! The warriors wield shields and spears made from dragon scales (see our staff artist’s rendition of them below) in addition to one more incredibly powerful weapon: chi."

Lastly, Murphy shared that their source revealed that "the village is led by an elder known as “Huang Bo” and he is joined by Michelle Yeoh's unnamed character. Both characters are described to be "fierce protectors:"

"In addition to the set description, our source adds that the village is led by an elder known as “Huang Bo” (this may or may not be his actual name but it most certainly is the character described in an old casting call searching for a male, 40-60 known as a wise, old statesman and the leader of his village) and he is joined in the village by another fierce protector: Michelle Yeoh’s character."

The addition of Fin Fang Foom in Shang-Chi's narrative presents an interesting possibility, and the new details uncovered by Murphy will certainly add fuel to the fire. While Shang-Chi is poised to offer more answers about the origin and the continued existence of Fin Fang Foom, the description of the creature's lair provides an added layer of intrigue on how it will all come together.

A previous rumor already claimed that Shang-Chi will use elements from the Doctor Strange franchise to keep the dragon asleep, and this new discovery from Murphy's source provides more context on that aspect. This is another evidence of the MCU's interconnected storytelling, and borrowing elements from one franchise to another amplifies that notion. No doubt, seeing The Valley of the Sleeping Dragon, along with the added element of magic (or chi), on the big screen will certainly be a visual treat to many fans.

The presence of fierce warriors is a no-brainer for a Martial Arts film like Shang-Chi, but it will be interesting to find out how Marvel Studios will tackle this particular story element. From Fin Fang Foom's looming presence to The Mandarin's menacing plan, Shang-Chi is shaping up to be an exciting addition to the Phase 4 slate of the MCU.