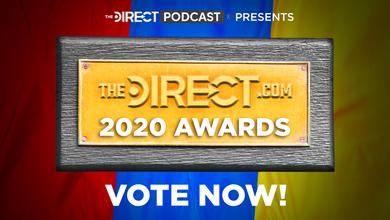 Some year that was.

While 2020 was not everything we initially expected, we did have some pretty special moments this year. From TheDirect.com officially launching, to The Mandalorian crushing its sophomore season, to a new villain announced to return for Tom Holland's Spider-Man 3 just about every week, we have a lot to look back fondly on.

With that being said, we are proud to announce the first annual The Directies, an award show presented by The Direct Podcast voted on by YOU, the fans!

Voting is now open, click here to cast your votes!

The categories and nominees are...

MCU Breaking News of the Year

Fantastic Four is coming to the MCU

Doctor Strange will appear in Spider-Man 3

Guardians of the Galaxy: The Holiday Special coming to Disney+

DCU Breaking News of the Year

Ben Affleck returns as Batman for The Flash movie

Michael Keaton returns as Batman for The Flash movie

Wonder Woman 1984 premieres on HBO Max for no extra charge

Temuera Morrison cast as Boba Fett, appears in The Mandalorian

Rosario Dawson cast as Ahsoka Tano, appears in The Mandalorian

Trailer of the Year

The Falcon and the Winter Soldier, Disney Investor Day

Casting of the Year

Jonathan Majors cast as Kang the Conqueror for Ant-Man 3

Christian Bale cast as Gorr the God Butcher for Thor: Love and Thunder

Colin Farrell cast as The Penguin for The Batman

Return of the Year

Rumor of the Year

Charlie Cox rumored to return as Daredevil for Spider-Man 3

Justice League: The Snyder Cut will be Rated R

Project of the Year

Jon Favreau, Creator and Executive Producer of The Mandalorian

Dave Filoni, Director and Executive Producer of The Mandalorian

Event of the Year

Podcast Segment of the Year

To cast your votes, click here! Voting closes at 12 p.m. ET on Saturday, January 2, 2021. Tune in to The Direct Podcast this Sunday for the winners!