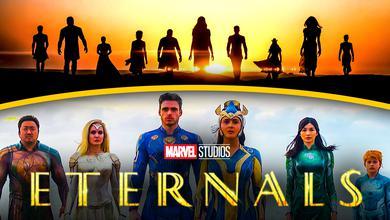 After the literal drought of content in 2020, Marvel Studios is bringing it this year having already released three MCU series on Disney+, and Black Widow is mere weeks away from its theatrical release.

But, that's not all. In addition to three other Disney+ series, the studio is set to release two other Marvel stories into the MCU later this year with Shang-Chi and the Legend of the Ten Rings followed by the Eternals. Oh, and a little movie called Spider-Man: No Way Home, too.

However, for Disney's marketing wizards, the sheer wealth of Marvel content requires strategy, especially ahead of Eternals.

In an interview with The Hollywood Reporter, Disney Marketing Executive Asad Ayaz discussed having to "work backwards" and the marketing strategy in play for the Eternals:

"With Loki, you look at the release date of your film or series and you kind of work backwards from that based on the story you want to tell over the course of the campaign. We put a lot of thought and a lot of creativity into what we want the fans to experience, what we want to fans to own when they see the film and not necessarily spoil it pre-release."

Now that Loki is underway, it seems that Ayaz and Disney's marketing teams are shifting more focus to Eternals. The film is releasing on November 5, 2021 and its first teaser amassed 77 million online views within its first 24 hours and raised just as many questions as it answered.

But, according to Ayaz, th fact that "it really gave nothing away" was by design. Ayaz also indicated that much more promotion is in the pipeline, teasing that "we have so much more to do on that:"

"If you saw the Eternals teaser, it really gave nothing away. It’s just an introduction to the characters and tone. It was a very, very early tease. We have so much more to do on that. We will be very judicious because we do have other films and shows prior to Eternals hitting. And Eternals is such a special movie with all-new characters, and we have two Marvel movies prior to that. So that gives us an advantage in using those to expose people more to Eternals, but also spacing things out."

Since Eternals looks to be such a different film with a full cast of newcomers to the MCU, it makes sense for the marketing campaign to be more of a slow burn. But, something different isn't anything new for Marvel Studios.

For years, variety has been an essential ingredient to Marvel's secret sauce. It's why the studio can release so much content without fear of fan fatigue.

Whether it's a film or Disney+ series, each project is guaranteed to be unique and distinct. And, while it's on Ayaz and Disney marketing to make sure these differences shine through in promotion, the originality the studio keeps bringing certainly assists in their endeavor.

According to Ayaz, the uniqueness of each project in the 2021 slate guarantees that they "don't feel they are bleeding into each other or redundant or repetitive in any way:"

"Loki and Black Widow are two very creatively unique properties. You look at the Shang-Chi trailer and the Black Widow trailer and the Eternals trailer teaser, they are all completely unique. They don’t feel they are bleeding into each other or redundant or repetitive in any way. So that’s a wonderful thing for us to have as a marketing team. We are making sure that the way fans experience them is unique and special and it doesn’t feel like you’ve got all these different Marvel properties hitting you at the same time."

While Marvel Studios is a content machine, Disney's marketing team is as well by default, and hearing Ayaz's perspective on the marketing team's strategy is fascinating considering they are the bridge between the studio and the eagerly-awaiting fans.

In addition, it's also interesting to hear Ayaz's thoughts on Eternals which, as he says, is "such a special movie with all-new characters."

His promise of having "so much more to do" regarding that film means fans have only seen the tip of this film's marketing.

In addition, the fact that Black Widow and Shang-Chi are releasing ahead of Eternals presents marketing opportunities to continually introduce audiences to this new roster of characters. It's just another example of how Marvel's insane number of films and series can be used to its benefit as opposed to its detriment.

Eternals is set to release in theaters on November 5, 2021.