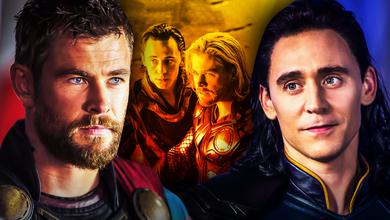 Marvel Studios may have more than two dozen movies and TV shows set for release over the next two years, but there's always time for MCU fans to reminisce on what's now 13 years of history in the expansive franchise. Phase 4 is already two entries in, although this time of year brings celebrations for multiple anniversaries of past movies.

Robert Downey, Jr. took to social media to celebrate the two-year passing of Avengers: Endgame with the deleted scene of him with Katherine Langford's Morgan Stark in the Soul World. This movie came into the spotlight again thanks to images from both Tessa Thompson and the Russo brothers, while Tom Holland celebrated Avengers: Infinity War's release with a video from the day he shot his death scene.

Today brings a new anniversary celebration post, although it's for a movie that premiered a full decade ago within the MCU.

Thor star Chris Hemsworth took to Instagram to celebrate the ten-year release anniversary of Marvel Studios' Thor, the MCU's fourth movie, which premiered on May 7, 2011.

Hemsworth included a picture of himself with Loki actor Tom Hiddleston along with a screenshot from an article announcing their casting in 2009 with the headline "Marvel Rolls Dice, Casts No-Names for Thor." The MCU veteran posted the two pictures with the following caption:

"This year marks the 10th anniversary of THOR when two unknown lads were given the keys to the kingdom. It’s been a hell of a ride and we clearly haven’t aged a day"

WHAT A RIDE IT'S BEEN

To think the MCU wasn't always the most popular franchise in pop culture.

Chris Hemsworth made his first appearance as the God of Thunder in the 2011 summer blockbuster alongside Hiddleston in both characters' first full-length live-action adventure. The movie explored the brothers' complicated relationship through Thor's banishment and eventual return to power, setting Loki up as a formidable villain/anti-hero in a film that grossed nearly $450 million globally.

Both have since made their Marvel characters the most iconic roles of their careers, still going strong through Phase 4 and beyond.

Hemsworth is currently filming in Australia for the massive Thor: Love and Thunder while Hiddleston is less than a month away from officially starring in the Loki Disney+ series, which is building considerable hype. Both will also return to their roles in the animated What If...? series on Disney+, which comes this summer.

For now, the celebration continues for both actors' first MCU appearance, which set the stage for impressively long runs in eight of the MCU's movies in the Infinity Saga.

Thor is available to stream on Disney+.