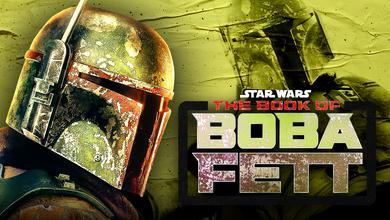 Audiences who watched the Season 2 finale of The Mandalorian were shocked not once, but twice, last December. The first, of course, was the return of Luke Skywalker while the second was a Marvel-esque post-credits scene announcing a new, surprise series: The Book of Boba Fett.

While Season 3 of The Mandalorian will be a thing eventually, Lucasfilm clearly has another story to tell all with the galaxy's fan-favorite bounty hunter — Boba Fett.

But apart from Temuera Morrison reprising his role as Boba along with Ming-Na Wen as Fennec Shand, details have been scarce about the series despite its December release.

However, The Mandalorian's Brendan Wayne, a stunt who plays Mando when actor Pedro Pascal isn't needed, has shared a bit of what fans can expect from The Book of Boba Fett series when live-action Star Wars returns to Disney+.

While a guest on the Star Wars Sessions podcast, Brendan Wayne not only talked about filming both seasons of The Mandalorian, but also Robert Rodriguez as a director and how Boba is different from Mando.

Robert Rodriguez directed the episode from Mando's sophomore season titled "The Tragedy" where audiences finally saw Boba Fett represent as he smashed in Stormtrooper helmets and lay waste to an entire unit.

Much like the Star Wars fan base, Wayne loved this version of Boba and told Rodriguez as much, saying, "Your Boba Fett identity — that is so clear — is so separate from Mando's identity, and it's beautiful what you did."

Even though Boba Fett debuted in the notorious, animated Star Wars Holiday Special and appeared in both The Empire Strikes Back and Return of the Jedi, he received very little dialogue or screen time despite his popularity.

He did return to the big screen in Attack of the Clones, but this time a young boy where fans learned he was actually a clone of his father, Jango Fett.

Star Wars: The Clone Wars animated series also included him in several storylines to show how he survived after Jango's death and how he became a bounty hunter himself. But still, fans had never seen adult Boba's skills on full display until Mando's Season 2.

In addition, being a character of few words in the original trilogy, Rodriguez needed to establish who Boba is as an adult and how he's different from Mando. So, apart from the beskar and helmet, who is Boba Fett?

Well, according to Rodriguez, who Wayne quoted, Boba Fett can be summed up as, "All killer, no filler."

Wayne also conveyed that The Book of Boba Fett series will reflect Boba's true nature, not Mando's, in saying:

"I think that's what we as an audience, I think, are going to get from The Book of Boba Fett. A lot more of that kinda feel. He gets even grittier than Mando did. I feel like he doesn't have the choice because he really was a different kind of character."

HAS LUCASFILM LEARNED FROM THE MCU?

Despite what some fans and audience members originally thought, it doesn't sound like The Book of Boba Fett will be Season 2.5 of The Mandalorian.

In fact, Wayne's comments about the "grittier" feel and how different Boba is from Mando indicate that the series will truly be its own distinct thing with its own unique style.

Maybe Lucasfilm has learned from the Marvel Disney+ series that each show can be fresh and unique while still part of the same universe; but since there's only been one Star Wars live-action series so far, it may still be too early to tell.

What fans can take away from Wayne's commentary is that Robert Rodriguez's tone, fighting style, and take on the character is likely what audiences will see on-screen later this year.

The Book of Boba Fett is set to release on Disney+ in December 2021.