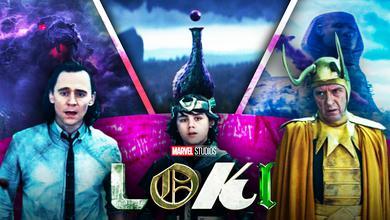 Warning: This article contains spoilers through Episode 5 of Loki.

The fifth episode of Loki titled "Journey Into Mystery" not only set up the time-centric series' climactic finale, but it also introduced The Void — a dead timeline that serves as the TVA's dumping grounds.

It's here that Loki finds himself after having been pruned in Episode 4, along with other versions himself that include a Gator and even Throg, a frog version of his brother Thor.

While the design and world-building in Loki has been as much of a star as the God of Mischief, The Void also served as a literal treasure trove of Marvel Easter eggs and references, as well as a blank canvas for the team to create places and creatures with no history or connection at all.

THE VOID IN LOKI'S EPISODE 5 WAS SURREAL

In an interview with CinemaBlend, Kasra Farahani, the head of the series' production design, clarified what in The Void was inspired by the comics and what was the result of his team's creative choices.

In regard to the bizarre, purple birds and those giant heads Loki and his various selves were standing by during their first argument, Farahani admitted, "That was really just a visual thing" and attributed the choice to an attempt at "surrealism."

"The big giant hands, they were... I don't have a clear story for that one. That was really just a visual thing, because we were trying to find moments to infuse The Void with surrealism. So that was the point of the giant heads, and also of the little Void creatures that look like the little peacocks."

But for fans who thought The Void was strange from the start, it was originally much stranger and a "far more Salvador Dali-esque, Dada-esque version...:"

Dada was an art movement from the early 20th century which put focus on the nonsense and irrationality of creative work, encouraging artists to throw out conventions to create objects and environments that can't be found in our reality.

While reality is often up for debate in Loki, Farahani also talked about bringing the bizarre scenery of The Void to life and which elements were physical sets for the actors and which were CGI saying:

"Yeah, so we built a really large chunk of Void terrain inspired by the moors in England. We built a chunk of this on stage, and if I remember correctly, it's in the area of like a 150ftx200ft space of terrain that we built. Then we brought in different elements to make it feel like different parts of The Void. So for example, the bus stop that he arrives on was one set-up. The giant heads were another set-up. The drive-in movie theater, where Sylvie wakes up, is another set."

All in all, Farahani explained,"there's a total of seven or so different set-ups" shot "over seven days," including the barbershop where Mobius mulled the likelihood of Gator Loki.

But perhaps the Loki Palace was the most impressive in that this separate set was a "full 360-degree environment."

"So that was all built, and then of course the barbershop was another one. We built that barbershop on that same terrain. And finally, the Loki Palace, which was another set entirely, but that was entirely built as a full 360-degree environment; no set extension in that."

THE PHYSICAL WORLD BUILDING IN LOKI

While it would've been easy for Marvel Studios to rely on CG for Loki's various cosmic locations that, again, had the potential to be even weirder, it's great to hear that the team went for physical sets and that the studio supported that.

Not only do physical sets tend to produce better performances from the actors, but they tend to hold up over time and lend to the believability of the show's new, surreal locations.

Now some fans may be frustrated to learn that the purple birds and giant heads aren't Marvel Easter eggs, but rather there for the sake of design alone.

However, their inclusion does speak to the production team's efforts at world-building.

And, considering the number of locations audiences have seen in Loki's five episodes thus far, as well as the strange nature of The Void, the fact they were able to bring something so new and distinct to the screen and in a physical format is truly impressive.

The first five episodes of Loki are streaming now, exclusively on Disney+.