Loki Reviews: What are the Critics' First Reactions? 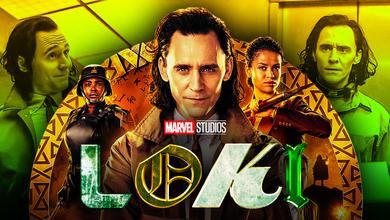 Fans cannot wait, as it is only a handful of days away from Loki, the MCU's latest streaming adventure coming to Disney+.

Loki follows the 2012 version of everyone's favorite God of Chaos who was last seen escaping with the Tesseract in Avengers: Endgame. The show will run six episodes, with the first premiering June 9; however, some lucky fans have gotten to see Loki's debut early.

The social media embargo for Loki has been lifted, with critics and fans given the opportunity to view the first episode and freely share their first impressions of the third Disney+ offering from Marvel Studios.

Brandon Davis of ComicBook.com said that Tom Hiddleston is "just too good in the role" and that it comes with "awesome details for MCU fans:"

#Loki has hands down my favorite first TV episode for Marvel Studios yet.

Tom Hiddleston is just too good in the role, picking up 2012’s Loki instantly. He’s brilliant.

Early exposition comes with awesome details for MCU fans. I really like the start. Lots of potential here! pic.twitter.com/wY6HiYzGHC

Erik Davis of Fandango loved the first two episodes, proclaiming they are "laying the groundwork for the MCU multiverse:"

I've seen the first 2 episodes of #Loki & I'm LOVING it so far. It's a time-traveling detective show that's laying groundwork for the MCU multiverse while also being about identity & confronting ugly truths about ourselves. The Tom Hiddleston/Owen Wilson bromance is my favorite pic.twitter.com/w9yLLHGEHJ

Steven Weintraub, editor-in-chief of Collider, said that Tom Hiddleston is "still perfect" and that he loved how the MCU is "expanding" in a new direction:

first two episodes of #Loki are fantastic. Obviously @twhiddleston is still perfect in the role but I love how the series is expanding the MCU in a new direction and we're watching Loki try and figure out what's going on rather than having him in control. pic.twitter.com/TP45W73bvi

Movie pundit, Giovanni Campea, described the first two episodes of Loki as "unlike anything [Marvel Studios have] done before:"

The @LokiOfficial show is outstanding. Marvel continues to change things up, this is unlike anything they've done before. A focus on the god of mischief that gives us our best look at his character, his fears, his insecurities and his glorious purpose. Oh, and Owen Wilson rocks pic.twitter.com/jKERNTakMA

I’ve seen the first two episodes of #Loki and it’s as fun, funny, odd and twisted as I’d hope and expect from the God of Mischief! Love the snarky bromance between #TomHiddleston and #OwenWilson. More of everything please!!! pic.twitter.com/d9WZaLtE4n

Film critic, Paul McGuire Grimes, said that Marvel fans should be pleased by "the playful banter between Hiddleston and Wilson:"

I’ve watched the first two episodes of #Loki Should please Marvel fans with the playful banter between Hiddleston and Wilson. They’re setting up the multiverse angle hard core hopefully setting up what’s to come in the MCU. Coming Friday to @disneyplus Look for my review soon! pic.twitter.com/IlEccDDYaE

POC Culture compares Loki to Manhunter and Men in Black, but also said that "The first episode is solid but the second is REALLY good:"

#Loki is already my favorite Disney+ series. With an almost Twilight zone sci vibe mixed with a buddy cop time mystery, I’m 100% on board for this whacky adventure. The budding relationship between Hiddleston & Wilson is key, but it’s the differing timelines that have me locked! pic.twitter.com/bWYqJYx0nW

Awards editor for Discussing Film, Diego Andaluz, praised the show for its charismatic performances, writing, visuals, and direction, calling it Marvel Studios' "most ambitious project yet:"

WOW! #LOKI may just be the BEST series of the #MCU so far. With a charismatic performance from Tom Hiddleston, remarkably clever writing, and stunning visual craftsmanship brought together by sharp direction, it results in Marvel’s most ambitious project yet! A MUST WATCH! pic.twitter.com/tcQsEYbKXJ

Ariel, another editor at Discussing Film, had a more critical reaction, saying that the first episode was "a rough start," which was "poorly paced" and showcased an "awkward" performance from Hiddleston. However, he stipulated that the second episode is a "set up" and hopes that the show continues to improve:

#Loki gets off to a rough start with ep. 1, which is poorly paced and written but necessary to introduce the world of the TVA. Ep. 2 is a step up from that, the plot is introduced and the stage is set for a hard-hitting rest of the season.

The dynamic between Tom Hiddleston and Owen Wilson is a lot of fun to watch but even Hiddleston's usually top-notch performance in the role feels awkward in the first episode. Everything shapes up in the second one, though, and I'm hoping that #Loki will only go up from there. pic.twitter.com/3Jh56UoPYa

Nora Dominick, TV editor for BuzzFeed, said that the show explores the depths of Loki's character and that she's "so excited to see where this show goes:"

Just like how WandaVision allowed Elizabeth Olsen to explore the depths of her character, #Loki allows Tom Hiddleston to do this same. I'm so excited to see where this show goes and if the first episodes are any indication, we are in for a RIDE pic.twitter.com/0vbATTrNN5

Perri Nemiroff from Collider commented that the show's TVA has "Beetlejuice vibes" and loves the established timeline rules and how Loki will be confronted with his past (and future) actions:

A big ol' YAY for the Beetlejuice vibes of the TVA! After two episodes, #Loki looks like it's VERY much my thing. Fascinated by the TVA and the timeline rules I'll no doubt obsess over. And love how the story is challenging Loki to assess/reassess his actions. pic.twitter.com/raD9QC78O1

ENJOYABLE DYNAMIC BETWEEN TOM AND OWEN

The most consistent praise that the first two episodes of Loki have gotten from critics and fans is the dynamic between Tom Hiddleston and Owen Wilson being fantastic. Not to mention the feeling of freshness from this series compared to everything else that has come before from Marvel Studios.

Loki was compared to other franchises like Twilight Zone, Men in Black, and even the suspenseful Manhunter. The latter of which may imply much more about the mystery aspect of the series, with the God of Mischief and Mobius hunting a time-traveling killer.

Loki is set to premiere on Disney+ on June 9.