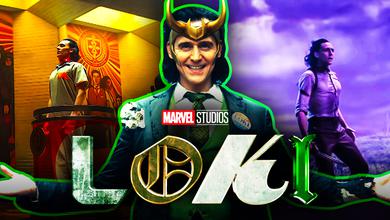 While there's a lot of MCU content to look forward to these days, such as Black Widow (finally!), Shang-Chi and the Legend of the Ten Rings, and the mysterious Eternals, one of the most anticipated is actually Marvel's next Disney+ series: Loki.

Yes, it's true that Loki redeemed himself and was killed by Thanos in Avengers: Infinity War. But this Disney+ isn't about that Loki.

Instead, Loki focuses on the God of Mischief from 2012's The Avengers who stole the Tesseract during the Avengers: Endgame time heist.

And while Tom Hiddleston's reprisal is enough to get Marvel fans excited, this series also involves time travel, the introduction of the mysterious Time Variance Authority, and Owen Wilson's debut in the MCU.

Now as promotion ramps up for the series' June 9 release, fans are now hearing more about what to expect from the show's creators.

In an upcoming interview with Entertainment Weekly, via Twitter user princloki, Loki's head writer Michael Waldron discussed his excitement in "building a new corner of the MCU."

According to the article,

"Loki begins with the Time Variance Authority – an organization tasked with safeguarding the timeline – arresting Loki Variant because they want his help fixing all the timey-wimey problems he created while on the run with the Tesseract."

But for those who appreciated Loki's completed arc in Avengers: Infinity War. No need to worry.

This Loki won't be able to escape himself either as, according to Waldron, the TVA is "uniquely suited to hold up a mirror to Loki," allowing him to "confront who he is."

"Loki's a character that's always reckoning wit his own identity, and the TVA, by virtue of what they do, is uniquely suited to hold up a mirror to Loki and make him really confront who he is and who he was supposed to be. The TVA is just an entirely new world [with] a new cast of characters, and that's what felt most exciting about the show: building a new corner of the MCU."

Loki director Kate Herron is equally excited about how the series introduces Owen Wilson into the MCU as the character of Mobius.

According to the director, Mobius "is, essentially, Loki's handler;" and according to her, Wilson and Hiddleston "have amazing chemistry."

A SHOW BURDENED WITH GLORIOUS PURPOSE

Both WandaVision and The Falcon and the Winter Soldier on Disney+ have been drastically different from one another in regard to genre, theme, and style of storytelling.

And while Marvel fans are very well-acquainted with the God of Mischief at this point, this new series looks to continue the tradition by offering something completely fresh and different.

The show has already broken the Disney+ mold in that it will be the first series to premiere on Wednesdays as opposed to Fridays, but what really has fans scratching their heads is that the creators' inspirations for the series include "Blade Runner, Mad Men, and, most curiously, Teletubbies."

Clearly, Marvel fans haven't seen anything yet, and that's just how Loki would want it.